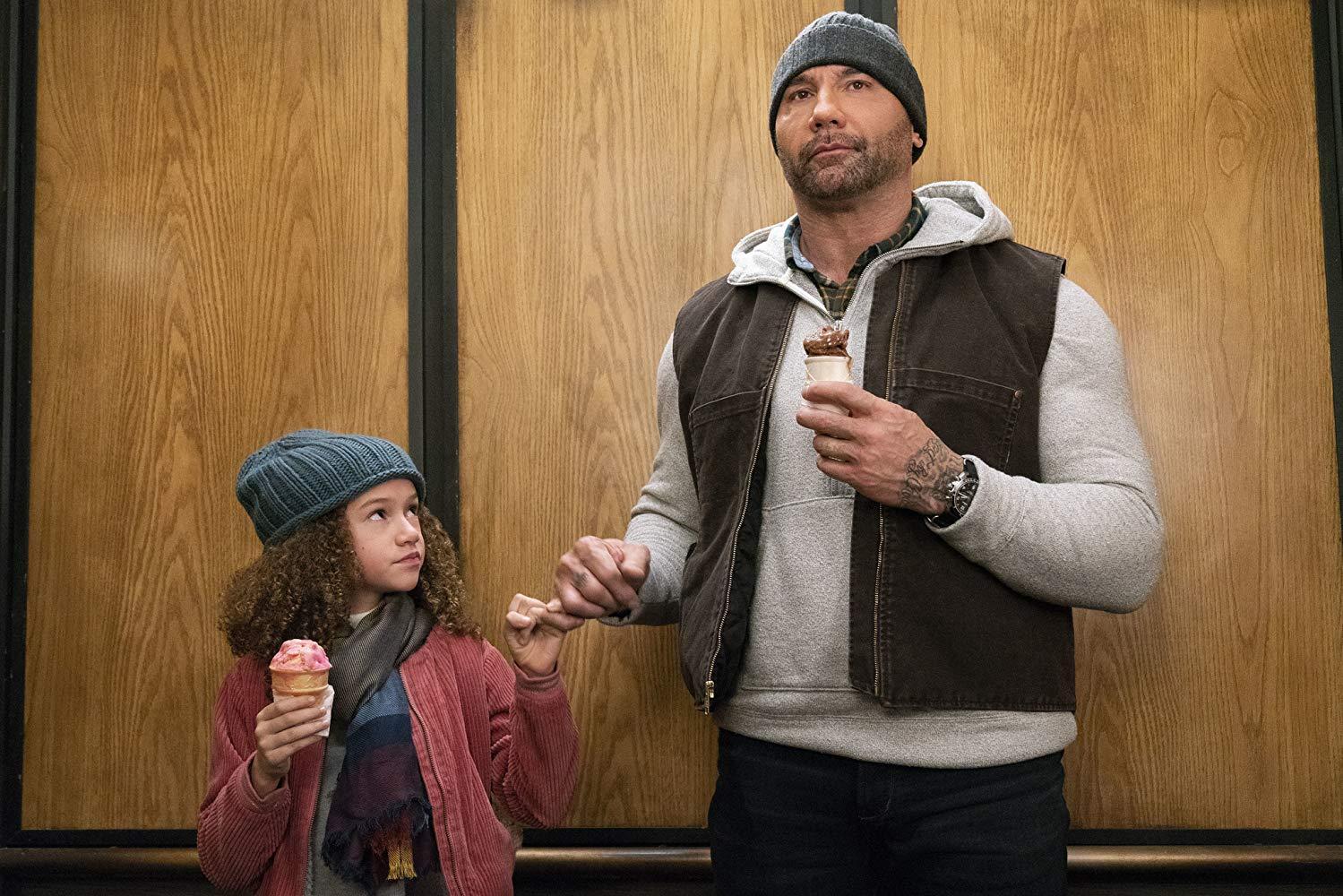 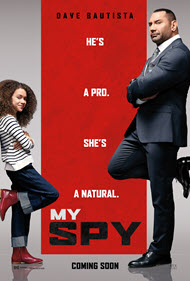 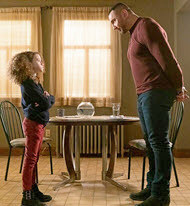 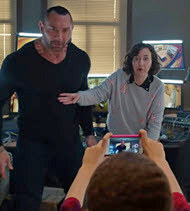 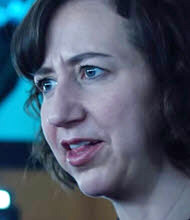 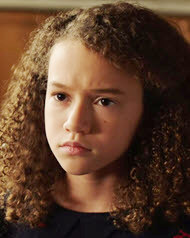 Action comedies for youth have often delighted me but this film so repelled my conscience that I only got one hour into the 1 hour 40 minutes then walked out. Nevertheless, I’ll attempt to give you an idea of its content.

First let’s survey the situation. This spy mystery features a demoted CIA soldier named JJ (Dave Bautista) who finds himself blackmailed by savvy 9-year-old Sophie (Chloe Coleman), whose family he is meant to be surveilling. While JJ teaches her the ins and outs of espionage, the seemingly-sweet Sophie forces him to get in touch with his civilian side—in other words, to appreciate life, fun and relationships. But as JJ continues to break all the rules will he be able to keep his new friends, AND foil a terrorist plot?

In terms of moviemaking, “My Spy” certainly ticks boxes for casting, visual effects and soundtrack. I love the creative choice to pair slow-motion lunges with opera, perfectly suiting the open-mouthed and wide-eyed expressions of criminals thrown by a blast. I also feel blown away by the expressive acting skills of all main characters. There are fun snippets of songs used to highlight Bautista’s willingness to laugh at himself in his macho role. Unfortunately, though, any amount of finesse in these factors is dragged down by the script’s general immorality.

Other positives include some genuinely hilarious gags and some harmless slapstick moments which I’m sure producers enjoyed setting up.

Negative content mainly involves frequent profanities, heavy crudity, shocking lawlessness, bullying and manipulation. These go well beyond your typical action comedy. For example, misuses of the Almighty’s names occur at a rate of about one every four minutes, and various body parts are also mentioned as curses. Steroid use is shrugged off. A government surveillance expert shares a tip for succeeding as a “genius pervert.” Adults repay bullying for bullying on small children. Intellectual adultery is played with in jest as classroom mothers walk away from their husbands to feel a man’s muscled arm and see his war scars, while their eyes look him up and down suggestively. In presence of a child, a main character suggests killing her and torching the house to cover it up. As you can see, the film is purposefully provocative, which our society now sees as ‘just entertainment,’ yet we, as Christians, know can be very harmful in reality.

Other similar factors are stereotype issues such as use of frequent allusions to LGBT people in somewhat ridiculous fashion, and ‘geek’ tech specialization, which the film pairs with knitted sweaters, ugliness, Lesbianism and social awkwardness. Someone is teased about their unemployment status. A soldier talks to children about his job “taking out the garbage: human trash” and gives too much detail about what soldiers sometimes have to eat and drink in the wilderness.

Other factors to be aware of include occasional sightings of alcohol, and a teacher’s unprofessional behavior. There are also product placements for a prominent corn crisp brand and two popular new technologies.

Another aspect particularly troubling to me is the use of child actors in roles that require deliberate evil and adult speech—such as casually and falsely referring to one’s mother as working in prostitution, or to a man seducing her. What healthy 9-year-old talks in this way? A child also engages in highly risky activities such as getting herself invited into strangers’ houses on false pretenses, handling weapons without training and confronting dangerous people. Adults barely hesitate to train her in how to lie convincingly and attack people. Other child actors are heavily involved in insulting language, cyber-bullying and even physical attacks, and as a comedy this can not be sufficiently addressed in an appropriate way afterward for the viewer, such as to impress the issue’s seriousness and direct strugglers to help.

Deeply underlying everything, there is a distinct cold-heartedness about life, and shallowness regarding character, friendship and what are meant to be noble roles in society. We like to see children’s purity celebrated and protected, not shattered and joked about. We need to see role models who do not practice deceit in order to succeed, but who value truth and goodness. And although the world is a dark place at times, the answer is not to become hardened and ‘cool’ or to make friends with the darkness. The answer is to seek first God’s kingdom and righteousness, take refuge and comfort in Him, and trust Him to work out the messy details, as He is clearly doing by provision of our Lord Jesus, Who solves so many of our huge problems.

In summary, “My Spy” is the sort of film that grieves us as Christians and offends in every way. Its disrespect to both God and people is troublesome, and I struggle to believe that any Believer could enjoy it. Children and teens especially need to be protected from its immorality and heavy scariness, and neither should adults condone it.

Positive
Positive—I hesitate to say that we enjoyed this film after the reveiwer stated that no Christian could enjoy this film. However, we did enjoy this movie. We were not aware that it was supposed to be a family film, simply because there was a child in a lead role. It is definitely not “The Game Plan,” which was a PG rated Disney movie. This movie is rated PG-13. When our kids were younger, we never assumed that a PG-13 movie was going to be appropriate for them. So, watching this as adults and with our adult son, we laughed out loud many times and thought it was an enjoyable movie. It was actually pretty clean for PG-13, a rating which allows some extreme language and sexual situations.

We viewed this as a fun popcorn movie with some laugh out loud moments of unexpected humor thrown in. It is not a Christian movie. No one in the movie claims to be a believer, and no one in the movie acts like a believer. And with a PG-13 rating, it is not a kid-friendly or young family movie. See all »
Much of the criticism that I see in the review is aimed at the comedy of the movie. Are we allowed to say funny things any more? Do we expect secular movies to stick to Christian principles? Is someone vomiting really a trigger moment when it is played for laughs? I think if we are going to watch any secular movie, we are going to be able to see the sin in the hearts of those who have created it…

I understand the reviewers comments about what we would like to see, which is in keeping with Phillipians 4:8… “Whatever is true, whatever is noble, whatever is lovely, whatever is admirable—if anything is praiseworthy—think about such things.” In a perfect, unfallen world, movies would reflect all that God’s word calls for regarding treatment of others, the protection of children’s innocence, etc. However, when we see unbelievers acting like believers, while never giving any of the glory to God, and doing all these things in their own strength, then we encourage the notion that we can be “good” in our own strength and without the saving grace of God. When I see a secular movie, I expect to see unbelievers acting like unbelievers, and if that is something that is offensive to me, than I need to forgo watching most films.
My Ratings: Moral rating: Average / Moviemaking quality: 4

Kay, age 56 (USA)
Negative
Negative—I choose to watch this in advance. We have 3 kids and our youngest wanted to watch it because of the cute girl in the trailer. Wow, am I glad I watched it first. First off, I wouldn’t even recommend this movie at all, it’s not that good. Also, their neighbors next door… yea a Gay couple who are supposed to watch Sophie from time to time (and they just moved in), what? Are you kidding me?? I would never let a Gay couple watch my daughter from time to time—ever! So, this was disturbing to say the least.

There was funny humor in the trailer, honestly I didn’t see any humor in the movie. There is a lot more cursing than I thought was really necessary. Give me a break! This is rated PG-13 for a reason. Don’t let your 7 year old talk you into seeing it. We thought it was going to be like “The Game Plan” which was pretty clean and cute. Nothing, I mean nothing like that one. Steer clear—and just know, you have been warned!
My Ratings: Moral rating: Extremely Offensive / Moviemaking quality: 2

Secular Movie Critics
…much of the humour here has a willfully dark, queasy streak…
Jake Wilson, The Sydney Morning Herald (Australia)
…a humorless misfire… the only thing that ever surprises is its ability to cut short good gags and smart character development… It doesn’t have the appeal for anyone.
Kate Erbland, IndieWire
…the film features a violent opening action sequence with lots of gunfire and killing. Was there really no way for the makers of a family film to think up an action scene that didn’t involve the need for machine guns and a body count?… The strained attempt to fashion mean-looking ex-pro wrestler Dave Bautista into a family-friendly star a la Dwayne “The Rock” Johnson falls largely flat… his manner is too gruff and wooden to bring the necessary warmth needed. …[2/5]
Jim Schembri, 3AW
…I can’t say it’s very good, because it isn’t. But the magnificent walking, talking, pratfall-taking sight gag that is Dave Bautista? Well cast. …The gay neighbors, played by Devere Rogers and Noah Dalton Danby? Kids are never too young to learn gay stereotypes. … [1½/4]
Roger Moore, Movie Nation
…how antiquated and unimaginative MY SPY is much of the time, and how clumsily it tends to its mixture of comedy, action, and romance. …ultimately sunk by a reliance on clichéd character types… [1½/4]
Derek Smith, Slant
…isn’t funny enough for teens, but not really suitable for younger viewers either… doesn’t feel totally suited to any member of the family… [2/5]
Ben Travis,·Empire [UK]
…a hot mess, full of more confused character motivations and emotional blackmail than the season finale of “Love Is Blind.”…
Chandler Levack, The Globe and Mail (Toronto)
…This forgettable film is too rough for younger kids and too stupid for the grown-ups. …
Richard Roeper, Chicago Sun-Times
…too many groan-worthy gags…
Richard Kuipers, Variety
…fails to deliver material that even remotely entertains… It sadly isn't sure what type of movie it wants to be though, and in dipping its toe into so many options it drowns itself in a sea of indecisiveness. …[1½/5]
Peter Gray, Brisbanista