for strong violence and gore, language throughout, some sexual references, drug use and brief graphic nudity. 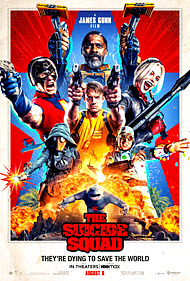 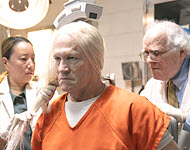 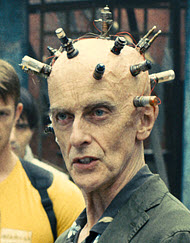 Strong and unnecessary violence and bloody gore in entertainment 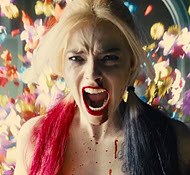 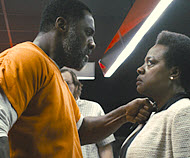 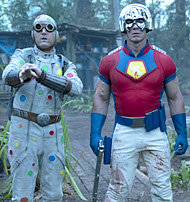 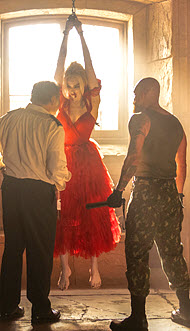 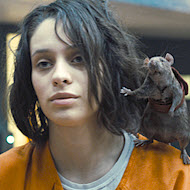 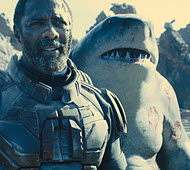 Here’s what the distributor says about their film: “Welcome to hell—a.k.a. Belle Reve, the prison with the highest mortality rate in the US of A. Where the worst Super-Villains are kept and where they will do anything to get out—even join the super-secret, super-shady Task Force X. Today’s do-or-die assignment? Assemble a collection of cons, including Bloodsport, Peacemaker, Captain Boomerang, Ratcatcher 2, Savant, King Shark, Blackguard, Javelin and everyone’s favorite psycho, Harley Quinn. Then arm them heavily and drop them (literally) on the remote, enemy-infused island of Corto Maltese. Trekking through a jungle teeming with militant adversaries and guerrilla forces at every turn, the Squad is on a search-and-destroy mission with only Colonel Rick Flag on the ground to make them behave…and Amanda Waller’s government techies in their ears, tracking their every movement. And as always, one wrong move and they’re dead (whether at the hands of their opponents, a teammate, or Waller herself). If anyone’s laying down bets, the smart money is against them—all of them.”

Neutral
Neutral—Yes, it’s a “superhero” movie. No, it’s not that kind of superhero movie. If you’re looking for a “Guardians of the Galaxy” type James Gunn film, look elsewhere. This is Guardians of the Galaxy if it were filmed with the intent of getting an NC-17 rating. At times it is funny and entertaining, but only in that it appeals to the basest parts of human nature. Definitely not for young kids or anyone who is offended by strong language (lots of it), violence (and gore), or overt sexuality.
My Ratings: Moral rating: Very Offensive / Moviemaking quality: 3
Don, age 57 (USA)
Neutral—Not the best not the worst, not lighthearted, though does have funny moments. Over much use of blood and gore, camera dwelling too long on gruesome scenes it didn’t need too. Foul language.

Got the characters pretty much right Margo Robbie’s Harley Quinn showed her limited code of ethics, by not liking one of the bad guy’s plans to hurt children. At least that was something, compared to the others her and Rat Catcher 2 were the only ones to show any type of moral boundaries.

Not for children. Sadly, Warner Brothers isn’t producing superhero films that can be enjoyed by audiences young an old alike.
My Ratings: Moral rating: Offensive / Moviemaking quality: 3
David, age 58 (USA)
Negative
Negative—This was one of the worst and most disgusting films I have seen. The over the top gore (often played for laughs and shock value) is bad enough but the sexual “humor” was even worse.

There is both male and female nudity and a scene where one of the Squad is in his underwear. In that scene it is clear that he has a double penis (two separate bulges are shown in different directions), obviously played for laughs as well.

Overall the film was truly terrible from both a moral perspective and a cinematic one. Gunn’s humor worked in “Guardians of the Galaxy” but with no constraint his humor largely consist of juvenile putrid shock and potty humor. Please avoid this movie at all cost.
My Ratings: Moral rating: Extremely Offensive / Moviemaking quality: 1
Dr. David, age 54 (USA)
Secular Movie Critics
…“The Suicide Squad” walks about as far up to the line of the indecent as is perhaps possible for a film of this size right now… merry nihilism… too busy giving all that pious worldbuilding the finger…
Richard Lawson, Vanity Fair
…supergory, merrily heartless in its body count and its methods of slaughter. …
Michael Phillips, Chicago Tribune
…an anti-Captain America romp… In Gunn’s hands, the America superhero is grotesque, brutal and ridiculous. …a chaotic, freewheeling inversion of much of what’s expected in a comic book movie. Here, heroes die (a lot of them). …
Jake Coyle, Associated Press
…The violence is the most consistently inventive part of the whole package, though it grows tiresome in its thudding repetition. Like the story’s superficial finger-wagging at American wrongs, the brutality is both decorative and ritualistic. …
Manohla Dargis, The New York Times
…goofier and bloodier than the original… The script…herks and jerks along with a sort of forced-festive glee, its mounting body count buffeted by goofball banter and pounding soundtrack cues. A good half of the jokes don’t land… fully leans into midnight-movie camp. …[3/5]
Leah Greenblatt, Entertainment Weekly
…Hardcore fans will rejoice in telling us it is not for children. It’s not really for adults either.…
Donald Clarke, The Irish Times
…so much rapid-fire irreverence that it’s sometimes hard to figure out if it’s even supposed to be a movie… With its incessant profanity, ridiculous body count, and trollish sense of humor, Gunn’s film often seems content to exist in a constant state of rug-pulling. Lots of fun but little forward momentum. …
Bilge Ebiri, Vulture (New York Magazine)
…more violent and less lighthearted than his “Guardians” movies…
Pat Padua, The Washington Post