Aslan and the King of Kings—Disney’s “The Chronicles of Narnia: The Lion, the Witch and the Wardrobe” 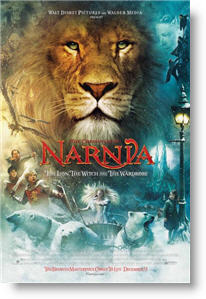 See our REVIEW of “The Chronicles of Narnia: The Lion, the Witch and the Wardrobe” (2005)

Director Andrew Adamson (“Shrek” and “Shrek 2”) and producer Mark Johnson were well informed about C.S. Lewis’s entire book series, The Chronicles of Narnia, including some of the Christian implications evident within them. As with the movie, the significance of Christianity was apparent during our interview, and the creators of this film were able to discuss some of their relevant thoughts and ideas. Firstly, I wondered what Adamson and Walt Disney Pictures discussed regarding the religious tone of this film, with an estimated budget of $150-million. Adamson reports:

Actually, I never even discussed it with Disney… To me it was something that was never an issue. I wanted to do a movie that was true to the book… the book has been interpreted by different people according to their own individual belief systems, and I think we’ve made a movie that’s the same. Basically, I like to say, “Whatever you got from the book, I do think you’ll get from the movie.”

Adamson did comment that in the beginning, he discussed the religious implications with Doug Gresham, stepson to C.S. Lewis. However, Adamson did not disclose what those conversations entailed.

Doug Gresham is the co-producer for this film, and he and his wife are described as committed Christians. Gresham did not attend our interview, but at a recent promotional event for this film, I had the opportunity to hear him speak and share a bit of his testimony revealing how he came to faith in Christ Jesus. Gresham and his wife operate an outreach specializing in counseling called Christian House Ministry. Gresham also works full time for the C.S. Lewis Company.

The subject of Christianity was also raised with producer Mark Johnson (“The Notebook,” “The Rookie,” “Avalon”, “Rain Man”). He explained that Disney did in fact hire a company to do a grass roots, faith-based campaign to promote this movie, however he says it only represents about five percent of their marketing budget. Most of the money they spent on marketing, he says, is aimed at getting young boys to come see the movie. But our discussion on marketing proved to be a stepping-stone to a chat about the spiritual content of the film. Johnson says:

…There have been all these questions about, “How Christian is the movie?” “How non-Christian is the movie?” “How faithful is it to the book?” There are a lot of people who this book means so much to, and I don’t want to take anything away from them—some of them Christian, some of them not. This book, for instance, is taught in a lot of Bible classes, and so it has real significance for a lot of American Christians, and yet C.S. Lewis himself said it was not a Christian book. But clearly, he was a Christian, and a Christian writer, and there’s a lot in there, but… I have to believe it’s a non-issue. And if you want to find all kinds of Christian symbolism in it, it’s certainly there, and if you don’t, you don’t. Most of us read it as kids and never in a thousand years thought it was anything more than a good kids’ story.

Making it more personal, I asked Johnson if he himself sees any Christian parallels in this story. He responded:

Do I? Yeah, I see where they are, if you want to read them in. I just see a really captivating story, sort of a classic story of good versus evil that embraces the values, the power of the family, compassion, and forgiveness.

Adamson, too, said that the sees as the inlaid messages:

I think it’s two things. I think there’s obviously the family story, and the story of family unity—and empowerment through unity. Then I think the other message that really comes through that was present in the book is that of forgiveness and sacrifice, which I think, again, is a universal message today, as much as it was 55 years ago.

Adamson also subtly tied these themes into what is happening in our world today:

I think you need a story like this any time. There are wars that have been going on for thousands of years, and often no one even remembers exactly why they started. And I just think there’s a huge place in the world for forgiveness, and we could quite easily move on from a lot of things that we’re stuck in.

Adamson explained how he and fellow New Zealander director Peter Jackson had worked together in the past on a film called “The Frighteners”, and how this connection was helpful to Adamson in making “Narnia”. Adamson sought out advice from Jackson concerning conversed adaptation, asking him how much he had changed “Lord of the Rings”. Jackson said he had to change more than he would think. But, he said, the trick is if people like it, then they don’t mind. If you make good choices, they don’t mind the changes. Adamson says, “…It was actually a kind of relief to hear, because I felt like keeping very, very close to the book.” 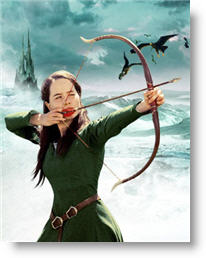 But there were some changes that Adamson made that were not easy to do. Johnson said that at first he anticipated problems working with C.S. Lewis’s family, but explained, “They so wanted the movie to work that they were really partners.” He followed that statement by saying that he didn’t mean that they agreed upon everything. For instance, Adamson faced a bit of contention updating the role the girls played in “Narnia”, taking them from sideline cheerleaders to actual participants in the battle. Adamson would not include C.S. Lewis’s line from the book where Father Christmas says, “It’s ugly when girls fight.” Adamson didn’t see that as a world in which we live in today, so the line was changed to, “Battles are ugly affairs.” 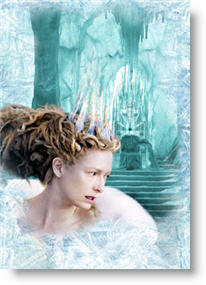 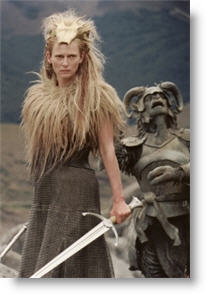 This film does have a battle scene or two as Aslan and the children fight against the White Witch, played by the brilliant actress Tilda Swinton. She was also in attendance for our interview, and shared some of her thoughts about the evil character she plays:

I wanted to shake up a kind of idea of a sort of dark evil. I thought this was the one to do it with, because apart from anything else she is the White Witch, and as such, she is the ultimate white supremacist. I thought it was time to shake up what I see as a rather dishonorable Hollywood tradition of giving us villains who look dark. And I also thought it would be particularly irresponsible, at this moment, for an American, globally-released picture to have a villain who looked either like a Jew or an Arab. So I thought that if anything, she should look Arian, because apart from being a fantasy film, it’s also a historical film; they’re second World War children, and their father’s away fighting fascism in Europe, and I thought that if anything, she should look Nazi, and I actually do throw a Nazi salute when I’m on the stone table.

[ Trivia: Michelle Pfeiffer was offered the role of the White Witch, but turned it down due to family obligations. She was the only major Hollywood star to have been contacted about the movie. (Source: Internet Movie Database) ]

Ultimately, this is a children’s story, and that is certainly sensed in either reading the book or seeing this movie. Adamson hit on something that was key to C.S. Lewis’s writing these stories.

There’s a lot of people that think he put everything in very deliberately. I think he wrote—certainly this first book—very much from his heart. And I think it was almost stream of consciousness. As you read it, you realize not everything is completely thought out. It’s more of an emotional story than an intellectual story.

Of course, questions about making movies from the six remaining stories from this book series were asked of Adamson. He initially said he was just trying to focus on finishing this one, but says that lately they have entertained ideas about producing future movies for the Chronicles of Narnia. He says that Prince Caspian would be the next one to make, since it involves all four kids. 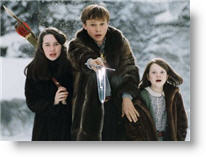 Johnson echoed some of those same thoughts, saying that if they didn’t do Prince Caspian next, they would never do it, since the kids would be too old (referring to the actors they used for this one). As far as permission goes, Johnson said they are free to make all movies from all seven of the books, but said it will depend on how this one does at the box office—and how it does critically.

Johnson’s is hoping to do a movie next called “Steinbeck’s Point of View” starring Denzel Washington—directed by Nick Cassavettes (“The Notebook”). Johnson describes the story as “…the spiritual salvation of a character, almost in the vein of “Field of Dreams”.”