for sex-related material and language 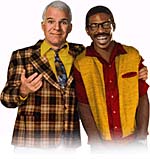 The tragedy of “Bowfinger” is that the premise could be very funny—everyone loves to see Hollywood making fun of itself. Unfortunately, it doesn’t deliver.

Bobby Bowfinger (Steve Martin) is a desperate producer and film director. He is eager to break into the “big-time” at any cost. Bowfinger uses his power of persuasion to make the Sci-Fi “Chubby Rain,” a script about aliens invading Earth in raindrops. He is able to hire everyone he needs to make the film except a star actor. So this misguided director plans to trick top-choice Kit Ramsey (Eddie Murphy) to be in “Chubby Rain” without his knowledge. What the audience knows and what Kit doesn't is from where most of the humor generates.

There is only one positive element in the entire film—teamwork. The crew has a lot of it, including allegiance to Bobby Bowfinger. But the film turns downward quickly and continues in that direction. One crew member, Daisy (from Ohio), uses sex to advance her acting career. She not only sleeps with most of the male crew, but a lesbian relationship is also implied. Alcohol is abused. Profanity is plenty. Bowfinger uses various forms of deception (fraud, blackmailing, lying, etc.) to get his way. Ethics and values are destroyed through the use of humor. It is interesting to note that C.S.Lewis once said “if Satan can get us to laugh at sin, then he can get us to accept sin.”

My advice is resist the temptation of Murphy and Martin’s comedic appeal and skip this one. Instead look to the more recommendable “Wizard of Speed and Time”.

I couldn’t agree more with the reviewer. This is the unfunniest film I have seen in ages. The premise is good and makes for an alluring trailer, but the film is dreadful. Save your money and give it to the poor—or even just burn it—rather than waste even a minute of your life on this trash. My Ratings: [3/1]

John Clayton, age 39
I’m not easily offended, so I found this movie to be a scream. Of all the comedies I’m seen this year, this one is better written, and delivers more laughs. The Mind-Head cult in the film appears to be a direct hit against many real-life psuedo religions and cults, and points out how illogical these groups can be. Steve Martin is a good writer, and this is Eddie Murphy’s best film since “The Nutty Professor.” However, those easily upset by politically incorrect humor should think twice before viewing this one. My Ratings: [1/4½]

Hillari Hunter, age 37
This movie was a waste of time. It was filled with profanity and innuendo's. This movie had a few funny parts but I would not recomend it. (don’t see this movie). My Ratings: [1½/2]

Aaron Arneson, age 14
This movie presented a feeling of depravity. The film must have been written overnight on a dare. Eddie Murphy, Steve Martin, and the other outcast of so-called comedians tried extremely too hard to make the audience laugh. I laughed once in the film, and the scene was so unrememberable that I couldn’t tell you at what scene it was! I can’t help but almost label this a “B” movie in its plot, yet also label it a waste of grand amounts of money in its production. What a waste! One of the worst parts of the movie was the young and gullible country girl evolving into the stereo-typical “Hollywood Flewsy” sleeping around with everybody to get here way in the making of the movie (“Bowfinger” being an actual film about people trying to make a movie on a small budget). Looks like this came true in the cinema I went to! My Ratings: [1/1]

James Lee Gordon “MacGordon”, age 23
“Bowfinger” is a very funny movie. With its hilarious stars Eddie Murphy and Steve Martin, a beautiful lead actress (Heather Graham), and a plot that’s witty and backstabbing to Hollywood, how can you lose? Well, as said, it IS very VERY funny. Murphy and Martin have unbeatable chemistry. But frequent sexual innuendo and humor, plus a few uses of profanity, prevent most preteens from seeing this one. But for teens and up, “Bowfinger” is a comic treat.

Gabe, age 15
…Kit is a race-baiting paranoid who is involved in something called Mind-Head (a parody of Scientology), presided over by Terrence Stamp, a rather weird “guru.” Bowfinger and his script are violently (I mean it) rejected by Kit. So, he decides to have Kit star in the movie without his knowledge by assembling his crew (Afrum, the theater star, and a semi-naive and downright slutty farm girl played by Heather Graham). Their attempts to create the movie without Kit’s knowledge, often assisted by the star’s nerdy look alike brother, are incredibly hilarious. You have to see it to believe it! On the morals standpoint, the characters of “Bowfinger” are not the greatest role models. Bowfinger himself sleeps with Graham and steals her credit card, then smuggles illegal immigrants into the country to be his film crew. He also nearly drives Kit insane with his “guerrilla film making” and blackmails him with footage of him flashing the Laker Girls (no nudity, thankfully). Heather Graham’s character sleeps around (no nudity or activity shown) to advance herself, including having sex with everyone on the film crew and a “Hollywood power lesbian.” The other characters, other than sleeping with Graham, are rather two-dimensional, with the exception of the neurotic theater star, who is hilarious. The bottom line: Although the characters are not good role models, the movie is appropriate for all over thirteen. There is no nudity, some profanity (one F-word, said really fast by Kit and others), and minimal, mostly comic, violence. This movie is one of the best comedies of this decade (I mean it)!

Plugged In, Focus on the Family