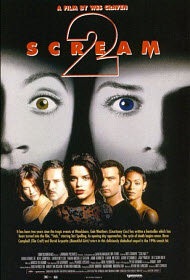 So many sibling movies suffer from the “sequel syndrome” when the second movie just doesn’t live up to the expectations created by the first. However, occasionally the stroke of brilliance is recreated in the sequel which matches or even surpasses the first. Such is the case with “Scream 2”.

Like its predecessor, “Scream”, the second installment of this Wes Craven franchise focuses on the life of Sydney Prescott (Neve Campbell), a survivor of the Woodsboro murders. It is two years after that harrowing experience and Sydney is trying to rebuild her life at college. However, this is hard to do when a movie, based on Gale Weather’s (Courteney Cox) book on the Woodsboro incident, is released. To make matters worse, two students are brutally murdered at the premier of the film and the infamous phone calls return. As the murders continue, Sydney must face her fears and fight the nightmare all over again.

“Scream 2” is as good, or even better, than the first as far as film quality is concerned. In the second film, we see the characters develop more so than in the first. Instead of simply being potential victims (not to mention suspects), we actually learn what Sydney, Gale, and Dewey (David Arquette) are made of. The story is also much more intriguing than the first and, as usual, the viewer is kept guessing until the end as to the true identity of the killer.

However, from a Christian standpoint, I cannot recommend this movie. The blood and gore goes against God’s command for us to keep our minds on pure things. As expected, the characters delve into the usage of profanity often. Although there is no sex or nudity (except for a short, risque scene), there are no redeeming morals or values contained in the two-hour blood fest. DO NOT take your children to see this film! Adults will have a hard enough time keeping their eyes on the screen; it will likely give children (and some adults) nightmares.

It is likely that “Scream” fans will be pleased with the second installment, while eveyone else will simply squirm through it. Unless you are looking to be scared, it is best that you go see a friendlier flick.

I was a HUGE fan of the first scream, and I really like gory movies. So my thoughts about Scream 2 are coming from a gore luving gal! I must admit, it deserves the title “slice and dice film” I thought the acting was fabulous and the plot was super. But its definatly not a children flick. I liked it and I think that it is abolutly an R rating deserved!!!

Katherine Berkley, age 19
The first Scream movie bad. This one is worse! 10 times worse!! Ok, how you say? The plot was OK, if they could have made something out of it without it being as cheesy as it was in the end. Man! I should have know it was going to be this bad. The first one wasn’t all that good, mainly because most parts were unrealistic. The second one was unrealistic as well, with some cheese thrown in. There were a lot of factors which contributed to the downfall of this movie. The cheesiness, unrealistic situations, how the killer just “happened” to get away, the cursing, the Secret police were horrible actors (most of the time they didn’t do thier job ie: just happening to walk off when in need) the movie lacked any thinking necissary whatsoever, I could have directed a better film and made a better plot, the ending was just complete trash, and most of all the number one reason why this movie was so horrible, the most contributing factor in this was… PEOPLE LIKED IT!!!…

Bill Ferguson
I was not a huge fan of the first Scream, but I found it entertaining enough to give the sequel a shot… I was hoping to find the same “let's-ridicule-the-genre-we’re-in while-using-the-same-techniques-we’re-making-fun-of” stylishness. Well, there was a bit of that in the middle, which I enjoyed. But the opening scene was so hokey that it didn’t set a good tone for the rest of the film. It wasn’t scary and it certainly wasn’t funny. Disappointingly, the end was even worse! It was like some Scooby-Doo wrapup and the killer (or killers), as far as I’m concerned, was completely unconvincing. I felt cheated by the screenwriter’s choice of who to make the villain(s). Upon seeing this ending, I highly doubt you’ll feel as satisfied as you did watching the original Scream, where the villains not only made sense, but were hilarious in their “dumb and dumber” explanation of their motives… aside from that, there’s some fun to be had in the middle (except for the fact that they kill my favorite character from both films, which is most unfair!). As a Christian, nothing you wouldn’t expect from this genre (violence, blood, etc.) and surprisingly free from much sexual imagery, although most of the characters aside from the central ones at the college are shown as living meaningless lives consisting mainly of dumb frat parties and empty brain-dead conversations. Hint: Don’t go see this mostly mediocre film if you have yet to see Titanic, a vastly superior film, more entertaining on all levels, and packed with emotional as well as visual punch! (not to mention a cool part near the end where a priest comforts passengers by reading a passage from Revelations) Keep living for Jesus, all…

Carl Adams Jr., age 25
Artistically, I found this film was almost as good as the original. Kevin Williamson’s script, like the first film, provides a good mystery and lots of suspense that will keep you guessing to the very end. But, it is a shame that this film actually has to show people being stabbed, shot, etc. in graphic detail. I long for the days of Hitchcock, who could serve up a taut, suspensful plot without all the graphic violence. Morally, this film is in the existentialist vein—life is life and if you die, well, tough, that’s it. This is not a feel good movie. I would recommend it only for adults, and only for those who are well-grounded morally and have a high tolerance for knifings and fake blood. Still, I found Scream 2 diverting and a nail-biter to the end. Just my humble opinion.

Kevin, Age 26
I thought I would enjoy this movie, as some of my friends said it was really good. But, when I saw the movie, Scream 2, it made me want to throw up. Of course, there is obviously a lot of blood and killing and hurting. But what really upset me was the portrayal of young people in this movie. There were numerous depictions of kids drinking and swearing and talking about things unclean in the eyes of God. All of us college kids do not act in such a purient and immoral way. This is disgusting!!

Dan Bennett
“…the stroke of brilliance is recreated in the sequel which matches or even surpasses the first.”[??] Personally, I don’t think it even comes close to being as good as the first movie. I found “Scream 2” to be predictable, and that the characters suffered from the “I am stupid and don’t realize the killer is behind me” syndrome. The movie seemed to focus more on gore than going for the scare like the original…

Psycho Boy, age 22
I felt excited going to the movie expecting what I saw the first time blood and guts. But I was shocked to find out that this movie actually had great acting and a really good script. It still had much gratuitous violence and still lacked feeling. Keep the kids home for this one it had a average amount of profanity and like I said a lot of blood and violence.

Jack Stevenson, age 18
“Scream 2” really wasn’t that great. If you want a bloodfest, you’re not going to get it. If you want another you’re-never-gonna-guess-whodunit kind of movie, you won’t be satisfied with its ending. It just wasn’t scary or fun. And weird thing was, you actually felt sorry for the people getting killed—unlike other “fun” horror movies. Something about this one, something about the characters made you feel bad, especially when Sarah Michelle Gellar “gets it.” I’m callous toward these movies, I know it’s wrong, but still, as a Christian, I just felt uneasy inside. It wasn’t fun at all. If you don’t know what I mean, you’ll understand when I say it was the same disappointment that I had with “Event Horizon.” It just wasn’t fun, it was distressing.