for strong violence, language and sexuality. 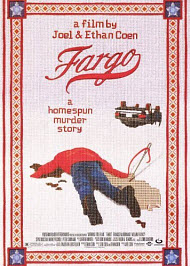 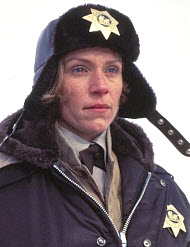 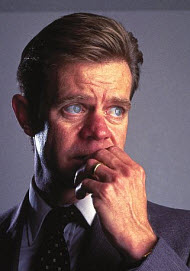 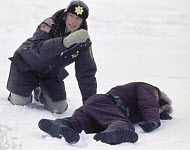 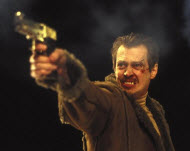 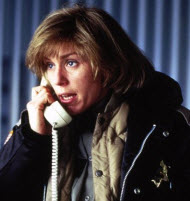 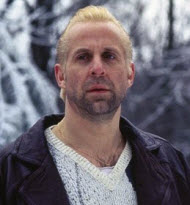 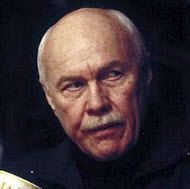 “A lot can happen in the middle of nowhere.”

The film “Fargo”, tells the tale of a car salesman, Jerry Lundegaard (played by William H. Macy of “E.R.”), who is married to the daughter of a wealthy businessman. Due to some shady financial dealings on his own part, Mr. Lundegaard conspires with a couple of two-bit hustlers to have his wife kidnapped. His plan is that his father-in-law will pay the ransom, which will then be split between himself and his accomplices. However, things go disasterously wrong, culminating in the deaths of a highway patrolman and two innocent bystanders.

Into this mess waddles Brainerd, Minnesota’s Chief-of-Police, Marge Gunderson, brilliantly played by Frances McDormand. Unflappable, very pregnant, and hysterically pragmatic, she goes about the business of solving this case. Marge, and her husband Norm, provide a stark contrast to the bleak specter of these crimes. They are a very real, warm, human center of basic goodness, staring unflinchingly into the face of cold, mindless, and ultimately stupid evil. But in digging her way into the sordid details of the case, Marge remains untouched. She provides a gentle, if somewhat shocked, moral standard in the midst of amoral chaos.

The film seeks to establish a disquieting correlation between life, humor, and brutality. It does this quite effectively, demonstrating the commonalities between all three. It should also be noted that nowhere in the film is the violence minimized or portrayed as cartoonish. This is as it should be. It is in the trivialization of violence that the viewer becomes desensitized to it.

A human resolution is accomplished in one of the last scenes in which Marge is questioning one of the culprits. Again, we see the contrast between good and evil. The criminal, who had contact with the victims, is all slack-jawed disinterest. Marge, who never knew those murdered, is near tears with pity and disbelief over what has been done to total strangers for “…a bit of money.” The final point of the film is made, however, when we realize that some measure of her pity is for the culprit.

Anyone contemplating the film should keep in mind that it contains numerous scenes of graphic violence and sexuality, and is littered with a multitude of profanities. While some of these scenes are offensive, they are, for the most part, intrinsic to the effectiveness of the story line.

This movie is one of my all-time favorites, if not number one on my list. I watched bits and pieces of it on TBS before finally renting and watching it in its entirety. I was amazed at how much it interested and entertained me. Everything right down to the soundtrack was near perfect, and I fell in love with Francis McDormand’s character in the movie. She definitely deserved that Oscar. Also, two of my favorite male actors, Steve Buscemi and William H. Macy, gave wonderful performances. The film really made me think, and I appreciated the morals demonstrated by Marge in the movie.

She and her husband provided a delightful contrast to the heartless villains who provided the movie’s violence. I was glad to be given a peek into the home of pregnant Marge and her husband. I felt akin to their lifestyle, and I rooted for Marge from the beginning. I was worried about her and the baby being hurt on the job, and I “awww-ed” at her husband’s offer to make her breakfast early in the morning. I also found myself feeling sympathetic towards Macy, who arranges for his own wife to be kidnapped.

He did a great job of appearing flustered and hopeless. I love this movie, because we really get to know the characters and develop feelings towards them. This rarely happens for me in a movie. If you are going to see this movie, be prepared for violence and some sexuality, none gratuitous, but violent and sexual nonetheless. Also be prepared for a great movie. I was moved and amazed at this wonderful film. My Ratings: [Extremely Offensive / 4½]

Lauren, age 16
This was one of the weirdest movies I’ve ever seen, I must say! I laughed constantly over the characters’ accents, tendencies, and personalities, and yet the scenes of violence, obscenities, and sex were a stark contrast that contributed to the movie’s weirdness. PLEASE NOTE: there are two scenes (weaved unexpectedly/without warning into the course of the plot) of characters having sex with prostitutes, and there is prolific use of the “F” word (among others). This is not a movie for young viewers, folks. I have yet to decide whether I liked the movie or not—strange is a word I would use to describe this movie. …