for sex-related humor and language 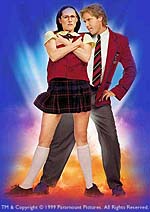 If you can only imagine a film that makes fun of God, Christianity, values, and sex, then you really do not have to see “Superstar”. This film is as irreverent as any Monty Python rendering. Yet another Saturday Night Live spin-off bites the dust. This time they bring to the big screen the Molly Shannon Catholic schoolgirl character Mary Katherine Gallagher. The best part of the film was that only 13 people showed up to see this film in our area on opening day. I truly hope that is a national trend.

“Superstar” is the story of an unlikely armpit-sniffing girl who dreams of one day kissing the star football player. She decides to enter a talent contest for Venereal Disease. The winner gets to be an extra in a film with “good moral values.” The film goes downhill from there.

Mary prays often to God and Jesus to grant her sexual attraction. A “dream-like” Jesus does appear and claims to be a product of REM sleep. This “new age” Jesus vision is cast member Will Ferrel, who is also her fantasy boyfriend.

The film pokes fun at Christianity and the Catholic Church.

There is minimal language, but a grandmother does use the f-word. There is an abundance of sexual innuendo. References are made to various fetishes and homosexuality. Mary declares “that God works in mysterious ways.” However, He certainly was not consulted in this offensive film. There is also a warped view of Heaven and eternity. The only brief positive note is that Mary prays asking forgiveness for her selfishness toward the conclusion of the story.

“Superstar” cannot be recommended. In fact, this loser gets my vote for one of the years worst films.

Although highly irreverent, I found this movie highly entertaining. It gives one a chance to step back and take a look at how hypocritically one can live life. As a Catholic Christian born and raised, I believe that it is possible to stop looking for the offensive and laugh where it’s funny. Sure, if you are searching for a movie that is full of virtue, is completely unoffensive yet funny, this would not be the movie. If you are looking for a good time, watch this hilarious movie and bring a friend. My Ratings: [3½/4]

Ruth Cook, age 19
Don’t see this movie, unless you want to waste your money. Honestly, it isn’t even worth the money to go out and rent it when it comes out on video. The entire movie seemed to endlessly bash good morals and make fun of God. I couldn’t believe my eyes. However, I really shouldn’t be suprised… Hollywood is just reflecting our society… My Ratings: [1/1½]

Anon., age 19
I feel that God was brought up in a positive way in a movie that did not have to show God even at all. There are many occasions that show God in a positive outlook. I feel that this movie will be an excellent way of ministering to a population of people who find SNL funny and who may be unbelievers. My Ratings: [3½/2]

Jada Nobis, age 21
I dislike movies that make fun of something they don’t understand. Superstar takes Catholicism and parodies the surface stereotypes. But, just as misleading as this movie is your information on Catholicism. I was most disturbed by your information on infallibility. The pope does not have any power to nullify Scripture through papal decree. Do some homework.