The Story of Us

for language and brief sexuality. 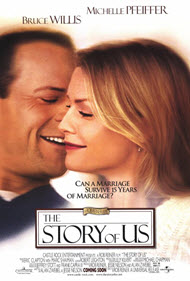 Is formalized marriage becoming obsolete? Answer (Some people are convinced that traditional marriages don’t work and that this practice should be abandoned. What does the Bible say about marriage?)

“Can a marriage survive 15 years of marriage?”

“The Story Of Us” intensely portrays the pain of a marriage falling apart. This is a movie which delves into the line we’ve all heard: “We just didn’t love each other anymore.” Yet, “The Story Of Us” is also refreshingly based on a married couple not willing to throw that first love away.

I think “The Story Of Us” was poorly advertised to the point of misrepresentation. It is NOT a romantic comedy at all, but is instead a deeply moving drama. Despite lighthearted moments, this movie is intense from beginning to end. The couple portrayed by Bruce Willis and Michelle Pfeiffer have many personality differences, and have grown apart over the years under the strain of their disagreements and the pressures of life.

Their discord has grown increasingly heated to the point of ongoing lashing verbal clashes. They wrestle with the conflict of their current relational tension versus the ardor of a love they once knew together. They attempt again and again to rekindle the flame only to repeatedly reignite the fire. Either they will break the cycle or they will be broken by it.

I thought the acting was excellent. The emotional intensity of this couple is touching. I felt like these people mattered. The camera work and script are intelligent. This movie is well made. One powerful scene of Michelle Pfeiffer having flashbacks of her marriage is enough to bring both men and women to tears.

From a Christian point of view, “The Story Of Us” is not offense-free. Lewd sexual remarks by minor characters in the film are a definite earsore. The heated arguments between the couple are full of swearing. However, couples lashing out at one another don’t often communicate with tender words in the first place. Heated romance is displayed, but this is a married couple, so the interaction is apt.

I suppose if all Christians were perfect with perfect relationships, this movie would have no use. As it is, “The Story Of Us” hits home with the brokenness most of us likely face, at least from time to time. The overall morals are solid. These people could seek out affairs and addictions to cope, but they don’t. They could abandon their family and escape, but they don’t walk away. They could punish one other in the hurtful ways only those closest to you could, but they don’t steep this low. “The Story of Us” demonstrates the perseverance of a couple to rediscover the love they once had, taking the hard road and not the easy one

It may hit too close to home for some; others might not key in on the psychology and find it no more than a fight-filled drama. Beneath the surface of this well-produced film is a glimpse of the relational stress most of us will not completely escape, Christian or not—and a strong encouragement to persevere towards a godly ending.

Positive
Positive—For once, a movie where the marriage stays together! Despite what you may have heard, this movie is NOT about divorce, it is about why you SHOULD stay together. The final scene in this movie sums up everything. I give this movie 4 stars!
My Ratings: Moral rating: 3 / Moviemaking quality: 2

Dianne, age 23 (USA)
Positive—I think the movie had a good message behind all the rotten language. The message is that a marriage is worth working on, and that you won’t always feel the same “love” that you had in the beginning. I could relate to the dinners out with nothing to say to one another and thinking that you have nothing in common. But I could also relate to the deep down feeling that saving the marriage is the most important thing.
My Ratings: Moral rating: 2 / Moviemaking quality: 3

Judy, age 36 (USA)
Neutral
Neutral—My husband and I both enjoyed this movie, though we were uncomfortable with the heavy language, sexual talk and use of the Lord’s name in vain. The movie portrays what is happening in our world today—separation and divorce; especially poignant is the way this affects the children. The parents keep this a secret as long as they can, but the daughter senses something is up. This movie was almost like therapy for my husband and I because it made us realize even more how we need to appreciate each other and show our love continually, for better or worse. I think that anyone who has been married for several years (we are in our 9th year) has felt some of the same feelings that this couple shared.

Be cautioned as to the language and blatant sexual conversations that their friends have. Some of the guys talk about cheating on their wives, fantasizing, etc., but Bruce Willis’ character doesn’t buy into that—he wants to remain true to his wife.

I highly recommend the last 15 minutes of the movie. If you can filter out the other negatives, I think this movie could actually encourage married couples to strive harder to make their marriages lasting and of great quality.
My Ratings: Moral rating: 2 / Moviemaking quality: 3

Cindy LaReau, age 29 (USA)
Negative
Negative—It’s nice to have an ending that promotes marriage rather than divorce. However, the film didn’t build to this ending. The couple decides to stay together after Michelle Pfeiffer delivers a brilliant speech and than BOOM the marriage is saved. That is so far removed from real life that it sinks the whole picture. This film also has trouble walking the balance between comical and serious. The serious scenes for the most part are very telling, but they are interrupted by sitcomish scenes whenever Pfeiffer and Willis get together with their friends. Rita Wilson is terrible and says some of the most terrible and vulgar things.

It is interesting to note that she is Tom Hanks’ wife. She should have asked him to use his influence to get some better dialog. As for Willis’ friends, Paul Reiser seems to be doing his AT&T commercial, and Rob Reiner seems to doing a dumbed-down version of Mike Stivic from “All in The Family.” The only thing that distinguishes these scenes from sitcoms is the relentless vulgar expressions and profanities which are responsible for the film’s R rating.
My Ratings: Moral rating: 2 / Moviemaking quality: 2½

Andrew, age 23 (USA)
Negative—Don’t waste your time or money on this movie. I went, expecting a romantic story of a loving, yet imperfect marriage. Instead, I got nearly 2 hours of 2 actors yelling lines at each other for reasons the audience can’t quite figure out.

I have lost all respect for the supporting actors (Rob Reiner, Paul Reiser, and Rita Wilson) because of their willingness to say such lines, and for Michelle Pfeiffer for a brief sex scene in which she repeatedly uses the “f” word. I am ashamed to have seen this movie. Save yourself the shame and go to dinner with your spouse instead.
My Ratings: Moral rating: 1 / Moviemaking quality: 1

Angela, age 33 (USA)
Comments from young people
Negative—I thought this was going to be a nice, romantic comedy, like the previews advertised. While the rest of the audience found some things amusing, I did not! The main characters are contemplating a divorce, without having a real reason, other than they can’t get along very well. It is evident that they still love each other. (I would give examples, but in case anyone still want to go see this, I won’t.) There is no real reason for them to get a divorce! There was no abuse, no unfaithfulness. But, unfortunately, in this day and age, anything can and will be used as an excuse. I spent most of the movie in tears since my parents are going through a similar scenario. The only exception, is that they have an excuse to get divorced. (See above reasons.) I do not recommend this movie at all.