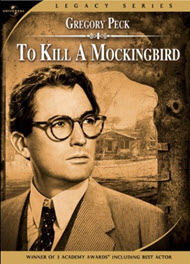 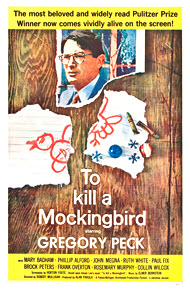 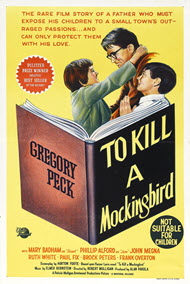 This B&W period piece (deep-south U.S., 1930s) is generally considered one of the most unforgettable films ever made, and I agree.

Atticus Finch (Gregory Peck), an honest, widowed small-town lawyer, is called on to defend Tom Robinson (Brock Peters), a black man accused of raping a white woman. The film is basically seen through the eyes of Finch’s children, Scout (Mary Badham) and Jem (Philip Alford), and is voice-over narrated by Scout as a grown woman recalling the way things used to be.

Although the trial and its surrounding events are the centerpiece, the film’s other primary focus is the children’s adventures; these include swapping tall stories about a reclusive retarded man, Arthur “Boo” Radley (screen debut of Robert Duvall), and egging each other on to invade the Radley premises and catch a glimpse of Boo. Of course, they’re being thoughtless and mean, but they don’t realize that; they’re just doing what kids do. At the end, the two storylines converge in an unexpected way.

This film was made by the “old” Hollywood standards; it doesn’t have the profane language and explicit violence that are standard content today. Even in a killing scene, it uses an indirect method of showing the action. Atticus is a very positive role model. The children do a lot of growing up during the course of the film. Their insensitive behavior toward the Radleys, and the racist attitudes of most of the white community, are clearly shown as wrong.

Remember, though, that children are not just little adults. A preadolescent child who is still in the latency period (has no interest in the subject of sex) should not be exposed to an emotional courtroom drama about rape. There’s also an all-white jury which is willing to convict a black man even though his lawyer, Atticus, has shown reasonable proof that the crime never even occurred; and a hate-filled man who wants to get even with Atticus by attacking his children. As a parent, you’re the best judge of when your own children are ready for this kind of material—so use your best judgment.

Were all of America’s Founding Fathers racists? Answer

This is absolutely one of the BEST movies I have ever seen! Gregory Peck is powerful as Atticus. (He won the ’62 Oscar for best actor). There are some scenes that may be a bit scary to younger kids, but other than that, there in nothing wrong with it. No profanity, sex or any others that are popular in today’s films. However, is takes place during the Depression and racisim is present as the reviewer said. So there are some speculation against Atticus for defending a black man. But other than that, it’s great. You must see this incredible film. My Ratings: [5/5]

Christopher, age 17
They left out a lot of parts from the book. I find the book more interesting than the movie. If you want to get the full story you should read the book. My Ratings: [3½/3]