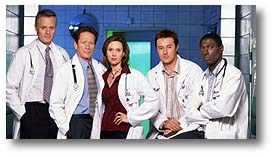 Show Synopsis: (from the producer) "Body & Soul" takes place at Columbus, Ohio's Century Hospital, where Western and alternative medicine, as well as the reverent and irreverent, coexist. Dr. Rachel Griffen (Laskin) has recently returned from a two-year fellowship in the Far East. Her eyes have been opened to "alternative medicine," combining alternative therapies and treatments with the traditional practices of Western medicine. Dr. Isaac Braun (Strauss), chief of surgery and ironically Dr. Griffen's former mentor, has no belief in or tolerance for alternative practices. Dr. Braun's belief in science-based, Western medicine is absolute.

viewer comments…
Usually Okay—I'm amazed that the "feel good network" would cancel a show after airing ONLY 4 episodes! It is clear that the ratings had very little to do with this decision! I think they (Body & Soul) could have done it with a few cast changes (actually the male cast was fantastic…new faces, diverse-great!) and a more central location for their characters to hang out (kinda like MASH using the O.R. and the SWAMP). But these things take time and for some reason PAX did not allow them this valuable time. My PhD is in clinical psychology and I work as a health psychologist in a medicine unit (you can see one of the MANY reasons I liked Body & Soul). Although I know very little about writing for TV etc… I'd love a chance to revive Body & Soul! I'm, not sure how open PAX is to hearning me…I'm both Jewish AND my father is a Rabbi… but acknowledging a connection between mind and body is critical to understanding and appreciating how God created us and what he hopes for us. I hope Pax takes a second look at this shows spiritual potentional. I guess I have seen all 4 shows, the pilot, the episode about Dr. Braun's partner, the story about the child with the allergy to nuts, and the last one with the vet who ate pencil fragments (I thought that one was great!).
Dr. Julie Meisels, age 33
Usually Okay—I give Body & Soul a "Very Okay" rating. This show is thoughtful, funny, and reminds us that no one is perfect—we are all human and we should learn to laugh a little more. Having experienced my own body's healing with our good Lord's "other medicines" I am grateful to see that PAX is helping to remind others of this in a light hearted manner.
Kathryn-Marie, age 73
Avoid—This show is just a bunch of New Age trash. I could not stomach much of it.
Roger CXhaney, age 50
Usually Okay—I love this show! I believe we as Christians must remain open minded. For every sickness, God has provided us with a natural cure. I think a balance of conventional and alternative or holistic medicine is the way of the future. Body and Soul is a wonderful show with a very talented cast.
Silver, age 38
Usually Okay—I liked Body and Soul. I thought it was a good mix of comedy and drama. I just can't get all upset about the alternative medicine issue. This is a TV show, not a fact based documentary. For those who don't like it, don't watch it.
Mary, age 30