a king of Israel 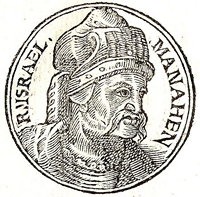 He is a son of Gadi, and successor of Shallum, king of Israel, who he killed. His reign was one of cruelty and oppression (2 Kings 15:14-22).

During his reign, King Pul of Assyria came with a powerful force against Israel, but was induced to withdraw by a gift from Menahem of 1,000 talents of silver.