What is a…
fiery serpent 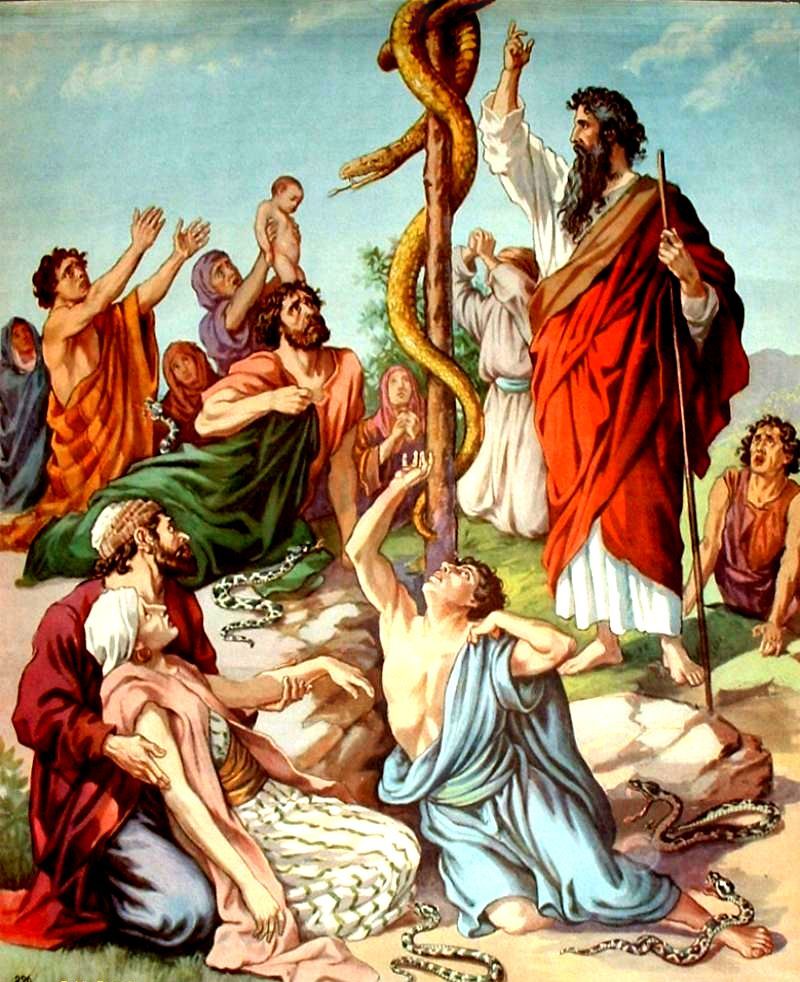 Bronze Serpent painting by Otto Semier based on engravings by Carolsfeld

The King James Version refers to a “fiery” serpent in Numbers 21:8, “And the LORD said unto Moses, Make thee a fiery serpent, and set it upon a pole: and it shall come to pass, that every one that is bitten, when he looketh upon it, shall live.” Here, “fiery” refers figuratively to the burning pain inflicted by a poisonous serpent.

The Septuagint says “deadly,” instead of “fiery.” The Vulgate says “burning.”

“The serpent was probably the naja haje of Egypt, or some other swift-springing, deadly snake (Isaiah 14:29).

After setting out from their encampment at Ezion-gaber, the Israelites entered on a wide sandy desert, which stretches from the mountains of Edom as far as the Persian Gulf. While traversing this region, the people began to murmur and utter loud complaints against Moses. As a punishment, the Lord sent serpents among them, and much people of Israel died. Moses interceded on their behalf, and by divine direction he made a brazen serpent, and raised it on a pole in the midst of the camp, and all the wounded Israelites who looked on it were at once healed. (Compare John 3:14,15.) (See ASP) (Mathew G. Easton, Easton’s Bible Dictionary) 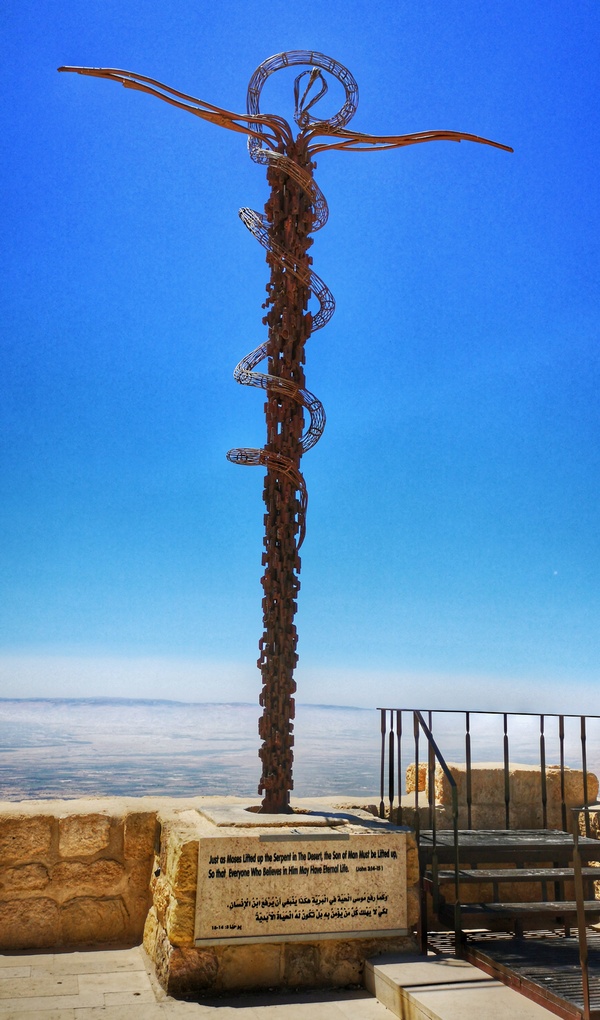 Modern monument commemorating the bronze serpent made and erected by Moses. This stands on Mount Nebo in Israel in front of the church of Saint Moses. The inscription reads: “Just as Moses lifed up the serpent in the desert, the Son of Man must be lifted up, so that everyone who believes in Him may have eternal life” (John 3:14-15).
Photo: John Romano D'Orazio. License: CC BY 4.0.

The “bronze serpent” made by Moses was preserved by the Israelites till the days of Hezekiah, when it was destroyed (2 Kings 18:4).

A “fiery flying” serpent is referred to in Isaiah 14:29, “…for out of the serpent's root, shall come forth a cockatrice, and his fruit shall be a fiery flying serpent” (KJV). Isaiah 30:6 says, “The burden of the beasts of the south: into the land of trouble and anguish, from whence come… the viper and fiery flying serpent…” (KJV).

Albert Barnes, Notes on the Bible, states his opinion that…

“This is the flying serpent so often referred to in the Scriptures. It is known to have abounded in the Arabian deserts, and was doubtless found also in Egypt as being in the same latitude, and infested with similar reptiles. Niebuhr thus describes a species of serpent which answers to this account.”

There is at Bakra a sort of serpents which they call Heie Sursurie, or Heie Thiare. They commonly keep upon the date trees; and as it would be laborious for them to come down from a very high tree in order to ascend another, they twist themselves by the tail to a branch of the former, which, making a spring, by the motion they give it, throw themselves to the second. Hence, it is that the modern Arabs call them the flying serpents—Heie Thiare.'”

Lord Anson, as quoted by Niebuhr, also speaks of them as follows:

The Spaniards informed us that there was often found in the woods a most mischievous serpent, called the flying snake, which, they said, darted itself from the boughs of trees on either man or beast that came within its reach, and whose sting they took to be inevitable death. There was a species of serpent which the Greeks called Acontias, and the Roman Jaculus, from their swift darting motion, and perhaps the same species is here referred to which Lucan calls Jaculique volucres. That these venomous reptiles abounded in Egypt is expressly testified by profane writers. Thus Ammianus says (xxii. 15), that Egypt nourishes innumerable serpents, basilisks, and twoheaded serpents (amphisbaenas), and the seytalus (a serpent of a glistening color), and the (Latin: Jaculus), and adders, and vipers, and many others.

John Gill's Exposition of the Entire Bible states that…

“The ‘serpent’ …“fiery”, or ‘burning,’ because it inflames where it bites; of which see Number 21:6 and ‘flying,’ not because it has wings, though some serpents are said to have them; but because, when it leaps or darts upon a man, it is with such swiftness, that it seems to fly; the serpent called “acontias”, or “serpens jaculus”, is here alluded to.”