How did land plants survive the Genesis Flood? 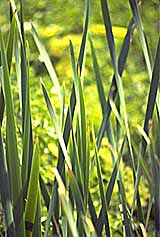 Many terrestrial seeds can survive long periods of soaking in various concentrations of salt water.[1] Indeed, salt water impedes the germination of some species so that the seed lasts better in salt water than fresh water.

Other plants could have survived in floating vegetation masses, or on pumice from the volcanic activity. Pieces of many plants are still capable of asexual sprouting.

Many plants could have survived as planned food stores on the ark, or accidental inclusions in such food stores (Genesis 6:21).

Many seeds have devices for attaching themselves to animals, and some could have survived the flood by this means. Others could have survived in the stomachs of the bloated, floating carcasses of dead herbivores. The olive leaf brought back to Noah by the dove (Genesis 8:11) shows that plants were regenerating well before Noah and company left the ark.

There are many simple, plausible explanations for how plants could have survived the flood. There is no reason to doubt the reality of the flood as described in the Bible.