How Did Fish Survive the Flood? 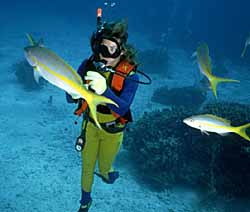 If the whole Earth were covered by water in the flood, then there would have been a mixing of fresh and salt waters. Many of today's fish species are specialized and do not survive in water of radically different saltiness to their usual habitat. So how did they survive the flood?

Note that the Bible tells us that only land-dwelling, air-breathing animals and birds were taken on the ark (Genesis 7:14-15, 21-23).

We do not know how salty the sea was before the flood. The flood was initiated by the breaking up of the “fountains of the great deep” (Genesis 7:11). Whatever the “fountains of the great deep” were (see Noah's Flood—What did all the water come from?), the flood must have been associated with massive earth movements, because of the weight of the water alone, which would have resulted in great volcanic activity.

Volcanoes emit huge amounts of steam, and underwater lava creates hot water/steam, which dissolves minerals, adding salt to the water. Furthermore, erosion accompanying the movement of water off the continents after the flood would have added salt to the oceans. In other words, we would expect the pre-flood ocean waters to be less salty than they were after the flood. 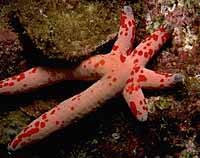 Many of today's marine organisms, especially estuarine and tidepool species, are able to survive large changes in salinity. For example, starfish will tolerate as low as 16-18 percent of the normal concentration of seawater.

There is also evidence of post-flood specialization within a kind of fish. For example, the Atlantic sturgeon is a migratory salt/freshwater species but the Siberian sturgeon (a different species of the same kind) lives only in fresh water.

Many families[1] of fish contain both fresh and saltwater species. These include the families of toadfish, garpike, bowfin, sturgeon, herring/anchovy, salmon/trout/pike, catfish, clingfish, stickleback, scorpionfish, and flatfish. Indeed, most of the families alive today have both fresh and saltwater representatives. This suggests that the ability to tolerate large changes in salinity was present in most fish at the time of the flood. Specialization, through natural selection, may have resulted in the loss of this ability in many species since then.

Hybrids of wild trout (fresh water) and farmed salmon (migratory species) have been discovered in Scotland,[2] suggesting that the differences between freshwater and marine types may be quite minor. Indeed, the differences in physiology seem to be largely differences in degree rather than kind.

Major public aquariums use the ability of fish to adapt to water of different salinity from their normal habitat to exhibit freshwater and saltwater species together. The fish can adapt if the salinity is changed slowly enough.

So, many fish species today have the capacity to adapt to both fresh and salt water within their own lifetimes.

Aquatic air-breathing mammals such as whales and dolphins would have been better placed than many fish to survive the flood because of the turbidity of the water, changes in temperature, etc. The fossil record testifies to the massive destruction of marine life, with marine creatures accounting for 95 percent of the fossil record.[3] Some, such as trilobites and ichthyosaurs, probably became extinct at that time. This is consistent with the Bible account of the flood beginning with the breaking up of the “fountains of the great deep” (i.e., beginning in the sea; “the great deep” means the oceans).

There is also a possibility that stable fresh and saltwater layers developed and persisted in some parts of the ocean. Fresh water can sit on top of salt water for extended periods of time. Turbulence may have been sufficiently low at high latitudes for such layering to persist and allow the survival of both freshwater and saltwater species in those areas.

There are many simple, plausible explanations for how fresh and saltwater fish could have survived the flood. There is no reason to doubt the reality of the flood as described in the Bible.