Noah’s Flood—Where did the water come from?

In telling us about the world-changing Flood in the days of Noah, the Bible gives us much information about where the waters came from and where they went. The sources of the water are given in Genesis 7:11 as “the fountains of the great deep” and the “windows of heaven.”

The Fountains of the Great Deep

The “fountains of the great deep” are mentioned before the “windows of heaven,” indicating either relative importance or the order of events.

So, the “fountains of the great deep” are probably oceanic or possibly subterranean sources of water. In the context of the flood account, it could mean both.

“Fountains of the great deep” scene from The World That Perished

If the fountains of the great deep were the major source of the waters, then they must have been a huge source of water. Some have suggested that when God made the dry land appear from under the waters on the third day of creation, some of the water that covered the earth became trapped underneath and within the dry land.[2]

Genesis 7:11 says that on the day the flood began, there was a “breaking up” of the fountains, which implies a release of the water, possibly through large fissures in the ground or in the sea floor. The waters that had been held back burst forth with catastrophic consequences.

There are many volcanic rocks interspersed between the fossil layers in the rock record—layers that were obviously deposited during Noah's flood. So it is quite plausible that these fountains of the great deep involved a series of volcanic eruptions with prodigious amounts of water bursting up through the ground. It is interesting that up to 70 percent or more of what comes out of volcanoes today is water, often in the form of steam.

In their catastrophic plate tectonics model for the flood, Austin et al. have proposed that at the onset of the flood, the ocean floor rapidly lifted up to 6,500 feet (2,000 meters) due to an increase in temperature as horizontal movement of the tectonic plates accelerated.[3] This would spill the seawater onto the land and cause massive flooding—perhaps what is aptly described as the breaking up of the “fountains of the great deep.”

The windows of heaven

During the Flood, the world was deluged in 40 days of rain. But this was not the major source of the Flood waters. (Scene from the award-winning Christian video, The World that Perished.)

The other source of the waters for Noah's flood was “the windows of heaven.” Genesis 7:12 says that it rained for 40 days and 40 nights continuously.

Some have argued that God's use of the rainbow as the sign of His covenant with Noah (Genesis 9:12-17) suggests that there were no rainbows, and therefore no clouds or rain, before the flood. However, if rainbows (and clouds) existed before the flood, this would not be the only time God used an existing thing as a special “new” sign of a covenant (e.g., bread and wine in the Lord's Supper).

It is difficult to envisage a pre-flood water cycle without clouds and rain, as the sun's heat, even in that era, must have evaporated large volumes of surface waters which would have to eventually condense back into liquid water. And droplets of liquid water form clouds from which we get rain.

The expression “windows of heaven” is used twice in reference to the flood (Genesis 7:11, 8:2). It is used only three times elsewhere in the Old Testament: twice in 2 Kings 7:2 and 19, referring to God's miraculous intervention in sending rain, and once in Malachi 3:10, where the phrase is used again of God intervening to pour out abundant blessings on his people. Clearly, in Genesis the expression suggests the extraordinary nature of the rainfall attending the flood. It is not a term applied to ordinary rainfall.

What about “the waters above”?

We are told in Genesis 1:6-8 that on the second day of creation God divided the waters that were on the Earth from the waters that He placed above the Earth when He made a “firmament” (Hebrew: raqiya, meaning “expanse”) between those waters.[5] Many have concluded that this “expanse” was the atmosphere, because God placed the birds in the expanse, suggesting that the expanse includes the atmosphere where the birds fly. This would put these waters above the atmosphere.

However, Genesis 1:20, speaking of the creation of the birds, says (literally) “let the birds fly above the ground across the face of the expanse of the heavens.”[6] This at least allows that “the expanse” may include the space beyond the atmosphere.

Dr. Russell Humphreys has argued that since Genesis 1:17 tells us that God put the sun, moon, and stars also “in the expanse of the heaven” then the expanse must at least include interstellar space, and thus the waters above the expanse of Genesis 1:7 would be beyond the stars at the edge of the universe.[7]

However, prepositions (in, under, above, etc.) are somewhat flexible in Hebrew, as well as English. A submarine can be spoken of as both under and in the sea. Likewise, the waters could be above the expanse and in the expanse, so we should be careful no to draw too much from these expressions.

So what were these “waters above”? Some have said that they are simply the clouds. Others thought of them as a “water vapor canopy,” implying a blanket of water vapor surrounding the Earth. 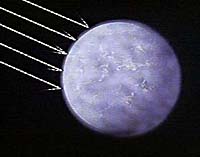 Was there an ancient vapor canopy around the Earth that shielded pre-Flood inhabitants from harmful radiation that causes everything from skin cancer, mutations, and more? Illustration from The World that Perished video.

Dr. Joseph Dillow did much research into the idea of a blanket of water vapor surrounding the Earth before the flood.[8] In a modification of the canopy theory, Dr. Larry Vardiman suggested that much of the “waters above” could have been stored in small ice particles distributed in equatorial rings around the Earth similar to those around Venus.[9]

The Genesis 7:11 reference to the windows of heaven being opened has been interpreted as the collapse of such a water vapor canopy, which somehow became unstable and fell as rain. Volcanic eruptions associated with the breaking up of the fountains of the great deep could have thrown dust into the water vapor canopy, causing the water vapor to nucleate on the dust particles and make rain.

Dillow, Vardiman, and others have suggested that the vapor canopy caused a greenhouse effect before the Flood with a pleasant sub tropical-to-temperate climate all around the globe, even at the poles where today there is ice. This would have caused the growth of lush vegetation on the land all around the globe. The discovery of coal seams in Antarctica containing vegetation that is not now found growing at the poles, but which obviously grew under warmer conditions, was taken as support for these ideas.[10]

A vapor canopy would also affect the global wind systems. Also, the mountains were almost certainly not as high before the flood as they are today, as we shall see. In today's world, the major winds and high mountain ranges are a very important part of the water cycle that brings rain to the continents. Before the flood, however, these factors would have caused the weather systems to be different.

Those interested in studying this further should consult Dillow's and Vardiman's works.

A major problem with the canopy theory

Vardiman[11] recognized a major difficulty with the canopy theory. The best canopy model still gives an intolerably high temperature at the surface of the Earth.

Rush and Vardiman have attempted a solution,[12] but found that they had to drastically reduce the amount of water vapor in the canopy from a rain equivalent of 40 feet (12 meters) to only 20 inches (.5 meters). Further modeling suggested that a maximum of 2 meters (6.5 feet) of water could be held in such a canopy, even if all relevant factors were adjusted to the best possible values to maximize the amount of water stored.[13] Such a reduced canopy would not significantly contribute to the 40 days and nights of rain at the beginning of the flood.

Many creation-scientists are now either abandoning the water vapor canopy model[14] or no longer see any need for such a concept, particularly if other reasonable mechanisms could have supplied the rain.[15] In the catastrophic plate tectonics model for the flood,[16] volcanic activity associated with the breaking up of the pre-flood ocean floor would have created a linear geyser (like a wall) of superheated steam from the ocean, causing intense global rain.

Nevertheless, whatever the source or mechanism, the scriptural statement about the windows of heaven opening is an apt description of global torrential rain.

A vapor canopy holding more than 7 feet (two meters) of rain would cause the Earth's surface to be intolerably hot, so a vapor canopy could not have been a significant source of the flood waters.