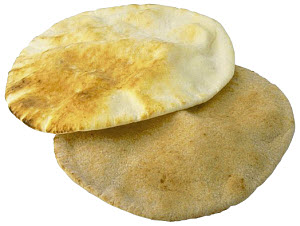 bread in the Bible

Among the Jews, bread was generally made of wheat (Exodus 29:2; Judges 6:19), though also sometimes of other grains (Genesis 14:18; Judges 7:13). Parched grain was sometimes used for food without any other preparation (Ruth 2:14).

Bread was prepared by kneading in wooden bowls or “kneading troughs” (Genesis 18:6; Exodus 12:34; Jeremiah 7:18). The dough was mixed with leaven and made into thin cakes, round or oval, and then baked.

In the towns there were public ovens, which were much made use of for baking bread; there were also bakers by trade (Hos. 7:4; Jeremiah 37:21). Their ovens were not unlike those of modern times. But sometimes the bread was baked by being placed on the ground that had been heated by a fire, and by covering it with the embers (1 Kings 19:6). This was probably the mode in which Sarah prepared bread on the occasion referred to in Genesis 18:6.

In Leviticus 2 there is an account of the different kinds of bread and cakes used by the Jews. (See BAKE.)

God commanded His prophet Ezekiel to make and eat a type of bread consisting of various specified seeds.

“But as for you, take
wheat,
barley,
beans,
lentils,
millet, and
spelt,
and put them in one vessel and make them into bread for yourself; you shall eat it according to the number of the days that you lie on your side, 390 days.” —Ezekiel 4:9 NASB

The shew-bread consisted of twelve loaves of unleavened bread prepared and presented hot on the golden table every Sabbath. They were square or oblong, and represented the twelve tribes of Israel. The old loaves were removed every Sabbath, and were to be eaten only by the priests in the court of the sanctuary (Exodus 25:30; Leviticus 24:8; 1 Samuel 21:1-6; Matthew 12:4).

The word bread is used figuratively in such expressions as “bread of sorrows” (Psalm 127:2), “bread of tears” (80:5), i.e., sorrow and tears are like one’s daily bread, they form so great a part in life. The bread of “wickedness” (Proverbs 4:17) and “of deceit” (20:17) denote in like manner that wickedness and deceit are a part of the daily life.