Are dinosaur fossils evidence for the great Flood?

See this page in: Portuguese, Spanish 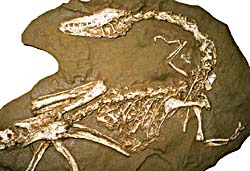 Such a great event as Noah's Flood would surely have left evidence to be found today. For instance, one would expect to find billions of dead creatures buried by water in mud and sand (now hardened to rock). And that is exactly what scientists do find around the world.

Thousands of dinosaur bones can be found where they were washed together by violent flood waters and buried under mud, sand and rock. Many of the animals were torn apart and their bones broken and jumbled-up. The muds and sands hardened like concrete to form the great layers of fossil rocks we find today.

Quick flood burial would be the only way that so many dinosaurs and other things could have become fossilized in the way scientists have found them. Animals and plants will fossilize only if they are buried quickly and deeply - before predators, decay and weather destroy them.

Review: What are the main ingredients for making fossils?

Conclusion: Conditions during the Flood were ideal for “fossilizing” millions of animals, plants and even dinosaurs.

For much more information about dinosaurs and the Bible [Go]