Who invented the idea of a flat Earth?

Contrary to what most people think, the Earth was known to be spherical in ancient times. The ancient Greeks even calculated its circumference with surprising accuracy.

Evolutionists often falsely accuse creationists of believing in a flat Earth. But neither history nor modern scholarship supports the claim that Christians ever widely believed that the Earth was flat. And the Bible doesn't teach it.

Christianity has often been accused of opposing science and hindering technology throughout history by superstitious ignorance. However, a closer study of historical facts shows that this accusation is ill-founded.

In his book The Discoverers, author Daniel Boorstin stated:

“A Europe-wide phenomenon of scholarly amnesia… afflicted the continent from AD 300 to at least 1300. During those centuries Christian faith and dogma suppressed the useful image of the world that had been so slowly, so painfully, and so scrupulously drawn by ancient geographers.”1

Christianity has often been held responsible for promoting the flat Earth theory. Yet, it was only a handful of so-called intellectual scholars throughout the centuries, claiming to represent the Church, who held to a flat Earth. Most of these were ignored by the Church, yet somehow their writings made it into early history books as being the “official Christian viewpoint.”

The earliest of these flat-Earth promoters was the African Lactantius (AD 245-325), a professional rhetorician who converted to Christianity mid-life.

He rejected all the Greek philosophers, and in doing so also rejected a spherical Earth. His views were considered heresy by the Church Fathers and his work was ignored until the Renaissance (at which time some humanists revived his writings as a model of good Latin, and of course, his flat Earth view also was revived).

Next was sixth century Eastern Greek Christian, Cosmas Indicopleustes, who claimed the Earth was flat and lay beneath the heavens (consisting of a rectangular vaulted arch). His work also was soundly rejected by the Church Fathers, but liberal historians have usually claimed his view as typical of that of the Church Fathers.

US Library of Congress head, Daniel Boorstin (quoted above), like historians before him, simply followed the pattern of others without checking the facts. In fact, most of the Church Fathers did not address the issue of the shape of the Earth, and those who did regarded it as “round” or spherical.

In 1828, American writer Washington Irving (author of Rip Van Winkle) published a book entitled The Life and Voyages of Christopher Columbus. It was a mixture of fact and fiction, with Irving himself admitting he was “apt to indulge in the imagination.”

Its theme was the victory of a lone believer in a spherical Earth over a united front of Bible-quoting, superstitious ignoramuses, convinced the Earth was flat. In fact, the well-known argument at the Council of Salamanca was about the dubious distance between Europe and Japan which Columbus presented—it had nothing to do with the shape of the Earth.

In 1834, the anti-Christian Letronne falsely claimed that most of the Church Fathers, including Augustine, Ambrose and Basil, held to a flat Earth. His work has been repeatedly cited as “reputable” ever since.

In the late nineteenth century, the writings of John William Draper and Andrew Dickson White were responsible for promoting the myth that the church taught a flat Earth. Both had Christian backgrounds, but rejected these early in life.

Englishman Draper convinced himself that with the downfall of the Roman Empire the “affairs of men fell into the hands of ignorant and infuriated ecclesiastics, parasites, eunuchs and slaves” these were the “Dark Ages.” Draper's work, History of the Conflict between Religion and Science (1874), was directed particularly against the Roman Church, and was a best seller.

Meanwhile White (who founded Cornell University as the first explicitly secular university in the United States), published the two-volume scholarly work History of the Warfare of Science with Theology in Christendom, in 1896.

Both men incorrectly portrayed a continuing battle through the Christian era between the defenders of ignorance and the enlightened rationalists. In fact, not only did the church not promote the flat Earth, it is clear from such passages as Isaiah 40:22 that the Bible implies it is spherical. (Non-literal figures of speech such as the “four corners of the Earth” are still used today.)

While many will have lost their faith through the writing of such men as Irving, Draper and White, it is gratifying to know that the following encyclopedias now present the correct account of the Columbus affair: The New Encyclopaedia Britannica (1985), Colliers Encyclopaedia (1984), The Encyclopedia Americana (1987) and The World Book for Children (1989).

There is still a long way to go before the average student will know that Christianity did not invent or promote the myth of the flat Earth. 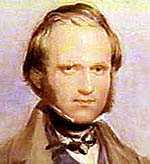 Charles Darwin, the most famous promoter of evolutionism.

The idea that the Earth is flat is a modern concoction that reached its peak only after Darwinists tried to discredit the Bible, an American history professor says.

Jeffrey Burton Russell is a professor of history at the University of California in Santa Barbara. He says in his book Inventing the Flat Earth (written for the 500th anniversary of Christopher Columbus's journey to America in 1492) that through antiquity and up to the time of Columbus, “nearly unanimous scholarly opinion pronounced the Earth spherical.”

Russell says there is nothing in the documents from the time of Columbus or in early accounts of his life that suggests any debate about the roundness of the Earth. He believes a major source of the myth came from the creator of the Rip Van Winkle story-Washington Irving-who wrote a fictitious account of Columbus's defending a round Earth against misinformed clerics and university professors.

But Russell says the flat Earth mythology flourished most between 1870 and 1920, and had to do with the ideological setting created by struggles over evolution. He says the flat-Earth myth was an ideal way to dismiss the ideas of a religious past in the name of modern science. 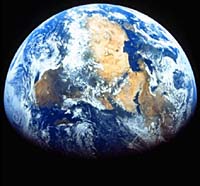 The Bible of course teaches the correct shape of the Earth. Isaiah 40:22 says God sits above “the circle of the Earth” (the Hebrew word for “circle” can also mean a “sphere”).

Also, Luke 17:34-36 depicts Christ's Second Coming as happening while some are asleep at night and others are working at day-time activities in the field-an indication of a rotating Earth with day and night at the same time.

Copyright © 1998, 2004, Creation Ministries International, All Rights Reserved—except as noted on attached “Usage and Copyright” page that grants ChristianAnswers.Net users generous rights for putting this page to work in their homes, personal witnessing, churches and schools.