The Bible refers to “the four corners of the earth.” How can a spherical Earth have corners? 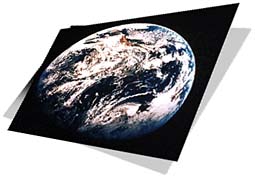 Perhaps no phrase in Scripture has been so controversial as the phrase, “the four corners of the earth.” The word translated “corners,” as in the phrase above, is the Hebrew word כָּנָף (transliteration: KANAPH). Kanaph is translated in a variety of ways. However, it generally means extremity.

The Greek equivalent in Revelation 7:1 is gonia. The Greek meaning is perhaps more closely related to our modern divisions known as quadrants. Gonia literally means angles, or divisions. It is customary to divide a map into quadrants as shown by the four directions.

Some have tried to say there are four knobs, or peaks on a round Earth. Regardless of the various ways kanaph is translated, it makes reference to EXTREMITIES.

There are many ways in which God the Holy Spirit could have said corner. Any of the following Hebrew words could have been used:

Instead, the Holy Spirit selected the word kanaph, conveying the idea of extremity.

It is doubtful that any religious Jew would ever misunderstand the true meaning of kanaph. For nearly 2,000 years, religious Jews have faced the city of Jerusalem three times daily and chanted the following prayer:

Sound the great trumpet for our freedom,
Raise the banner for gathering our exiles,
And gather us together from THE FOUR CORNERS OF THE EARTH
into our own land.

The Book of Isaiah describes how the Messiah, the Root of Jesse, shall regather his people from the four corners of the Earth. They shall come from every extremity to be gathered into Israel.

"And in that day there shall be a Root of Jesse,
Who shall stand as a banner to the people;
For the Gentiles shall seek Him,
And His resting place shall be glorious."
It shall come to pass in that day
That the LORD shall set His hand again the second time
To recover the remnant of His people who are left,
From Assyria and Egypt,
From Pathros and Cush,
From Elam and Shinar,
From Hamath and the islands of the sea.
He will set up a banner for the nations,
And will assemble the outcasts of Israel,
And gather together the dispersed of Judah
From THE FOUR CORNERS OF THE EARTH.
(Isaiah 11:10-12, New King James Version)