What About the Christian Science book, Science & Health…? 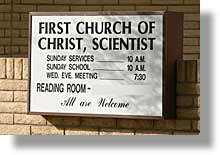 You've probably been on the receiving end of the relatively recent, yet enthusiastic, advertising blitz sponsored by The Church of Christ, Scientist. Their campaign has included brief radio testimonials, signs in store windows for spirituality.com, and even strategically placed kiosks in malls, peddling church material.

One item regularly promoted by the church is a paperback text entitled Science and Health with Key to the Scriptures. The text was authored and published by the founder of Christian Science, Mary Baker Eddy, in 1875. Today, the Christian Science organization claims that over ten million copies have been sold, that the book has “transformed the lives of millions,” and that it will "provide fuel for your spiritual journey."

Over the years we have corresponded, and become personally acquainted, with a number of folks affiliated with Christian Science. Some read our thoughtletters regularly. In almost every case we have found Christian Scientists to be sincere and gracious. However, sincerity and grace do not necessarily imply sound doctrine. It therefore seems important to press the issue by asking for answers to four hard questions.

Also read: An open letter to followers of the Christian Science movement - GO

Text copyright Copyright © 2004, AIIA Institute, All Rights Reserved—except as noted on attached “Usage and Copyright” page that grants ChristianAnswers.Net users generous rights for putting this page to work in their homes, personal witnessing, churches and schools.