How do we know Christ really rose from the dead?

See this page in: Indonesian, Spanish 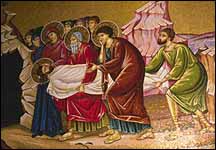 Mosaic of carrying Christ to tomb after crucifixion

Death is man's greatest enemy, and every man, no matter how great, eventually dies. The whole world—physical, biological and social—is under the reign of death, imposed by God's Curse on man's dominion when he first rejected God's word and brought sin into the world (Genesis 3:17). But Jesus Christ, the eternal Son of God and the world's promised Redeemer, has conquered death, bearing the Curse Himself (Galatians 3:13), and thus opening the way to God and everlasting life.

The bodily resurrection of Jesus Christ from the dead is the central fact of the Christian faith. As Paul wrote: "If Christ be not raised, your faith is in vain; ye are yet in your sins" (I Corinthians 15:17).

The entire structure of Christianity—and indeed of any hope for eternal life and for any meaning to human existence—stands or falls with Christ's resurrection.

The fact of His resurrection is the most important event of history and therefore, appropriately, is the most certain fact in all history. It is supported by a wider variety of testimonial and other evidence than any other historical event that has ever taken place since the world began. It is therefore mandatory that every individual must face the issue of the claims of Christ on his own life and service.

The very fact of Christianity is proof in itself.

Similarly, their greatest annual observance was the Passover, but this soon became Easter for them, when they realized that Christ had fulfilled the Passover, dying as the Lamb of God, and then rising again from the dead. These institutions—observance of the Lord's day and Easter, as well as the Lord's supper, and even the Christian Church itself—can be traced back to the apostolic period, and only the fact of the resurrection can account for them.

There can be no doubt whatever that the apostles and early Christians, by the tens of thousands, believed and preached the resurrection. Is it possible they could have been wrong and that their faith was based on some wicked deception or some fanatical delusion?

They certainly had every reason to consider this possibility. Most of them suffered severely for their faith, losing their possessions and often their lives in the great Jewish and Roman persecutions of the first century. They would hardly have persisted in their testimony unless they had been firmly persuaded, after thorough consideration of all the facts, that their Savior had conquered death!

Many saw Jesus Christ alive after his death.

They had witness of the apostles, of course, and also of the “five hundred brethren at once” (I Corinthians 15:6), all of whom had seen the lord Jesus after His resurrection, and they were convinced their testimony was true.

Some have suggested that these post-resurrection appearances of Christ were only visions or hallucinations, or perhaps a case of mistaken identity. But visions and hallucinations don't occur repeatedly like this, to individuals and to groups, indoors and outdoors. And certainly the disciples could recognize the One who had been with them every day for more than three years.

As a matter of fact, when they saw Him in the upper room after the resurrection, they themselves first “supposed that they had seen a spirit” (Luke 24:37). But then He invited them to touch Him and especially to note the nail scars in His hands and feet. Then He ate dinner with them, and they could no longer doubt that it was Jesus Himself, in the same body, as they had always known Him.

Is it possible Christ did not really die?

Some have suggested that He never really died, but only fainted on the cross, thus illustrating the absurd lengths to which men will go to avoid facing facts. The Roman soldiers pronounced Him dead, the mixture of blood and water had poured forth from His wounded side, He was bound up in a great weight of grave clothes, and was sealed in a tomb for three days. A grievously wounded and weakened, almost-dead Jesus could never have inspired His disciples to the heights of courage and power which they soon began to manifest. Even if He had only swooned on the cross, He must have died soon after as a defeated and now-impotent leader.

In addition to the ten or more post-resurrection appearances of the Lord, there is the evidence of the empty tomb.

The empty tomb has never been explained, except by the physical resurrection.

The tomb had been sealed with the Roman seal and was guarded, under pain of death, by a detachment of Roman soldiers, and a great stone was rolled in front of its entrance. Nevertheless on the first Easter morning, the soldiers fled in terror as a mighty angel rolled away the stone, and the body had vanished from the grave, with the grave clothes still as they had lain before He had passed out of them.

The empty tomb has never been explained, except by the bodily resurrection. If the body actually were still there, or in any other place still accessible to the Jews or Romans, they would certainly have produced it as a sure means of immediately quenching the spreading flame of the Christian faith. If the apostles or other friends of Jesus somehow had the body themselves, and thus knew He was dead, they could never have preached His resurrection as they did, knowing it would surely mean persecution for them and possibly death. No man will willingly sacrifice his life for something he knows to be a lie!

Thus we have the certain testimony of the empty tomb and the many appearances of Christ after His resurrection, further supported by the uniform teaching of Scripture, innumerable references to it in the non-Biblical literature of the early Christians, the institutions of the Church, the Lord's Day and Easter, the promises and prophecies of the old Testament, as well as the very necessity to bring real meaning and confidence into human life, all as proof of the fact of the bodily resurrection of Christ from the dead.

There is no other fact of history supported by such an array of evidence as this! And the final evidence is the experiential reality of the assurance of salvation and eternal life, enjoyed by each person who has ever placed his personal faith in the living Christ.

“If thou shalt confess with thy mouth the Lord Jesus, and shalt believe in thine heart that God hath raised him from the dead, thou shalt be saved” (Romans 10:9).