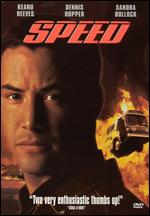 This film, which was a major career boost for both Keanu Reeves and Sandra Bullock, is aptly titled. With a plot built around a terrorist-bombing-extortion-deadline theme, it’s probably the fastest-moving film of its type ever made.

The opening credits jump right into an action scene. We see immediately that the bad guy is played by Dennis Hopper and is ruthless; we learn later that his character is Howard Payne, a retired bomb-squad cop with a grudge. Payne has trapped 13 people in an elevator car, severing the cables. He’ll blow the car’s emergency brakes unless he gets $3 million. LAPD officers Jack Traven and Harry Temple (Reeves and Jeff Daniels) outsmart Payne and save the hostages, but Payne gets away and now holds an additional grudge. Later, he deliberately involves Jack in another extortion scheme; there’s a city bus rigged to explode if its speed drops below 50 MPH (and Payne will detonate it manually if anyone tries to get off). Most of the film revolves around the efforts of Jack, and of commuter Annie Porter (Bullock) who takes over the wheel after the driver is shot, to save the lives of the other passengers. But even after the bus crisis is over, the “Speed” doesn’t let up.

Content warnings: The action scenes and special effects are very realistic, which means that (for viewers who suspend disbelief, ignore the plot holes and get emotionally involved) the film is a nonstop adrenaline rush featuring the deaths of several innocent people and the constant threat of more deaths. The profanity is extreme. There’s no sexual content; but Jack and Annie joke that if they get involved after this is all over, relationships based on a crisis situation don’t last so they’d better base theirs on sex instead.

Positive content: Jack and Harry unhesitatingly risk their lives in order to save others. And Annie, who was drafted into service by the accident of just being there, also shows great courage and composure.

The Bible says: “But we should not lose heart in doing good, for in due time we shall reap, if we do not faint.” (Gal. 6:9, KJII Version) I realize this doesn’t refer to police work, but it can be applied as a general principle. Payne “fainted.” After being injured in the line of duty, he resented the size of his retirement and disability package and he let a “root of bitterness” (Heb. 12:15) grow up until it controlled his whole life. Taking the story seriously for a moment, it’s hard to think of anything sadder than a man spending 30 years saving people by dismantling terrorist bombs, and then at the end of his life turning into a terrorist himself. That’s a pretty strong example of “don’t let this happen to you.”

The whole premise is based on beating the clock when it comes to saving a bus load of passengers. The problem with this movie is that there is no place where the audience can breathe for a moment. Even the few moments of comic relief are presented on the run while in the middle of the action. I got bored with the non-stop chasing after about a half-hour. This is only for those who like constant action. My Ratings: [Average / 2]