for some intense action/violence and language 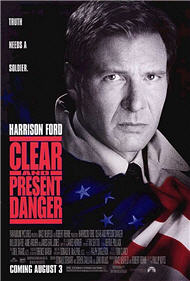 The Hunt for Red October

The final installment in the “Jack Ryan” trilogy that includes “The Hunt for Red October” and “Patriot Games,” this film again features James Earl Jones as Admiral James Greer (CIA Deputy Director of Intelligence) and Harrison Ford as Dr. Ryan (who becomes Acting Deputy Director when Greer is stricken with cancer).

The film’s title is a technical term used to justify extraordinary government action, and that’s exactly what we get. The entire family of a good friend of the President of the U.S. has been murdered. President Bennett (Donald Moffat) wants to know who did it and why. When Ryan informs him that it was a hit by a Colombian drug cartel headed by Ernesto Escobedo (Miguel Sandoval), the President passes some vague and discreet instructions to Nat’l Security Advisor James Cutter (Harris Yulin), who in turn passes them to Deputy CIA Director Robert Ritter (Henry Czerny). Perhaps because of their integrity, Greer and Ryan are kept out of the loop as to what’s really going on.

The language is strong, but much cleaner than in “Patriot Games.” The violence is severe for a PG-13. There’s one scene of sexual violence (a man no longer needs his girlfriend as an unwitting spy, so he snaps her neck in the middle of foreplay); and besides the implied killing of children in the opening scene, there’s a scene of a laser-guided bomb being dropped on several drug dealers and their families at a party.

The most disturbing element to me is the theme of the U.S. conducting a secret and illegal foreign war against the drug cartels, and then ruthlessly covering its tracks. The U.S. has indeed done a number of sneaky things in its history; I might be interested in a film based closely on one of those real-life events, but I don’t care for a fictitious story that just paints the entire government as dirty. Almost everyone in this film is guilty of something. The tagline is “Truth needs a soldier,” and of course Ryan will fill the need.

Some reviewers think this film is the best of the trilogy. I think “Red October” was the best, and it was downhill from there. I don’t particularly recommend this one; watch it if you can’t bear not completing the series.

Positive—The movie stays pretty true to the book, though not completely because of time. I think Tom Clancy knows his stuff, and shows it in the book and movie, and I recommend both.
My Ratings: [Average / 3]