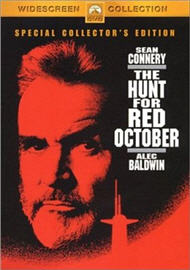 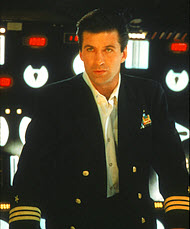 Captain Marko Ramius (Sean Connery) is the commander of a new Typhoon-classed Soviet Submarine. This high-tech nuclear sub has an advanced new caterpillar drive that creates plenty of nervousness among the brass of the U.S. Military—and rightly so! It carries enough nuclear missiles to wipe thousands of miles of Eastern U.S. seaboard off the map! Captain Ramius, a Lithuanian whose only family was a recently deceased wife, causes the entire Russian naval fleet to engage in a large-scale hunt for the him as he navigates the Red October toward the United States. Is it a search and rescue mission, or is Captain Ramius attempting to defect to the U.S., along with the Red October? If defecting is on his mind, how will he convince the entire crew to support him in this deadly endeavor?

Indeed, CIA Analyst Jack Ryan (Alec Baldwin) stands firm in his conviction that Ramius is attempting to defect. But he faces a big problem—testing his theory. The Red October is invisible to sonar, and to make matters worse, the Russians are constantly closing in on him and the U.S. Military will sink the Red October if it gets too close to American soil.

“The Hunt for Red October” will leave you marveling at the action and effects wondering “Can they do that?” If you rent this, be sure to enjoy it on a big screen with surround sound! This movie portrayed nice tidbits of humor at appropriate times and educates the public about some not-too-far-off military “secrets”.

The main detriment to this movie is language! While a dash of foul language may add realism, a lot of this language could be cut out. In fact, the edited version for television actually cuts out most bad language (except for da**, etc.). As a military-action style movie, “…Hunt…” did have some violence (mostly necessary for plot development). Mostly shootings. Sex-related references are few and generally mild.

From a Christian standpoint, this one is obviously just for entertainment. Although Ramius has a Bible (it was his wife's) and I think there may have been a reference to scripture, almost all the reliance is based on humans and their skills. If viewed with the right frame of mind, this movie can leave one in awe of the God-given skills He has given to the crown of His creation—mankind.