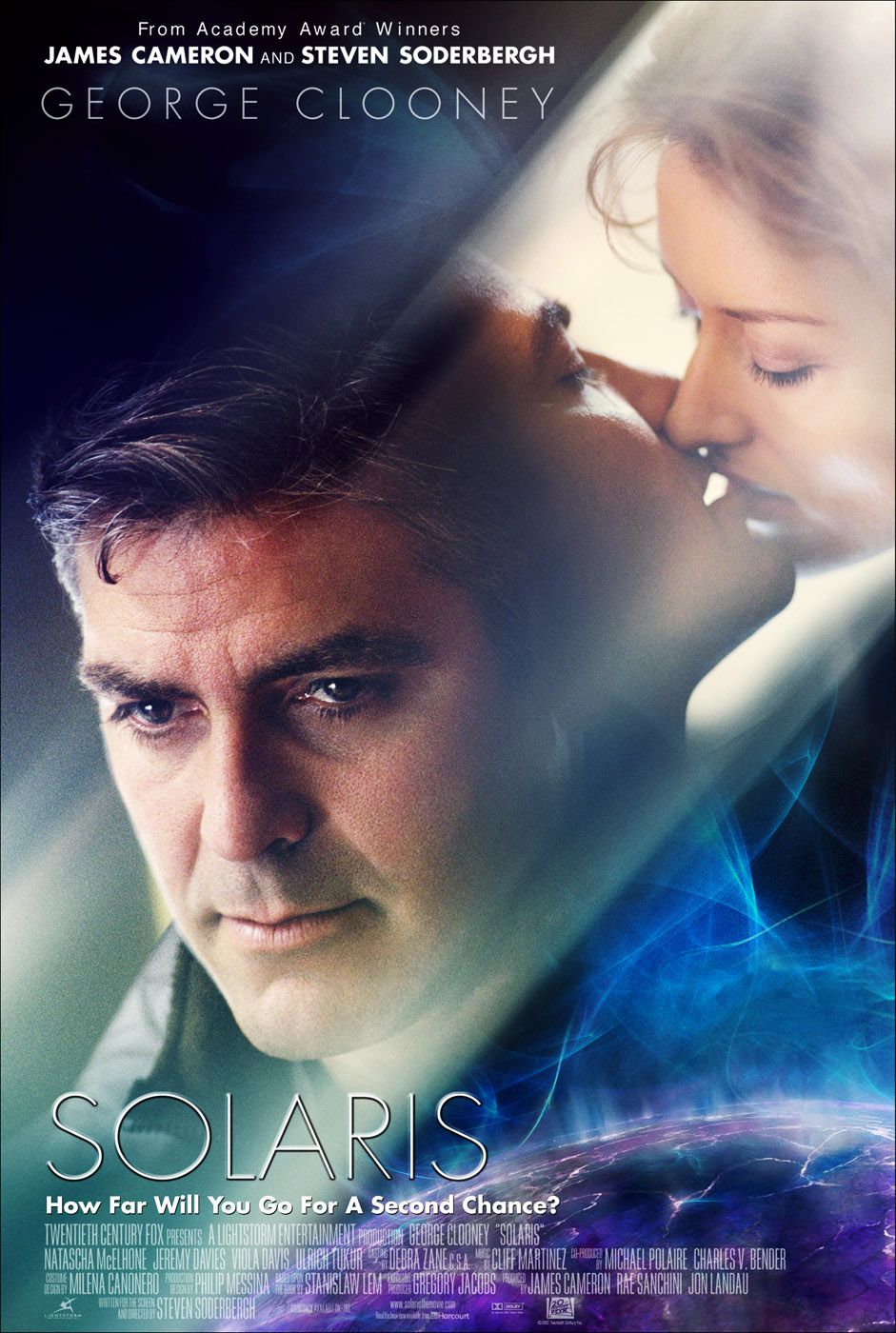 Science fiction is an excellent organ for exploring questions of faith. As the name Solaris implies, we are looking at both the source of biological life, the sun, and the source of spiritual life, the Son. How does the film help us in understanding the source of our lives and their future sustenance? What is required for a person to experience peace with our past in order to have a future peace? What is different between the peace offered on Solaris and that offered in the Son of God?

Often the struggles we have in life imply a deeper decision that we are either avoiding or needing to make. How does each person’s response to the phenomenon on Solaris portray the place of their soul? What do you believe your experience would be if you found yourself in such a sphere?

Why is it that when we experience something unusual, even the opportunity to heal something, that we often first experience it as “something gone wrong?” How would life be different if we approached life with more trust and hope that “Someone” is guiding our path and allowing this experience? If we do not believe our path is guided then how do we find our way in the various struggles of past and future?

Remember the first time you watched the now SciFi classic 2001-a Space Odyssey? I do. It is a film saturated with suspense and mystery as the story unveils the intentions of a computer named HAL. SciFi fans will tell you there is nothing like a good SciFi film: a perfect blend between a good story and nice eye-candy. Unfortunately, “Solaris” fails at both ends of the spectrum: it is a very boring story with special effects that just aren’t interesting.

I’ve watched good stories like Blake’s 7 that suffered from large-budget effects. I’ve even enjoyed movies that were largely all on big effect, but slim in the plot department. “Solaris” reminds me of another SciFi failure, “Battlefield Earth.” It is surprising that director Steven Soderbergh could make such a bland space opera. Mr. Soderbergh’s primary claim to fame has been his cinematic work behind the camera. The only notable thing he does in this film is spend an uncomfortable amount of time forcing the viewer to watch George Clooney’s backside. That event certainly gave new definition to “partial nudity.” It’s the same nudity included in the “PG-13” “A Knight’s Tale”. The difference between the two is that “A Knight’s Tale” used it as a plot point to demonstrate shame and Soderbergh uses it to demonstrate intimacy. I strongly disagree with the MPA’s decision to reverse the “R” rating and expand the offensive boundaries of teenage movies.

“Solaris” even fails at exploring it’s own worldview on the subject of fate and second chances. Speaking of second chances, this is the second time that Stanislaw Lem’s novel has been brought to the big screen. The first time was in 1972 by Russian director Andre Tarkovsky. His rendition was praised as a Russian version of 2001-a Space Odyssey. Tarkovsky’s version ran for 165 minutes while Soderbergh’s is a quick 95 minutes.

Our story begins with Psychiatrist Chris Kelvin (George Clooney) struggling to overcome the loss of his wife. While he is wrestling with the remorse of her suicide, Chris is asked to solve a mystery taking place on a space station that is orbiting the planet Solaris. Most of its crew have lost their lives and he is asked to assess and analyze the situation. In one of the weakest parts of the story, Chris never truly behaves like a psychiatrist on a mission. He instead finds the space station as another place to become absorbed in his own grief. Chris is not on board long before he awakens to find his wife Rheya (Natascha McElhone) next to him. How can this be possible? The story continues from that point with an examination of death, creation, suicide and resurrection. The supporting characters are thin and sketchy.

My strong recommendation is to skip this one. I am not alone in this opinion. Many other well known critics did not like “Solaris”. It does have its share of objectionable sexual material and language. It is also a depressing excuse of a Sci-Fi flic. I wouldn’t even waste my time later on renting it.

Positive
Positive—Solaris took me on a deep, ponderous and involving examination of essential existential questions. The pace is intentionally slow to permit the viewer the opportunity to explore in his or her own thoughts and emotions how memory and projection shape how we experience. The Rheya of Chris’s memory is not the same as the Rheya who was his wife, and yet she has a reality, even as a projection, which allows her to diverge from her starting point in Chris’s mind to obtain a semi-autonomous existence. This film is about transformation and transcendence. If you participate in contemplation of the deep questions brought forward by this film it will reward you with something truly remarkable and real.
My Ratings: [Good / 5]
Nicholas Fulford, age 43
Positive—Somehow I feel as f I should not waste my time telling you why I loved this movie… many people will not feel as I do. However, for true fans of Kubrick (or perhaps even Bergman) this darkly existential piece of surrealism has a well-chilled beauty to it. I thoroughly enjoyed it, and would love to see it again sometime, but preferably on the big screen only. The space scenes are awesome (reminding me of the last 20 minutes of 2001,) and the slow but effective story development keeps you involved at all times. I would NOT recommend this to anyone looking for a “shoot ’em up.”
My Ratings: [Average / 4½]
Mike Koger, age 42
Positive—I can’t imagine any serious, thinking christian not being fascinated by the philosophical and spiritual issues raised in Solaris, a quiet, personal science fiction epic that stands far above the tepid Hollywood offerings of the Thanksgiving season.

I frequently visit this site, as a filmmaker seeking reviews and as a non-Christian looking for alternate opinions on Cinema—I am often impressed and surprised by the understanding and depth of reviews from a forum that is ostensibly (usually unfairly) viewed as stale and narrow-minded. So when films as provocative and compelling as “Solaris” are too-harshly judged, I have to speak up. Any Adult who’s ever been in love will have something wonderful in Solaris.
My Ratings: [Average / 5]
Joe Foster, age 23, non-Christian
Negative
Negative—This movie was horrible for anybody! It made absolutely no sense to me or the other people in the theater. The plot is really hard to make sense of, and I am now beginning to think that this plot was based on a random dream. Haha maybe not. As far as morality goes, this film does display some sexual scenes that last for quite some time. Even if you’re a George Clooney fan, it definitely wouldn’t hurt to skip this one.
My Ratings: [Better than Average / 1]
Manoj, age 19
Comments from young people
Negative—Possibly the most boring movie I’ve ever seen. Halfway through I was wondering how much of George Clooney’s hiney I could handle. I got too much of it, anyway. There wasn’t really a lot of point to this flick. I didn’t draw any amazing points or life changing ideas from it. I wasn’t even entertained. What a waste of seven bucks. The only thing that this movie proved to me is that associating any amount of action with sci-fi is a serious mistake.
My Ratings: [Very Offensive / 1½]
Jean, age 18
Negative—A very slow-moving film with no comprehensible plot and no satisfactory ending. Most of its contents aren’t objectionable, but nothing really happens, nothing makes sense, and you can’t get any point out of it all if you try. It was 95 minutes long, and I was fighting to stay awake, foolishly thinking that the ending would tie everything together. I should have slept.
My Ratings: [Better than Average / 1½]
Janna Beth, age 18
Movie Critics
…Clooney’s bare backside gets more screen time than some of the film’s minor characters…
Bob Smithouser, Focus on the Family
…gets us to consider the differences that exists between perception and reality… Slow, thought-provoking, sometimes frustrating film…
Michael Elliott, Movie Parables
…1 F-word, 6 scatological terms, 1 religious profanity, 1 religious exclamation…
Kids-in-Mind