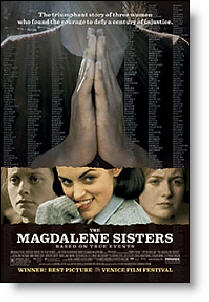 
About Sexual Abuse of Children

Here’s what the distributor says about their film: A drama which charts several years in the young lives of four fallen women who were rejected by their families and abandoned to the mercy of the Catholic Church in 1960’s Ireland. While women’s liberation is sweeping the globe, these women are stripped of their liberty and dignity, and they’re condemned to indefinite sentences of servitude in The Magdalene Laundries in order to atone for their sins. The last Magdalene Asylum in Ireland closed in 1996, and only since has the true horror of conditions in these institutions begun to emerge.

Positive
Positive—This is a fabulous movie which depicts the cruelty of nuns in Ireland in the 20th century. The girls are all believable in the film which is based on true events. One wonders why more than 50% of the Catholics in Ireland are no longer practicing their faith. That this could go on in Ireland until 1996 is unbelievable. No formal apology has been made by the Church. Another cover-up.
My Ratings: [Excellent!/5]

Anita Bischoff, age 50
Positive—This film is worth a viewing by adults interested in the horrors of Christianity gone wrong. It contains a lot of offensive material, but all is needed to get across the point of abuse, frustration, etc.
My Ratings: [Extremely Offensive/4]

Roger Ebert, Chicago Sun-Times
…A fierce, brilliant film that breaks (and then mends) your heart… Mullan lets us see how deluded people can make a real-life hell behind a false facade of heaven…

Michael Wilmington, Chicago Tribune
…will send a chill up many spines—and it’s not a thriller. It’s a drama about strict Irish nuns… will make you furious and dejected, but in the end it offers an optimistic if unsettling twist.

Kathy Cano Murillo, Arizona Republic
…The individual stories told in the film resonate less than the oppressive environment evoked, which is depicted in painstaking, and painful, detail…

Jeremiah Kipp, Filmcritic.com
…uniformly strong performances …Nigel Willoughby’s cinematography conveys claustrophobic surroundings without suffocating the viewer, who may already feel kicked in the gut by this unflinching snippet of history…

Ty Burr, Boston Globe
…full of forceful, aching performances. …The sisters who ran the asylum told their wards—and themselves—that this servitude was about salvation, a means to reaching heaven. The reality “The Magdalene Sisters” exposes is that they made the women’s lives a living hell, one many did not escape.