An open letter to our Roman Catholic friends 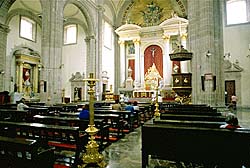 What does Romanism say?

In November of 1544, in the northern Italian community of Trent, the Roman Catholic Church convened its 19th ecumenical council. The Council of Trent officially lasted from December of 1545 through December of 1563. During that time the Church intensified its ongoing affront on Protestantism by codifying Catholic dogma in unprecedented fashion, in matters ranging from the strategic place of the sacraments to the doctrines of transubstantiation, purgatory, indulgences, the veneration of the Virgin Mary and the saints, and the efficacy of relics. Tradition was declared coequal to Scripture as a basis for authority.

Perhaps most significant was the Roman Catholic Church’s claim that salvation and justification were the result of WORKS, as well as faith.

Canon 9 of the Council of Trent states categorically,

If any one saith that by faith alone the impious is justified; in such wise as to mean, that nothing else is required to cooperate in order to the obtaining [of] the grace of Justification, and that it is not in any way necessary, that he be prepared and disposed by the movement of his own will; let him be anathema.


If any one saith, that man is truly absolved from his sins and justified, because that he assuredly believed himself absolved and justified; or, that no one is truly justified but he who believes himself justified; and that, by this faith alone, absolution and justification are effected; let him be anathema.

Therefore by the deeds of the law there shall no flesh be justified in [God’s] sight: for by the law is the knowledge of sin. —Romans 3:20

Therefore we conclude that a man is justified by faith without the deeds of the law. —Romans 3:28

He saved us, not on the basis of deeds which we have done in righteousness, but according to His mercy, by the washing of regeneration and renewing by the Holy Spirit." —Titus 3:5

But the Council of Trent met a long time ago. Hasn’t Rome since modified its position?

"Has Rome’s position changed? In fact it has not. The Vatican II documents as well as the new Catechism of the Catholic Church reinvoke the theological position of the Council of Trent, condemning the gospel of justification by an imputed righteousness" (Michael Horton, Founder & President of Christians United for Reformation, 1995).

“…James [2:24 ‘You see that a man is justified by works, and not by faith alone.’] is dealing with people who profess to be Christians, and yet they don’t evidence the reality of their faith by their works [deeds]. Over, and over again… people will say they have faith and they don’t have works, and James is saying that real faith always produces works as a result… The question is, ‘A man may say that he has faith, but will that faith justify him?’ If it is just a ‘said’ faith"—no, it won’t!”

What did Martin Luther say?

Luther called justified by faith alone (sola fide) “the article upon which the Church stands or falls.”

Are There Other Problems?

Try reconciling I Timothy 2:5—“For there is one God, and one mediator also between God and men, the man Christ Jesus”—with the longstanding Catholic tradition of praying to Mary, illustrated by the following Prayer to the Blessed Virgin (“Never Known to Fail”), typical of those published in many local newspapers:

Blessed Mother of the Son of God, Immaculate Virgin, assist me in this necessity.

Oh Star of the Sea, Help me and show me herein you are my Mother.

Oh, Holy Mary, Mother of God, Queen of Heaven and Earth, I humbly beseech thee from the bottom of my heart to succor me in this necessity.

There are none that can withstand your power.

Oh show here you are my Mother. Oh, Mary conceived without sin, pray for us who have recourse to thee (3 times).

Thank you for your mercy to me and mine. Amen.

Are you trying to share the Biblical message of salvation with a Catholic who doesn’t understand what it means to be regenerated and have a relationship with Jesus Christ? See the “About Catholicism” page in the Effective Evangelism section of Christian Answers.