Protestants have historically held Mary in high regard as a godly and highly favored woman of God, a repentant sinner saved by the grace of her divine Son.

Catholic dogma, on the other hand, has exalted her in an irresponsible and idolatrous way. She is declared to have been free from all original sin (the dogma of the Immaculate Conception, first declared in 1854; Catechism 491-492), free from any actual sin during her life (Catechism 411), and perpetually a virgin even after the birth of Jesus (Catechism 499-500).

Mary… was redeemed from the moment of her conception… preserved immune from all stain of original sin. —Catechism 491 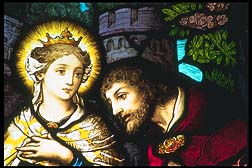 Allegedly, Mary was taken, body and soul, into Heaven (Catechism 974). This is the dogma of the “Assumption of Mary,” declared in the year 1950! In Heaven, Mary supposedly intercedes for the church as “advocate, helper, benefactress, and mediatrix” (Catechism 969). She is made virtually a co-savior with her Son (Catechism 968). Recently, an increasing number of prominent Catholics have petitioned the church to officially declare that Mary can provide forgiveness of sins!

These doctrines are so far afield from the Scriptures that biblical Protestants are amazed and saddened.

For there is one God, and one MEDIATOR between God and men, the man Christ Jesus. —1 Timothy 2:5 (KJV)

Jesus Christ of Nazareth… neither is there salvation IN ANY OTHER: for there is none other name under heaven given among men, whereby we must be saved. —Acts 4:10-12 (KJV)