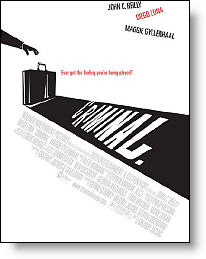 “Ever get the feeling you’re being played?”

Ever heard of the movie “Nine Queens”? Chances are you haven’t; I hadn’t heard of it till yesterday. It’s the Argentinean film that the movie “Criminal” is based on, and if it is anything like the remake, it’s definitely worth a look. But, chances are most people haven’t heard of this movie either; the theater I saw it at yesterday didn’t even have it on the board, I had to check Web sites to know it was playing.

“Criminal” stars one of my personal favorite performers, John C. Reilly (“Chicago,” “The Good Girl”) as veteran con-man Richard Gaddis who at the start of the film is seen scoping out a casino. He sees Rodrigo, played by Diego Luna (“Dirty Dancing: Havana Nights”) who cons a waitress into giving him change for a drink twice. Rodrigo then moves down a few tables and tries his hand at the same trick again, but this waitress doesn’t fall for it, and yells for security. Gaddis quickly moves in, says he is an LAPD Vice cop, handcuffs Rodrigo and takes him out of the casino. Once out, he takes the cuffs off and tells him to get in the car, where he explains that he is in fact a con-man in search of a new partner for the time being.

Richard is a con simply because that’s the life he chose and now enjoys, but we learn Rodrigo is in it to raise money for his father, who owes a great deal of money to a Russian over gambling debts. Rodrigo reluctantly accepts, although from time to time throughout the rest of the film, Richard will tell him to get out of the car and leave, saying he doesn’t need a partner who “thinks.”

The two spend the first half of their day together conning old women, restaurants, and other small time stuff. Around lunch time, Richard gets a call from his sister Valerie, played by Maggie Gyllenhaal (“Secretary,” “Mona Lisa Smile”) who works at a hotel, and says a man collapsed there and kept saying Richard’s name over and over again. Valerie wants the nuisance out of her hotel, and calls Richard to come clean it up. The two do not get along, for reasons the film makes clear, so their attitudes towards each other are very cold.

Richard and Rodrigo head to hotel, where the man informs them of a huge con in the works to sell a counterfeit bank note to a wealthy foreign businiess man staying in the hotel. This sets up the rest of the film, as the two go about trying to sell the counterfeit, and encounter various twists and turns along the way.

“Criminal” is very well acted by the leads. Reilly proves he can carry a film with ease, and Luna and Gyllenhaal are great in their respective roles. The film is produced by Steven Soderbergh (director of “Ocean’s 11”) and directed by Gregory Jacobs, who was Soderbergh’s assistant on “Ocean’s 11,” so it is in very capable hands.

The film is a real treat to watch; it gets the viewer interested early on, and keeps our interest as the plot unfolds, sometimes in ways we didn’t see coming. The ending is a surprise, but then any ending would have been because the film doesn’t give away many hints. Once the film is over and the viewer is forced to think back for clues, a relatively convenient plot twist is revealed. Conveniences have a tendency to discredit some films, but because the rest of “Criminal” is so strong, they are easy to overlook.

“Criminal” is rated “R” for language, and contains a number of F-words, and other colorful profanities, including uses of the Lord’s name in vain. This is a film aimed at adults, and parents who don’t want their children hearing numerous profanity would be wise not to let them see it. Chances are this little film will come and go without most kids, or adults for that matter, even knowing it was there, which is a shame. As I got to the theater last night and saw the enormous line for the latest “Resident Evil” junk, I hoped that maybe a few people would avoid the mainstream for once and try something a little smaller. But, as I sat in the 200-something capacity theater that was only holding three people, I realized that this may be a small gem that sadly will go unearthed.

I give “Criminal” an overall grade of “B.”