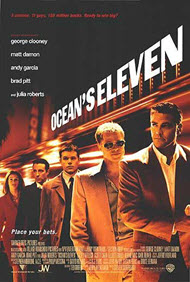 a man saving his princess from danger

lying and deception versus truth

“Ocean’s Eleven,” a remake of the 1960s film with the same name, focuses on one Danny Ocean (George Clooney) who puts together a team of eleven men who plan to pull off the most-successful-ever $150 million Las Vegas casino heist. The movie is so engaging that I found myself guiltlessly rooting for these con artists, even though I knew what they’re doing is completely wrong. But it’s hard not to like this Hollywood hottie “brat pack”, which includes Clooney, Pitt, and Damon balanced out by the older Carl Reiner and Elliot Gould (who also plays Monica’s Dad in TV’s “Friends”). Reiner gives a wonderful performance, and for Clooney “Ocean’s Eleven” is his most impressive work since exiting “ER”. Brad Pitt’s character ate through the whole movie—what’s up with that? Maybe it’s an inside joke?!

“Ocean’s Eleven” is without a doubt a fun way to spend a few hours on a Friday night. It was very entertaining and surprisingly clean compared to other films of its genre. The only sexually suggestive content included some showgirls/exotic dancers as background candy in a scene, but not displaying much skin. The language is very mild with only 2 “f” words, an obscene hand gesture, and a couple of religious profanities.

It would be interesting to compare this remake with the original, which starred Frank Sinatra, Dean Martin, and Sammy Davis, Jr. So while I can’t compare the two, several critics are actually proclaiming this remake even better then the original. How often does that happen?

From a Biblical perspective, this movie does capture the bright lights of the Las Vegas casinos including cigar smoke, shots of hard liquor, and plenty of money money money—all in a somewhat glamorized setting due to the pretty faces of Julia Roberts, Pitt, Damon, and Clooney. However, it’s pretty obvious this film is just good fun and nothing that any rational person would take too seriously. Chances are teens who see this film won’t run out to become high stakes gamblers or decide to pull off a heist of their own.

$150 million split eleven ways? Hmm… I think there’s enough FLESH in all of us to ponder that for a moment or two. it’s the decision that counts, and stealing, no matter what or its value, is clearly wrong according to the Bible (see “What does God expect of me?”). Or, for a thought-provoking look at what a large sum of money obtained through questionable means can do to a life’s relationships, see Billy Bob Thornton’s “A Simple Plan”.

The MPA rating is appropriate. Kids should stay away, but for teens and up this may be a pleasant time. I’d say Hollywood did a pretty good job of bringing this movie back to the big screen.

Todd Adams, age 34
Positive—This is not an exact remake of the 1960 film; for example, instead of the men being military buddies looking to get rich, they are criminals who steal for the thrill of it. The story has a light comedic touch. Clooney and Roberts have some nice scenes together, and Garcia is subtly menacing as the boss of the casinos. Carl Reiner and Elliot Gould have good small roles as a con man, and a patron of the thieves, respectively. There are many moments of suspense when you’ll wonder, “How will they get out of that one?”

The film has a few surprises that fall under the “things aren’t always what they seem” category. The profanity (including a politically incorrect racial remark) is heavy, but the violence is virtually bloodless, and there is no sex. Many scenes involving gambling—it takes place mostly in Las Vegas—and there are scenes of drinking. This is a good, fast paced film; I recommend it for older teens and up.
My Ratings: [Average / 4]

Hillari Hunter, age 40
Positive—I went to see Ocean’s 11 with a few doubts partly because of the bad reviews the original movie had received, but I have to say that I enjoyed the movie and I felt it well worth my while to spend a Friday night watching. It seemed as though this was one of those movies that they had to actually add some profanity to in order to give it the higher rating, for as we all know, PG movies just don’t appeal to the mainstream audience like they used to. If it were not for the two f-words (which you never used to hear in PG-13) and the very unfortunate cursing, this might have made the PG rating. So in one sense I was glad it did not have anything else objectionable (minus a short scene with some dancers).

It is sad when moviemakers today have to add objectionable content to a movie just because they know it will make them more money if they get one rating over another. The movie itself was very entertaining (which is why I go to see movies), the script was fairly well written. It did get a little slow in the middle but there were enough random “laugh scenes” to keep my attention until the climax of the movie when they actually attempt the heist. The conclusion was very good and it kept me guessing all the way until the end which is exactly what I like in a movie. I would recommend it others to see.
My Ratings: [Average / 4]

Andrew, age 21
Positive—I walked into the theatre expecting to see a decent film. I got a lot more than I was expecting. There are obviously morality issues with the writers making the thieves the “good guys”. However, character flaws on the part of the “good guys” are overcome since the movie never really takes itself too seriously. This one is a winner. Smart, hip, stylish film with lots of comic relief. The PG-13 fits. This one would not be enjoyed by kids anyway. it’s adult entertainment.
My Ratings: [Average / 4½]

David, age 33
Neutral
Neutral—This was a fun flick—but stealing is at the heart of it. Profanity and sexual content is prevalent, but the movie is lovable—and predictable. This is the biggest mixed bag movie of the year.
My Ratings: [Very Offensive / 4]

Anon, age 81
Positive—I saw this film opening weekend and really enjoyed it. Steven Soderbergh is a phenomenal director and although I’m not usually a Clooney, Roberts or Damon fan—all of the acting was very good! Pitt and Garcia were brilliant as usual. Although I haven’t seen the original Ocean’s Eleven, I really enjoyed the 21st century version of this Vegas casino heist. For some reason, I left the film with a “feel good” feeling. I assume it’s because the lesser of the two evils (“Ocean’s Eleven” being the “good guys” and Andy Garcia’s character being the “bad guy) got away with something that was otherwise thought impossible. I recommend this to audiences 18 years and older.
My Ratings: [5]

Mary Mataragas, age 28, non-Christian
Negative
Negative—I watched this film because I needed some relaxation, and because of the fairly positive review. And wow, a bad film is even more disappointing when you were expecting it to be good. I have no problem with films that center on the bad guys, as long as the bad guys aren’t glamorized. In my comment on “Despicable Me,” I mentioned that crime looked fun until the bad guy got in trouble, which I liked about it. But this film was like “Minions.” I was waiting patiently for the robbers in this film to fail, to forget one detail, or for one unexpected thing to go wrong. But it never happened.

The only redemptive part of it was the guy getting his wife back. Well, one word: “Fireproof.” This film justifies stealing, and whatever it takes to achieve that goal, as long as you’re stealing from bad people.
My Ratings: Moral rating: Very Offensive / Moviemaking quality: 3½

Gabriel Mohler, age 26 (USA)
Negative—This movie is very lame. George Clooney is dashing, Carl Reiner is colorful, Julia Roberts plays a small, somewhat dull role, but the movie in general is slow, a little muddy, hard to understand, and justifies the crime completely. Sure, the robbery is against a sleezy guy, but still, the movie is about a bunch of crooks who don’t have much going for them. don’t bother seeing it.
My Ratings: [Very Offensive / 3½]

Steve McArthur, age 52
Comments from young people
Negative—Speaking as a person who has lived in Las Vegas all of her life, it’s always wonderful to see a movie involving this city in what the city really is. Granted, there’s far more going on than what happens in the 3-mile Strip of Las Vegas Blvd., but that’s what everyone thinks of, so there you are. This is a city built on escapism and fantasy, there are extremes everywhere and your luck can change completely with a single card. Ocean’s 11 captures that feeling completely and does it in a manner that’s very unthreatening and fun to experience.
My Ratings: [4]

Elisa Haugh, age 18
Positive—…It has a great cast (all you girls will know what I mean) ;) and it was a very interesting movie. I would somewhat compare it to Gone in 60 seconds. But in Ocean’s 11 they are trying to rob a casino, not trying to steal cars. It has a few objectional things in it like when they are in a bar you can see stripers but that doesn’t last long. There is some swearing but I don’t remember too much. Little kids probably shouldn’t see it but for teens and adults it is a good movie.
My Ratings: [Better than Average / 5]

Andrea, age 17
I went to see Ocean’s Eleven on opening night with a friend. We both enjoyed it very much. We thought that it was very entertaining, yet somewhat confusing. I would have to say that that would be the only flaw. There is no nudity, although for a few brief seconds some dancers are shown in “exotic” outfits, some cursing, and no real sexual relations, etc. Overall, we both liked this movie very much, and will probably rent it when it comes out.
My Ratings: [Better than Average]

Kristen, age 15
Neutral—Ocean’s 11 provides the best cast that I’ve ever seen! This was an interesting movie from start to finish. The only flaw was an extremely confusing plot.
My Ratings: [Very Offensive / 4½]

ScreenIt!
…2 F-words… a couple of religious profanities and exclamations…