for pervasive language, some strong sexual content, nudity and drug use. 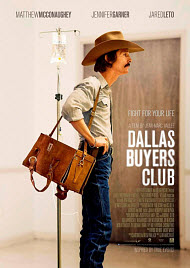 fighting to live / will to live

Once diagnosed with AIDS, did Ron Woodroof use his remaining life wisely? What should he have done, and why? Was he focused on the wrong life, Earthly versus eternal? Physical death versus eternal death?

dangers of fornication and unprotected sex

illegal drug use and drug addiction

Discover God’s promise for all people—told beautifully and clearly from the beginning. Discover The HOPE! Watch it on Christian Answers—full-length motion picture.
Homosexuality

Each year there is a low budget independent film that receives more attention than the others. The 2014 Academy Awards will prepare for that genre with “Dallas Buyers Club.” Directed by Jean-Marc Vallée, a French Canadian best known for “The Young Victoria” and “C.R.A.Z.Y,” “Dallas Buyers Club” gives us a unique story, with very special characters. Matthew McConaughey plays the real life Ron Woodroof, a Texan bull-rider who contracts the HIV virus through a careless sexual encounter with a drug addict. Horrified that he is given 30 days to live, and fighting the local homophobic attitudes, Ron sets out to save himself, and finds a way to save others.

With HIV AIDS breaking out across the world, Ron’s friends abandon him to deal with his illness. Realizing the only medication that will help him is unavailable in the United States, Ron travels abroad to Mexico, and begins a private business of dealing in pharmaceutical drugs illegally. Despite being terminally ill, and dealing with a drug and alcohol addiction, he is able to create solid relationships and make something of the life he has left.

“Dallas Buyers Club” addresses many topics. From a homosexual lifestyle to homophobia, drug usage, the dangers of a promiscuous sexual lifestyle, dealing with imminent death, and fighting for what’s right by doing something technically wrong, the film tackles them all manfully.

However, it does come at a cost. With over 100 f-words, and a large scattering of other vulgarity and profanity (s**t, c**ks**cker, g*dd**m, among others), the largely Texan character base, McConaughey in particular, does not hold back. There are four scenes of a sexual nature, although one is more implied and is valuable to the backstory (how Ron is infected), and these all involve topless women and implied sexual activity. There is a strip club involved on two occasions with graphic nudity, and a shot of male backside. Many of the characters seen are homosexual, and much of their lifestyle is strongly implied. There is a scene in a gay club where men and transsexuals dance provocatively.

GAY—What’s wrong with being gay? Answer

What about gays needs to change? Answer

The main characters consume copious amounts of drugs (mostly cocaine snorted or injected), alcohol and cigarettes throughout the film. As the main theme of the film is HIV AIDS, many people are seen at different stages of the virus—various stages of ill health, a heart attack, coughing up blood, injecting of medication and the results of unhealed wounds. Overall, the content is heavy and disturbing, at times. It’s difficult to watch, but nothing is glamorized or glorified. It is all key to the story, minus a couple sexual scenes, and helps plot out the path of the main character.

The Bible sets out what is wrong, and what is right. God laid out that sexual relations outside of marriage is sin, and will have consequences. This is proven through Ron’s contraction of HIV. Although this is a very serious, and ultimately fatal outcome, it does paint a strong and brutal picture of what can happen if we do not harness our emotions. Although Ron is straight, the majority of characters we see are homosexuals. Living in this lifestyle is one of the main reasons AIDS spread back in the 80s and left the world in a state of shock.

There is severe homophobia in this film, and strong rejection and hatred. God loves every single one of us, no matter what. He desires a relationship with us, and to guide us towards living through his perfection and his purity. His ultimate love is what each of these characters are looking for.

Ron Woodruff is not a church-going man. However, in desperation, it is always interesting to see how people react. There is a very touching scene where Ron, in utter despair prays out loud to God, begging to have another chance. The camera then zooms out, and we realize he’s sitting at the bar in the strip club. It’s a fascinating portrayal of the vulnerability and fragile outlook of human beings and something that is probed brilliantly all the way through the film.

Overall, this is certainly not a film for children or young people. Its strong content is targeted at adults. However, I am not offended directly by this film. It portrays people living a life of sin, but trying to make up for it when time is short. The bond between the two main characters grows and develops until it holds the audience captive—desperate for them to find a way out, and to have hope that there is something better waiting for them, even when life ends. That hope is never realized in this movie. It is still, a very powerful message to believers, that we cannot, and SHOULD not reject people because of the way they live. Everyone is crying out for Christ and His salvation, and it is our job to present that to them in the loving way we had it presented to us.

“Dallas Buyers Club” is a brilliant and moving film. The actors portray the characters with such reality, the script is raw and unwavering, and this is Matthew McConaughey’s turning point into serious acting. This is a real role, and a real film, and should inspire many to reach out to those hurting around them, while standing firm against sinful behavior and bad decisions, and urging repentance and acceptance of God’s gracious offer of salvation through our Savior Jesus Christ.

Are YOU going to Heaven when you die? Are you SURE you know the answer this extremely important question? Or have you made some common wrong assumptions? Find out now!…

Positive
Positive—I have watched two thirds of the film and am amazed at how much I see God and Jesus in Ron Woodroof’s story. Jesus dwelt in the midst of “sinners”. God has used “sinners” of the most depraved kind to bring his love, comfort wisdom and healing to the world. Through the depraved, imperfect and terminally-ill Ron Woodroof, God brought countless marginalized, reviled sick and forgotten men and women hope and comfort. These were people even Woodroof would not have associated with before he was sick.

Doctors, researchers, FDA, etc. were the Pharisees and Sadducees blindly stuck in their interpretation of proper procedure, health “care” and law. Alas, Ron Woodroof thought he was in it for the money and to save his own skin. I, the willing disciple, would only hope that God would call me like that and that I would go. Although I would like to believe otherwise, I am not so sure I would if there truly was nothing in it for me.
My Ratings: Moral rating: Offensive / Moviemaking quality: 5

Sally, age 48 (USA)
Negative
Negative—I chose to watch this movie as it is based on a true story, and I am intrigued by human interest stories and quite frankly all the awards buzz around this movie. I watched this movie with two of my friends who are lesbians. As a Christian, I am offended by many things in this movie and wish I had read the review before committing to watching this movie with friends. Beyond all the sex scenes and nudity, the most offensive to me was the use of God’s name in vain throughout this movie, including several G… d…mn and a few Jesus… F’… Christ. Normally if I were at a movie or at home, I would have walked out for that alone.

I was, however, touched by the performances and the development of compassion for those suffering with addictions, AIDS and those living this lifestyle.
My Ratings: Moral rating: Extremely Offensive / Moviemaking quality: 4

Wini, age 48 (USA)
Negative—…This movie has no redeeming qualities; it is pure propaganda. It doesn’t surprise me that America is in the state it’s in. I am just glad I am not an American, because clearly your time is finished.
My Ratings: Moral rating: Extremely Offensive / Moviemaking quality: 5

Steve, age 32 (Australia)
Negative—This movie is just pure pro homosexual propaganda. It’s hard to finish it, because of how awful it is. It’s better just to read the ending on-line. It is no surprise that God’s name is used in vain throughout. There is no point to this movie. It’s not entertaining, nor do we get any value or morals from it. …this movie victimized homosexuals in order to push their lifestyle as acceptable. The movie attacked those that disagree with homosexuality. More Hollywood propaganda, it’s no surprise 2 stars got Oscars from this. Oscars are given many times based not on talent but on what agenda you push. Rating: F
My Ratings: Moral rating: Extremely Offensive / Moviemaking quality: ½

Sam, age 28 (USA)
Movie Critics
…Matthew McConaughey’s career resurrection is in full bloom in “Dallas Buyers Club”. …an indelible story about one man’s unwillingness to go gently into that good night, and the personal growth he experiences along the way. [3½/4]

Marjorie Baumgarten, The Austin Chronicle
…The movie’s often touching and very watchable, but what gets you past the script’s sincere calculation is the growing sense of rage toward a medical-industrial complex that saw AIDS sufferers as guinea pigs and sources of profit. …

Ty Burr, The Boston Globe
…The empathy the film builds for individual human beings who are suffering and dying can only be seen as a good thing. But in embracing Ron’s and Rayon’s painful stories, we’re also asked to excuse and accept a slew of bad—sometimes illegal—decisions and actions, while staring wide-eyed at searingly seedy depictions of strip clubs and sexual encounters. …

Claudia Puig, USA Today
…Matthew McConaughey is in top form in this entertaining account of a rodeo redneck who becomes an unlikely angel in the AIDS struggle. …