for some mild sensuality, a scene of violence, and brief incidental language and smoking. 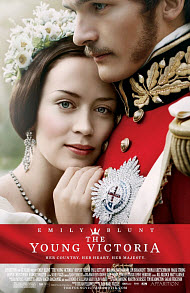 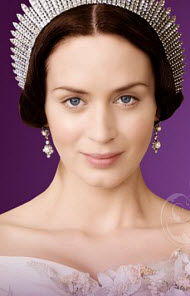 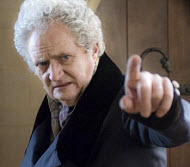 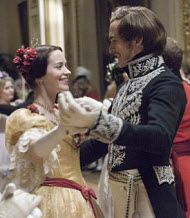 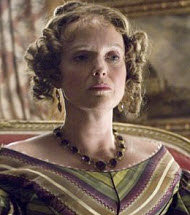 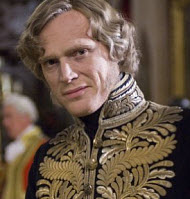 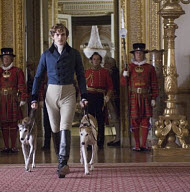 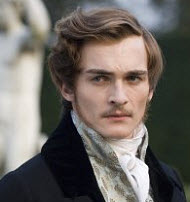 “Her country. Her Heart. Her majesty.”

Her full name was Alexandrina Victoria (Emily Blunt), and she was heir to the British throne at the tender age of eighteen. Victoria’s mother, the Duchess of Kent (Miranda Richardson), kept Victoria tightly cloistered from courtly influences from an early age. She hoped to mold her daughter into reflecting her own personal beliefs and not the beliefs of the current king. The Duchess' most trusted advisor, Sir John Conroy (Mark Strong), only encouraged this paranoid protection of the princess, nearly preventing her from attending King William’s (Jim Broadbent) birthday party, the last one of his life. Her life was pulled first one way and than another, decisions made for her. Even Prince Albert (Rupert Friend) was introduced to her from matrimonial hopes on the part of her Uncle Leopold (Thomas Kretschmann), King of Belgium. Despite the urgings of her mother and Sir John to sign over regency powers, Victoria stood strong. The morning after King William’s death, she was crowned Queen of England. Now Victoria must contend with the warring factions of the court and parliament, including the seductive nuances of Lord Melbourne’s (Paul Bettany) attempts to win her support. She finds herself quite alone, unable to trust her mother and certainly not Sir John Conroy. All Victoria can do is hope she makes the right decisions, one of them being to allow Prince Albert a permanent place in her life.

Many British films of a courtly nature overflow with unfortunate content. “The Duchess” or “Marie Antoinette” are good examples of a great idea gone horribly wrong. Not so in “The Young Victoria.” While there is some content, I was pleasantly surprised at its cleanliness. A few instances of violence do intrude, but nothing extreme. Victoria is manhandled as a young lady by Sir John Conroy. This, of course, makes her very uneasy in his presence throughout the rest of the film. A young man takes a bullet for another individual. An angry mob gathers outside Buckingham Palace at one point, hurling stones and breaking windows. Victoria herself even throws a few tantrums, either at her mother or once at Prince Albert for what she saw as his interference in her affairs.

Deceit plays a large role in “The Young Victoria.” You cannot have politics without politicians. Unfortunately, Victoria makes some very poor and petty choices in this film, but, more importantly, she learns from those mistakes.

There is one scene of sexual content between Albert and Victoria on their wedding night, but it is kept very low key with no nudity. Of course, since they are newlyweds, there is much kissing in several different scenes. Sexual innuendos are kept to a minimum, but they are still present, especially when Prince Albert is being forced to ingratiate himself to the queen. In all honesty, any sexual content is presented within the boundary of marriage, and it is definitely not extreme or graphic. I was pleasantly surprised with the low-key presentation of any sexual content.

It cannot be an easy thing to rule a country, even as a figurehead. The individuals in Victoria’s life tried their hardest to stifle her spirit. But Victoria remained strong. She never allowed herself to be pushed to the point of hopelessness. She knew that something better was just around the corner. Victoria learns to trust in this film. She thought she could handle the crisis alone, only to discover that she couldn’t. But instead of thoroughly trusting the politicians near her, she chose instead to put faith in her husband. Her realization of Albert’s usefulness was slow in coming. But once it did come, Victoria did not waste time. He was the man she went to for counsel, bringing their marriage even closer together. This is a positive film about how true love can spring from adversity. I wish Victoria had been a religious person, but this film does not depict her faith. Withstanding the storms of life is made better when Christ stands at your side. Her ground would not have shifted so much had she been aware that Christ is the solid rock, a firm foundation against shifting sand.

I know next to nothing about this historical era. I understand that a few alterations were made for filmography’s sake. But I also understand that “The Young Victoria” impressed me more than I ever expected and definitely peaked my interest to learn more about her. The entire film was presented in such a way as to make any viewer curious about Victoria’s real life experiences. The cinematography is stunning, as are the costumes. The entire cast delivered stellar performances, particularly Emily Blunt. I had no idea she was capable of acting on par with Helen Mirren in “The Queen.” Of course, you cannot go wrong with Jim Broadbent, Miranda Richardson, or Paul Bettany. Believe me, if you have any interest at all in British royalty, this film is a perfect place to start. In a word, I loved it.

Positive
Positive—What an outstandingly-made film. The acting was superb, character development, so lacking today in a lot of films, was such that you almost instantly cared about the Victoria and Albert characters. My wife and I did not want it to end. Perhaps another movie might be made examining the growth of Victoria and Albert’s love affair and the “Victorian” age that began, along with it’s often ridiculed morals. I would recommend this movie without reservation to any of my Christian and non-Christian friends. My wife and I left the theater with no regrets and no wishing that the filmmaker had done one thing or another differently. We came out saying, “They got it right.”
My Ratings: Moral rating: Excellent! / Moviemaking quality: 5

Michael G, age 52 (USA)
Positive—I found this to be a thought-provoking, very interesting movie about the life of a monarch. The complexities of life within the English monarchy were clearly depicted and lavishly presented. I knew that Emily Blunt is an accomplished actress, so I was not surprised to see her nuanced performance. All other actors did well in a clearly stated story, with beautiful filming. I now do want to learn more about this remarkable woman.
My Ratings: Moral rating: Better than Average / Moviemaking quality: 4½

Halyna Barannik, age 63 (USA)
Positive—With every movie, people go to see it with certain expectations… and what a wonderful reward when the movie not only meets the audience’s expectations, but exceeds them. That is how I felt upon seeing “The Young Victoria” for the first time. From seeing the trailer and knowing of its PG rating, it looked to be promising. And it was! It is true that “The Young Victoria” is not 100% historically accurate. Also, I would not recommend this film to young children… due to the fact that most of the plot would go right over their heads. There is a small amount of violent content (a shooting, riot, shouting, etc). I must give kudos to the producers and cast for how they handle the romance between Victoria and Albert (nothing is consummated until after marriage and even then it is tactfully implied). Some other points that the film made which are worthy of mention are:

2) Be aware of who you take counsel from

3) What natural influences do you have around you

4) Have courage no matter what age or circumstances

Other aspects such as music, photography, acting, casting, etc. are all very well done. A wonderful glimpse into the early years of the longest ruling monarch in England; before the era was named “Victorian;” before Albert’s untimely death; and before Victoria continued to rule for 40 more years… alone. I will definitely be buying this when it is released on DVD!
My Ratings: Moral rating: Better than Average / Moviemaking quality: 4

Cara, age 23 (USA)
Positive—I loved this film. It’s short but it’s incredibly well-made and well produced. “The Young Victoria” covers the brief period between Victoria’s ascension to the British crown and her marriage to her cousin, Prince Albert of Saxe-Coburg. Although there is some mild sensuality, it’s not graphic and it’s in good taste. There is no other objectionable content that I could see from this movie. As a fan of period drama, I enjoyed watching it. I enjoyed Emily Blunt’s performance as the young princess turned queen. I also feel that she was robbed of a best acting Oscar; her role was played beautifully. In my opinion, “The Young Victoria” is a great film and a slightly better film than the A&E production, “Victoria and Albert.”
My Ratings: Moral rating: Better than Average / Moviemaking quality: 4½

Shannon H., age 28 (USA)
Positive—I really enjoyed this movie! I thought it told the story of Queen Victoria very well, and I liked learning about her, and Prince Albert. I thought their relationship was very sweet, and I appreciated the fact that even if there are about 2 scenes of sensuality, they kept it very clean. The only thing I didn’t understand at times was how she treated her mother. However, this does get somewhat resolved as the film goes on. If you like romances, and also learning about history, then you will like this one! I wouldn’t say that it is a film for children though. Maybe okay for kids 13+
My Ratings: Moral rating: Better than Average / Moviemaking quality: 4½

Sarah, age 26 (USA)
Positive—Wonderful movie! My favorite of the year! I loved learning about Queen Victoria of England, and was surprised at how accurate it was. Very clean, wonderful visuals, and a beautiful love story that made me cry.

Marriage is honored in this movie, and it shows the young couple working through problems, remaining faithful, and the legacy that they passed on to their country. Also, the message of being careful who you receive advice from is excellent. I rate this a top movie—especially Christians who want a good message for themselves and/or their children!

One side note: I learned after the movie that after Victoria’s husband died, she wore black for the rest of her life to remember him. Their love for each other was very evident to others!
My Ratings: Moral rating: Excellent! / Moviemaking quality: 5

Sylvia, age 27 (USA)
Positive—Absolutely beautiful story of perseverance and justice. I recommend it for everyone.
My Ratings: Moral rating: Good / Moviemaking quality: 5

Comments from young people
Positive—A very superior example of filmmaking. This is the first movie that I’ve seen in quite some time that didn’t offend me in several ways. I thought it was a beautiful cinematic achievement, and I highly recommend it.
My Ratings: Moral rating: Better than Average / Moviemaking quality: 5