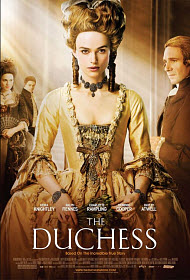 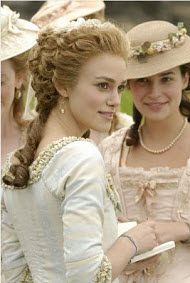 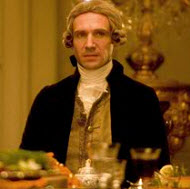 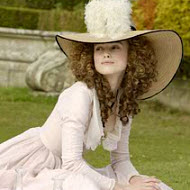 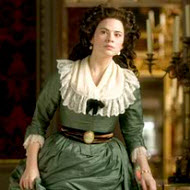 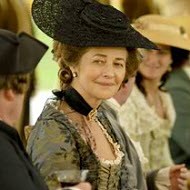 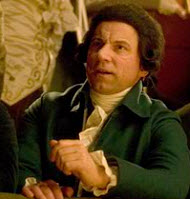 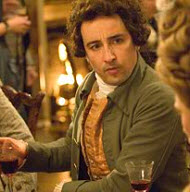 Apparel in the Bible

“There were three people in her marriage. / Based on the incredible true story.”

This film is based on the book Georgiana. Duchess of Devonshire by Amanda Foreman

“The Duchess” is based on Amanda Foreman’s popular biography of Georgiana Spencer who at the age of seventeen married the fifth Duke of Devonshire in 1774. Though the movie doesn’t do her justice, Georgiana was a parlor room prodigy, captivating the Paris social scene at the age of fourteen with her elegance, grace, and poise.

The movie begins with Georgiana (Kiera Knightley) playing on the lawn with other young people while her mother and the Duke are inside negotiating the marriage instruments. The role of the Duke is beautifully under-acted by Ralph Fiennes who carries every scene he’s in. Regrettably, Kiera Knightley has not yet aged enough to acquire a natural gravitas, and so she’s forced to act as if she’s more sophisticated, an unconvincing attempt since she smirks with all the mannerisms of her past roles as a rebellious ingénue.

The movie is true to many of the details of the biography, quoting entire statements from the letters and accurately portraying the tiny wedding (five people attending). Unfortunately, the movie takes liberties as well and shows the Duke forcing himself on Georgiana on their wedding night in a brutish manner. Later, he is shown raping her, which the Duke, for all his faults, would not have done. The historical Duke was a formal man, not a brutal one, and was extremely forgiving of Georgiana in the latter stages of their marriage after her own affairs, illegitimate child, and millions of dollars in gambling debts made her a target of bitter criticism from lenders and society matrons alike. But these are the kinds of details that the filmmakers did not wish the viewer to know and the movie, predictably, suffers from an hagiographic approach which tries to make her a proto-feminist wunderkind. In fact, she was profoundly conventional: drinking, gambling, and committing adultery with the best of them.

The premise of the movie is that the Duke marries Georgiana with the understanding that she will provide him an heir. As time passes and she does not do so, he takes Georgiana’s best friend, Lady Elizabeth Foster, as a mistress to satisfy his sexual desire. This causes a deep rupture between Georgiana and the two of them which does not heal until they make amends. Lady Elizabeth soon moves into the house with them and they all three live in an uneasy ménage a trois in which Lady Elizabeth gets all the love and the Duchess all the money.

The film glosses over her life-long gambling addiction, but it does show some of her historic politicking. Although her mother, Lady Spencer, herself often went on the stump to politick, the Duchess became famous (and infamous) for the extent and intimacy of her glad-handing, reputedly allowing commoners to give her a peck on the cheek. She was instrumental in the elections of 1784 and her role as an influential Whig power-broker lasted for the better part of two decades.

Her relationship with Lady Elizabeth Foster in the movie is a complex one, and Foster herself is portrayed better than she was in life. Foreman claims she betrayed Georgiana after her death by burning many of the letters which would have shown Georgiana in a good light and preserving incriminating ones that showed her badly. Since she was sleeping with the Duke for years, Foster was hardly an innocent bystander. Compounding this self-interest, she was also trying to look out for her children’s future and accomplished that by becoming the next Duchess of Devonshire.

But the movie doesn’t show any of that. Instead, as in the recent remake of The Women, the central relationship in the movie is between two women, Georgiana and Lady Elizabeth, focusing on the special bond between them in a cruel man’s world. The feminist propaganda is taken to extreme in a scene where Foster tells Georgiana to pretend it is Grey caressing her as she kisses her neck, her bare back, and fondles her to the point of orgasm. It is a disgusting scene which I regret having to describe and yet it is so. Sex, whether with men or women outside of marriage is always good while, in accordance with Andrea Dworkin’s famous statement, “marriage is rape.” It’s a standard feminist formulation that’s beyond tiresome since one sees it in some form or other in so many movies. Barbara Klinger, a Marxist feminist film critic, explained way back in 1984 that “progressive” films “explode the myth of the happy, unproblematic founding unit of the family.” From the 1920s until now, the culture of Hollywood has always been anti-marriage, anti-family, and anti-religion.

What’s ironic about Georgiana’s portrayal is that it leaves out the Christian part. Both she and her mother were devout Christians who struggled bitterly with the sin of gambling throughout their entire lives. Were it not for her gambling vice, Georgiana might not have had such a tragic life since the huge debts compelled her to lie, default on payments, borrow on false pretences, and perhaps even to exchange sexual favors as has been documented of the time in Foreman’s own book. She was deep in debt many times, and on at least two separate occasions, she owed the equivalent of millions of dollars. Unlike the debt owed to tradesmen which the nobility sometimes never paid, “debts of honor” had to be paid. The consequence of not paying was complete humiliation which caused people to commit suicide or leave England forever rather than endure.

Writing in her diary, Lady Spencer prayed: “Enable me O God to persevere in my endeavour to conquer this habit as far as it is a vice.” Regarding Georgiana’s addiction, her mother wrote her: “Pray sincerely to God that he would for Jesus Christ’s sake give his assistance without which you must not hope to do anything.” Georgiana herself, three weeks before her death, wrote to her son: “All that I have seen never weakn’d my principles to devotion to almighty God or took from my love of virtue and my humble wishes to do what is right.” Given the evidence of her life, she did not practice what she preached.

Hollywood portrays her life as a romance. In reality, it was a tragedy. Both Georgiana and her mother were Christians, and how much more uplifting a movie it would have been had they been portrayed as such: struggling with sin all their lives, failing too often, but overcoming their vice in the end. If their words are to be believed, both held on to the hope of eternal life that their faith promised them.

As usual, Hollywood left the better story on the cutting room floor and tried to fill out the empty spaces with salacious sexuality and second-rate fictions of its own creation. Needless, to say, the movie is not appropriate for a Christian audience and contains sexual activity, female nudity, and suggestions of lesbian sex. I don’t think Georgiana would have approved.

Positive—This movie displayed very well the lifestyles of the era the filmmakers were depicting. The acting was very well, and Kiera Knightely did a superb job playing her role. A very talented actress! While this movie was making a vivid point of the “Dutchess” abuse she suffered within her marriage there is much “sexual” content within the film. While they may show only once “full” body shot of sex displayed with her “true” love, there are at least two more instances in the film of rape being committed such as sound effects etc. … which in my viewpoint is still considered offensive whether they show it or not. If you can get past the sexual content and look at the viewpoint seen through the Dutchess’ eyes and the point being made that the Duke was after anyone and everyone that could give him satisfaction, I would reccomend this movie for “mature” audiences. It is an interesting movie, historically wise, and grips your heart at what this poor woman went through.
My Ratings: Moral rating: Average / Moviemaking quality: 4½

Whitley, age 20 (USA)
Positive—In spite of its excellent artistic quality, I cannot recommend this film to Christians because of the explicit sexual content, which included rape, homosexuality, and adultery; and because it makes adultery seem justifiable. The film should have been rated R for this reason, so think twice before allowing your young teen to see it.

The duchess of Devonshire is portrayed as the victim of a cruel, loveless marriage in which she is a virtual prisoner, while her husband carries on a decades-long affair with her live-in best friend. These circumstances drive her to the arms of another man, Charles Grey, and naturally cause the viewer to applaud her choice. But adultery, though understandable in this case, is still wrong in God's eyes, and should be wrong in ours as well.

I can comment only on the characters portrayed in this movie, rather than on the historic duchess of Devonshire, but the movie does highlight a very real problem in 18th century marriages, the treatment of women as their husband's property. This is not what Christ intends in a marriage, and I am thankful to live in an era where the law recognizes that women are of equal worth to men, and where we have some legal protection from violence in marriage, although we certainly have far to go.
My Ratings: Moral rating: Offensive / Moviemaking quality: 4

Ashley, age 45 (USA)
Movie Critics
…A work of art. Simply a stunning cinematic conception. Like classics of old that either accidentally or magically found their filmmaking elements coming together like a perfect recipe, writers William Nicholson and Michael Hirst, director Shekhar Kapur, and all the artists and technicians involved in this production have given moviegoers an exceptional evening’s entertainment. …

Phil Boatwright, Preview Family Movie and TV Review
…director Saul Dibb's undeniably enjoyable movie is willing to subvert some of the clichés of the standard Hollywood period drama. Yet for a number of reasons ‘The Duchess’ isn't all it could have been. It's fun, but falls short of fabulous. …

David Ansen, Newsweek
…Knightley does the best she can to enliven such thin Masterpiece Theatre material, but eventually, the sheer emptiness of the pageantry wears her—and us—out. Only Fiennes comes out smelling like an English rose, turning the duke into one of his signature upper-crust reptiles. …

David Fear, Time Out New York
…Eye candy at its 18th-century best… Fiennes and Knightley are exceptional in their roles and Dibb proves himself ably in his first big-budget flick. But the Diana focus does The Duchess a disservice. She should have been left to stand on her own merit.

Linda Barnard, Toronto Star
…a chick flick with anger issues. … ‘I Married an Ass’ might be a more bluntly accurate title for this feminist portrait of a pre-pre-feminist misalliance. Keira Knightley, today’s reigning queen of the costume drama, is radiant in the title role, despite all the angst. …

Kevin Lally, Film Journal International
…‘The Duchess’ wants you to pity Georgiana while also indulging in every luscious detail of her captivity. She may have a pimp for a mother and a bore for a husband, but just look at those verdant landscapes dotted with grazing sheep (no grubbing peasants), the fabulously ornamented gowns, leaning towers of wigs, palatial digs and troops of silent servants. (It’s period-lifestyle pornography.)…