for intense sequences of violence and action, brief strong language, smoking and a scene of teen drinking. 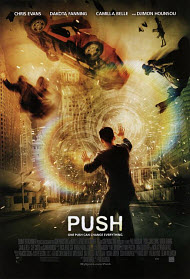 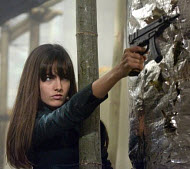 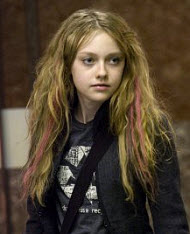 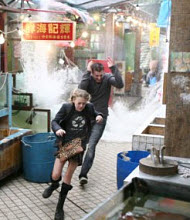 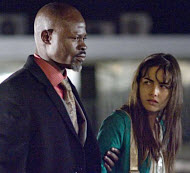 MURDER in the Bible

Before the film begins, Dakota Fanning’s monologue quickly helps elevate the momentum for “Push.” She educates the viewer of the discrimination her kind has suffered. If one adds the theatrical trailers to the equation, the film seemingly promises a high-action ride and an unique twist to an already well-used plot. While “Push” does begin strongly, its loopholes and unsatisfactory ending eventually botch the film.

Fanning plays Cassie, who’s a psychic with the ability to foretell the future; people like her are called watchers. She explains how inhumane experimentation on psychics began during World War II in hopes of creating a super solider. After the war, governments created divisions to continue the testing on psychics. Ever since, the Division has mercilessly tracked down psychics for experimenting. The one problem this program keeps encountering is that all psychics end up dying after being injected. All changes when Kira Hudson (Camilla Belle) survives the injection and manages to escape with the remaining dosages. A massive manhunt begins throughout Hong Kong to find the Division’s one hope.

Nick (Chris Evans) was only ten years old when his father urgently told him that in the future a girl would come to him with a flower. When she did, Nick would have to help her since the survival of their kind depended on this. Hiding his son, his father is soon killed by Division Agent Henry Carver (Djimon Hounsou). Ten years past, Nick is now living in seclusion in Hong Kong until Cassie knocks on his door and explains how he was in her vision. Together they try to find Kira and the drug before the Division can.

While this movie isn’t as a big of a disappointment as last year’s “Jumper,” it does leave behind its own ample amount of unanswered questions. What exactly is the injection? Why doesn’t the government just use the psychics as they are instead of killing them off for the past 60+ years? The list of questions is long and for the sake of space, I’ll leave it be. However, the latter question makes the entire basis of the movie rather silly since the psychics shown appear to be extremely powerful and nearly unstoppable.

The movie introduces several different kind of psychics. The bleeders scream with their mouths wide open, causing people’s insides to bleed. Watchers draw countless pictures since the future’s constantly changing based on people’s intentions. Movers, such as Nick, are able to move different objects. Kira and Division Agent Carver are pushers with the ability to alter people’s thoughts and create false memories.

Perhaps what caused the biggest disappointment was the movie’s stale plot. After Nick’s father is murdered, one might wait anxiously for the girl to deliver the flower. The audience is informed early on of her identity and perhaps all the suspense was taken with that. The plot then became searching for the suitcase Kira had hidden with the stolen drug. The finding of a suitcase is a thin plotline at best, and the filmmakers lengthened the search by inserting multiple fight scenes with the same psychics and an undeveloped love story.

While both talented, the chemistry between Chris Evans and Camille Belle was never convincing. The director tempted to create a tender moment at the end by zooming unusually close to Evan’s bloody face and Belle’s flawless face. The outright difference of their faces doesn’t produce tenderness, save the stark reminder of how much Evan’s character had to painfully endure before finally reaching his girl.

The movie has plenty of offensive violence, but surprisingly low in the sexual and profanity area. God’s name is profaned a few times throughout the film, and I heard about ten other profanities, including one GD. Kira and Nick do share a couple of kisses, and his hand briefly touches her derriere. Cassie’s skirts are rather short, and there is one scene of her getting drunk in desperation to see clearer visions. It never shows her actually drinking the alcohol, and she falls asleep quickly soon afterwards.

Violence is constant throughout and should be expected since there is a manhunt for Kira. Some women are shown beaten in the film. Kira is slapped and punched, and an evil watcher is slapped by her father. There are several fistfights where blood is generously shown. While the bleeders are screaming, fish are shown bursting, and many people writhe in agony while their ears bled. There are several deaths and shootings. Several people are coerced into committing suicide by pushers. Finally, a man is shown impaled by a stick in his face.

All throughout the movie, the characters worried about the future, even obsessing over it. They tried their best to alter future events. They found that the future was based on their intentions and in a continual state of change. Personally, I feel so safe and relieved that the Lord’s plan of salvation has remained unchanged since before the beginning of time to Jesus’ death and resurrection. Now, waiting for His return, I have no doubt that the events of Revelation will occur exactly as written.

When Cassie was told that she would be killed by a tiger, she became frightened and haunted by the thought. Since God didn’t exist in their world, they were understandably frightened, since they were utterly alone in their existence. In Luke 12:4, Jesus said, “I tell you friends, do not be afraid of those who kill the body and after that can do no more.” In this brevity of life, we should not waste precious minutes with worry, but remain fully confident in Christ. For He did say, “Therefore I tell you, do not worry about your life, what you will eat; or about your body, what you will wear.”

[Fear, Anxiety and Worry… What does the Bible say? Answer]

I personally do not recommend the film. There are better films with similar plots that provide cleaner and better entertainment. In addition, this film does not offer any morale, closure, or most importantly any answers. Much hype was made of Cassie’s mom being the greatest watcher of all time. No introduction was ever made, although heavily hinted that there would be. The film ended with a somewhat indecision of what the next step would be. While I understand that not all movies, like life, end neatly with a perfectly tied bow, the film’s long run was wasted on the same screamers, pushers, and watchers’ fighting, instead of answering at least a few questions.

Neutral
Neutral—I went to this movie really excited to see it. I was a little disappointed at the thin plot and weak love connection between two of the main characters, but I actually really liked. It left me with a lot of unanswered questions, so I hope they make another one. The violence was, at times, a little extreme for a PG-13 movie, but nothing TOO horrible. The language wasn’t too bad and there was hardly any sensual content. It bothered me a little that Dakota Fanning, being so young, cussed a few times. All in all, it was a decent movie.
My Ratings: Moral rating: Better than Average / Moviemaking quality: 4

Birdee, age 22 (USA)
Negative
Negative—This was honestly the dumbest movie I have ever seen, don’t waste your time. I love Dakota Fanning and thought we would give it a try. It was so boring and just seemed to keep going on and on and on and on. I wish I wouldn’t have even thought about getting it. Many times I like movies that the critics give bad reviews to, but I also go here first, and there wasn’t that many comments, so we went for it. Bad choice, stupid, stupid, stupid!
My Ratings: Moral rating: Offensive / Moviemaking quality: ½

Samantha, age 34 (USA)
Negative—I liked the plot and story—it kept you on your toes, and the character development was really encouraging. It was really a great movie except for one issue I had with it. The aspect that frustrated me specifically and disturbed me afterwards was that the “powers” of the various people in the movie are labeled as psychic abilities that are caused by psycological/scientific/or DNA related anomolies; however, most of those same abilities or powers in the real world are expressions of the occult. The way characters' eyes changed when they used their powers, the ability to move things, predict the future, or speak thoughts or memories into people’s minds are terribly reminicent of Satanic and Occultic “powers” and divinations.

In truth, these are demonic expressions that people in occultic bondage are decieved into considering as their own powers. Although the movie tried to portray these abilities as a genetic or psycological anomolies, they were rather unlike X-Men powers. For this reason, I disliked the movie; I felt like it presented these “abilities” in the wrong light and perhaps inadvertently encouraged persons to appreciate such “powers”. The devil and his demons have power, but Jesus is God. He reigns; He is and will be victorious—through His love and power, through His blood and His name.
My Ratings: Moral rating: Average / Moviemaking quality: 4

Blake, age 20 (USA)
Comments from young people
Negative—I hated this movie. The special effects were pretty weak, the acting was wooden, save for Dakota Fanning’s part, and it was very hard to follow. The plot is full of holes, and the ending was horrible. As far as offensive content goes, the violence is pretty hard for a PG-13, and there is some but not a lot of language. It’s clean enough for most 13 year olds to handle, but I wouldn’t recommend it for something entertaining.
My Ratings: Moral rating: Average / Moviemaking quality: 1½

Linda, age 17 (USA)
Positive—This movie was better and cleaner than most out there. While there was an insinuated sex scene, it wasn’t so strong to be a stumbling block to most. The acting seemed well done, well done enough for me not to be questioning it. I wasn’t sitting there nit-picking it, which tells me something—I was interested. The plot was intriguing, and the time jumps and future seeing was, at times possibly confusing, but made it especially interesting. They did a good job of making the world they created revolve more around the special abilities these certain people have than anything else.

The story line, was, perhaps, a bit lacking. As in, they are all searching for a certain drug that “division” is after, but no one in the audience really cares about that drug because they don’t understand it. The plot twists were well done, and though they left your mind stumbling for answers, you receive the answer at the end of the film. This movie requires a sequel, which I did not expect at all, so when it ended rather abruptly, I was a bit disappointed. Go see it expecting a cliff hanger. What the critique above said was right, the young girl gets drunk and acts a bit rude. There is plenty of questionable content in this film, but compared to most I’ve seen, it’s pretty clean.
My Ratings: Moral rating: Average / Moviemaking quality: 4½

Jennifer, age 16 (USA)
Positive—When I saw it I wasn’t expecting very much, but, when it finished, I was pretty happy. I read the other negative comments, and to reply to those that say that the violence in the movie should have been more than PG-13, I guess that you have not seen many movies like that, or you would rethink the comment. Although the lines were cheesy at times, I don’t think there is anything that demotes our Christian beliefs. That’s it, hope the review helps.
My Ratings: Moral rating: Good / Moviemaking quality: 4½