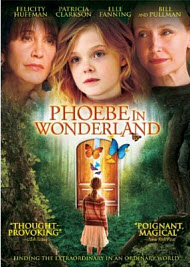 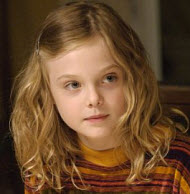 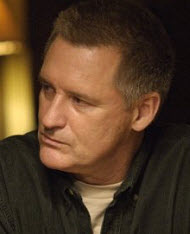 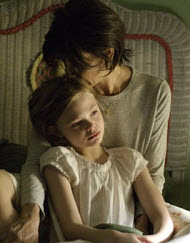 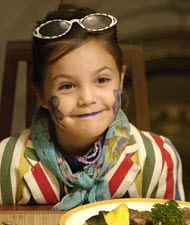 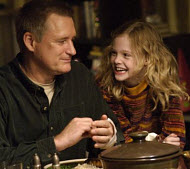 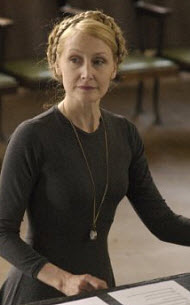 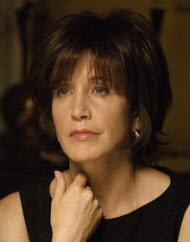 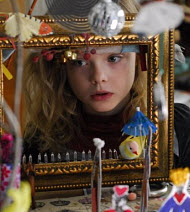 “Dare to dream your life.”

“Phoebe In Wonderland” deals not only with the inner workings of an emotional and creative family, how adults interact with children, and the complexities of how human beings deal with life situations on many different levels, but focuses on a subject most people have never had to face and that is identifying and coping with Tourette’s Syndrome.

A film that has won many awards including those at The Sundance Film Festival, “Phoebe In Wonderland” entertains us on all levels while looking out the eyes of a ten year old girl (Elle Fanning), who seems to be way too caught up in her world of fantasy. Her writer parents, Hillary (Felicity Huffman) and Peter (Bill Pullman) Lichten are not only striving to succeed in their careers, but are dealing with the stress of marriage and parenting. At first, this sounds like a “formula” film, but it is most definitely not. The performances by all the talented actors in this film give it a weight and sensitivity that warrants your view.

Phoebe is a loved and nurtured child who has many emerging odd little quirks, such as talking to people who just aren’t there, spitting at inopportune times, blurting out words she can’t seem to contain, and jumping a certain number of times before she can do anything else. This behavior is so subtle that her family passes it off as the offshoot of being a creative and intelligent child. She is a bit withdrawn and a tad insecure which makes it hard for her to forge friends, but does have a sweet and giving spirit.

Where Phoebe does seem to excel brilliantly is in her ability to act. This leads her to try out for the much coveted part of Alice in the school production of “Alice In Wonderland.” The eccentric school drama teacher, Miss Dodger (Patricia Clarkson) sees in Phoebe something no one else does and encourages not only her, but her entire drama class to do things on their own. To experiment and feel special at their personal, as well as group, accomplishments.

Through the course of the film, Phoebe, her parents, her little sister Olivia (Bailee Madison), the teachers including the school Principal (Campbell Scott) and her best friend Jamie (Ian Collette) go through an array of painful, emotional and thought provoking life situations that allow the characters to express life themes that we all have to learn to deal with. Some are answered and others are left for us, as the audience, to come to our own personal conclusions. “Phoebe In Wonderland” was designed to allow us to explore not just the trauma of having Tourette’s Syndrome and how it affects the child, the family and others close to her, but on a more specific level, who we are in this world and the inner workings of the mind, heart and spirit.

So as not to run you through the entire script, I encourage you to see this film with your family and to discuss the workings of how we deal with our problems, how we all use “rules” to our advantage, and sometimes over use them to the point of losing sight of the real problems we encounter, and how God would have given the ultimate best answers to some of the tough life experiences the characters had to deal with—over and above the obvious challenges of discovering and dealing with Tourette’s Syndrome.

The entire film has no swear words, except one small point where the mother uses the F-word, and I must say it was not needed. Sometimes I think it is thrown in there just because all the other movies have it somewhere. It was totally out of place for the character, as well.

There is no nudity or even kissing except for family hugs and kisses on a normal level. The Lichten family is shown to be loving, caring and giving in a very candid way, and all performances are outstanding and believable.

The nine year old male character of Jamie expresses an interest in playing the Queen of Hearts, instead of the more traditional role of King. The kids taunt him and tease him, calling him a fruitcake and pasting the word faggot across his costume. It is never said he is gay, but the issue of being tolerant and knowing what you are doing when you say mean and hateful things is treated in a stern but loving way by the character of Miss Dodger. Taking the time to teach the children “why” one does not treat another person in such a way so that they understand their motives are wrong and hurtful, rather than just yelling “don’t,” without giving a reason for the punishment, was a relevant lesson for us all. Learning to be patient with kids and directing them, rather than pushing them, to do things they might not understand, is a kudo and is needed in this extremely family-oriented film.

The father tries to give sage advice to his children, encouraging them to think before they act, and stating we all must choose to act and say the best things during our lifetime, so to choose wisely. The film explores the pluses to actually taking the time to sit and listen to one another, to take the time to do that, no matter what your age or station in life. By actually listening and expressing to one another, we all can learn to help each other and uncover and deal with life’s problems. These are all a plus in this film.

The very evident minus for the Christian family who views this film is the absence of God. In fact, the kids, who may just be too young to understand who God is, say they don’t believe in Him, although the Jamie character encourages the Phoebe character to pray. “When you have something you want a lot, you pray… I prayed for a part in a play, and I got it, so it must work.” The family, when they notice that Phoebe has a problem, instead of turning to God for guidance use a child psychologist as a comfort and answer to their dilemma. The story does elude to the fact he isn’t much of a help, but at the same time gives the credit to the intelligence of the Mother who goes to books to uncover that the symptoms Phoebe displays are that of Tourette’s.

Romans gives us a beautiful description and encourages us that God is all knowing, and the answers He provides will never fail. His knowledge far exceeds any we can claim for ourselves. The beauty of it is so simple, too. All we have to do is crack open the One Book known simply as The Bible. We need not scour over tons of pages of millions of books man has written. The eternal answers to every question are there in His Word. Romans 11:33 says:

“Oh, the depth of the riches both of the wisdom and knowledge of God! How unsearchable are His judgments and His ways past finding out!”

The Greek word for “depth” here is bathos, which means: “inconceivable profundity, unthinkable thoughts.” If only the whole world would turn to this simple truth, how much uncertainty, pain and suffering would be wiped clean and erased away is almost unfathomable to the finite human mind. We humans seem to always think something so simple couldn’t possibly be right, but the true beauty is, that it is.

God’s wisdom and knowledge are deep, they are inexhaustible. God knows everything and applies it perfectly. If only the Lichten family knew this, they would have saved themselves much heartache and had most of their deepest questions answered.

But in all, the journey of this little family and the personal way we see and are allowed to feel the confusion and wonder of someone experiencing Tourette’s through the eyes of a child in “Phoebe In Wonderland” is something one cannot ignore. For children, it is a movie that parents can use to help them understand other’s conduct and perhaps help them along, instead of make fun of their behavior.

One thing missing on the DVD is a feature they should have included explaining Tourette’s Syndrome and the inspiration for the writing of this very beautiful, often painful, yet uplifting, and thought provoking story. Phoebe herself explains her inner feelings to her classmates after she knows what she has, “It’s a voice in your head that makes you do the opposite of what you want to do. It makes you break rules you do not want to break.”

The exact cause of Tourette’s is unknown, but it has been established that both genetic and environmental factors are involved. There are no tests that are conclusive in identifying it, there is no set diagnosis accept to watch a person’s behavior, and it is not life threatening.

“Phoebe In Wonderland” is a sweet, touching drama that helps us focus on the fact we need to give patience and attention to those we love. Keeping in touch with God through His word on a daily basis is paramount, in order to identify problems like these and ease worries long before they become painful emotional wounds to the heart and spirit.

Comments from young people
Neutral—I would just like to say that this is not the “family movie” that the reviewer made it out to be. I think the PG-13 rating was well deserved, because of an f-word and a lot of mean bullying and name calling. Plus, I found some of the parts about the girl’s mental illness to be kind of disturbing. I did think the quality of the film was terrific, so I might recommend it to someone over the age of 15.
My Ratings: Moral rating: Better than Average / Moviemaking quality: 5