for sequences of violent action throughout, partial nudity and language 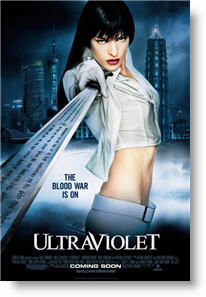 Despite the small statistical sampling reflected by those three opinions, such a passionate consensus indicates that there must be something desperately rotten in Denmark besides Lars Von Trier’s movies.

Practically speaking, the dialog and acting are just horrible. Wimmer scrapes the bottom of the casting bucket in selecting some actors who have only two credits in their filmography, and he doesn’t even bother to change the name of three of those people, allowing their characters to retain the names of the actors. Since one of his characters is named “Six” this may reflect Wimmer’s inability to invent fictional names. Be that as it may, the writing and the delivery are abysmal. This may also be attributed to the fact that Wimmer suffers from George Lucas syndrome in which he tries to do everything. In both “Ultraviolet” and “Equilibrium”, Wimmer is a triple-threat to good taste and common sense: writing, directing, and acting. [Memo to George Clooney and Kurt Wimmer: you are not Clint Eastwood.]

Cinematically, I’ve never seen such a sterile-looking movie. There’s nothing in it that looks authentic, although everything is supposed to. Its form, like its content, is full of empty spaces populated by CGI architectural elements masquerading, I believe, as people. Worse, the movie defies narrative logic. To paraphrase Gertrude Stein’s comment about Oakland, there is no montage there. The movie consists of disconnected scenes whose only common feature are the actors.

Kurt Wimmer established a small cult following with the movie “Equilibrium”, whose tagline is “In a future where freedom is outlawed outlaws will become heroes.” The anti-hero as savior is the one note that he beats relentlessly. My review of the movie (http://www.unomaha.edu/jrf/Vol7No2/reviews/equilibrium.htm) observes that “Equilibrium” uses a lexicon of “Cleric,” “Father,” “savior,” “faith,” and “true believer” to characterize the fascist guardians of religious sensibility who have banned emotion-inducing art, literature, and music.

Additionally, Wimmer uses a T-shaped cross to reinforce the idea that fascism and Christianity are ideologically identical, apparently ignorant of the fact that Germany’s National Socialist Party was the flip side of the Communist Socialist Worker’s Party. More to the point, Wimmer purposely ignores the common dependency of Marxism and Nazism on propaganda as a medium, or their dependency on concentration camps as a mode of economic production. But why let facts get in the way of the lie?

In “Ultraviolet” Wimmer’s anti-Christian obsession with crosses becomes a parody of itself. There are cross symbols everywhere—on the walls, on the elevators, on the tile floors, on the uniforms of the fascist-looking guards. Even some of the doors are cross-shaped, for goodness sake’s. I like crosses, but there’s just too much of a good thing in this movie.

Continuing the anti-Christian theme, the evil Daxus (Nick Chinlund) is the “vice-cardinal” whose building, the “arch-ministry,” is itself a giant white cross containing all his “mansciples” (yes, Wimmer actually coined that word). This, presumably, is a dual-purpose reminder of the nexus between Christianity and the Pentagon, since it was an “American weapons laboratory that created stronger, better soldiers.” The abortive result was the “hemophage” (Greek for “blood-eater”).

The film takes place in an “age where terrorism has been replaced by fear.” For those unfamiliar with paranoid leftist fantasies, this is code language meaning that The Patriot Act is more to be feared than Jihadi terrorism. Hence, the political entities in this one-dimensional film are the evil (American) humans and three different kind of hemophages: the Blood Chinois (a Chinese gang), a French group, and Violet (Milla Jovovich). Helping Violet is another hemophage, Garth (William Fichtner), whose scruffy face and fangs make him look more terrier than vampire. Apparently we are to deduce that in Wimmer’s world the Americans, French, and Chinese all represent selfish global interests which noble idealists like Violet do their best to defeat, and can defeat, because, well, they’re angrier. There are also scattered references to resurrection, cloning, and WMD’s, to name several topics that Wimmer isn’t qualified to make movies about. Mercifully, they are given short shrift, since Wimmer has nothing intelligent to say about them.

One can’t say anything critical enough about such a horrible movie. Worse than bad, it is fraudulent. Wimmer, whose favorite book is Mark Twain’s Tom Sawyer, commits an ethical transgression by promising to deliver a movie and instead producing the CGI equivalent of The Royal Nonesuch from Twain’s Huck Finn. The King and Duke were tarred and feathered for their fraudulent acting, and it makes one wish that Twain were here to write about fraudulent directors, too. In the memorable words of Oscar Wilde, you would have to have a heart of stone to see this movie and not cry or laugh in all the wrong places.

Positive—I will probably be one of a few, but, I actually enjoyed BOTH this movie and “Equilibrium”. Although the latter is the better of the 2 movies. I thought the story was pretty unique; some of the special effects could’ve been better. The special effects involving the weaponry were pretty cool though. The one thing I didn’t quite get were all the crosses popping up all over the place. Good dialog, very few expletives, good actors picked, plenty of good gunplay/sword fighting reminiscent of “Equilibrium” make this one I’d recommend.
My Ratings: Average / 3

…As for a review of the film itself, it is (as mentioned earlier) style over substance. It features such CGI nonsense as a motorcycle riding up the side of a building! Our “heroine” manages to butcher no fewer than 700 people in the movie, but interestingly enough, without blood. In fact, we do not actually see the overwhelming majority of deaths. Usually we see her swinging her sword, the camera pans back, we hear noises, and then the camera comes back to see her standing around forty or fifty dead bodies with her sword “striking a pose.” Hokey? Yes. Worst movie ever? Rent a Tarantino movie, or one of this year’s academy award nominees? Or for that matter Milla’s last couple of “Resident Evil” movies. … Movie plot : D / Directing : C+ / Cinematography : B+ / Acting : B- / Overall, score : C
My Ratings: Offensive / 3

David C, age 38
Positive—Come on, honestly what are you going to expect going into this move? You see the trailer and see nothing but non-stop action. I loved this movie, and for those that loved “Equilibrium”, you’ll like this one too. As mentioned above, there is, however, one quick shot that didn’t need to be in the film, but if you’re at least as quick at catching things as me, you’ll have no problem whatsoever at avoiding it. Great movie, lots of action, good soundtrack, fun. That’s why you go to a movie isn’t it? Why look so far into a film? I honestly think people look way too much into films to find any little thing. …A movie steps over the line when its overtly loud in its message to the audience, which “Ultraviolet” does not. Sweet fight scenes, if you’re like me, you will thoroughly enjoy it.
My Ratings: Average / 4

Daniel Robison, age 17
Negative—The anti-Christian symbolism in this movie make it unwatchable and offensive (the oppressive government’s buildings are in the shape of the Cross). It is a bad “B” movie that even the Mystery Science Theater guys could not make worth watching.
My Ratings: Extremely Offensive / 1

Riley, age 40
Neutral—Special effects in this movie are really good, but the basic plot is weak and the acting perfectly awful. There’s some language and risqué shots, so I wouldn’t recommend this to children—or to anyone at all, really.
My Ratings: Offensive / 2

Dana, age 21
Comments from young people
Neutral—I saw this movie and found it okay, but not for little kids. It was good, but it did have a scene where “Violet” was naked, but you could only see her backside, and it was in a dark room, so you really couldn’t see that much. I thought that this was a good movie overall. I didn’t find anything too offensive; there was no cussing that I remember. It did have a part where someone asked if she believed in God, but I don’t remember the answer. Overall, I found that the movie was pretty good; the fighting scenes where awesome!
My Ratings: Average / 5