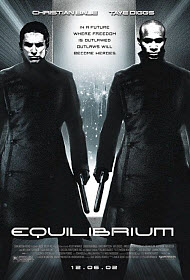 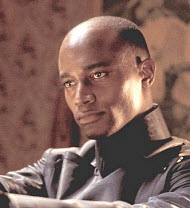 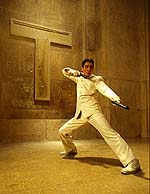 use of “clerics” as government agents in a fascist government

massacre/extermination of innocent people deemed undesirable by the government

“In a future where freedom is outlawed outlaws will become heroes.”

With little to look forward to in terms of major releases until “Lord of the Rings”, my husband and I decided to take a risk with a low-budget sci-fi flick, “Equilibrium”. Every once in a while, venturing into the daunting world of indie film (usually characterized by we’re-so-much-cooler-and-smarter-than-you ennui) can actually pay off. And I have to admit, it certainly did in this case.

Set in the near future in the dictatorship of Librium, mankind discovers that intense emotions like jealousy and rage are the true enemy—causing people to wage war and commit murder. So in the interest of creating a peaceful, anesthetized utopia, a new world order is established requiring everyone to deaden such feelings with the government issued drug, Prozium.

Naturally there are resistors—renegade art and music lovers who refuse to take their medicine and realize that suppressing anger and hatred also suppresses love and joy. Charged with rooting out these “sense-offenders” is an elite fighting squad, the clerics. And the most elite of this elite team is cleric John Preston (Christian Bale), a soldier so committed to the cause, he doesn’t even flinch when his wife is arrested and executed. In fact, Preston remains steadfast until his partner reveals himself as a poetry-reading traitor and a providential Prozium accident allows him to experience his own God-given emotion.

To be fair, Equilibrium’s heavy-handed plot sometimes contradicts itself, and the preposterous “Matrix”-esque gun battles drag on a little too long for my taste. However, the performances and a few of the action sequences, (particularly a pitch-black showdown near the beginning) are brilliant, and there was something about this Orwellian tale that roused my deepest beliefs.

One of the timeliest themes in this film is the idea that peace at any cost can be as evil and violent as war. And that not all anger—for example, righteous anger—is wrong. Maybe it’s just me, but during the whole film, I couldn’t help but think of the crowd of mockers on programs like “Saturday Night Live” and Comedy Central’s “The Daily Show.” Sophisticated scoffers who find the phrase “axis of evil” (indeed the very idea of evil) a source of cynical humor and insist that bothering to overthrow a murdering, raping regime couldn’t be anything more than a political ploy. If this film argues anything, its that power-mad dictators will resort to anything to maintain the people’s allegiance.

Oh, and, of course, there are all the implications of hinging a story on an emotion-hindering drug called Prozium. Without getting too deep into the debate, “Equilibrium” seems to question the excessive practice of giving overly energetic kids and despondent adults medication that could impede their natural, and needed, emotion. I have no way of knowing the filmmaker’s actual intent, but his story definitely made me consider some of the philosophical questions of our day—quite an extraordinary thing for a movie these days.

Positive
Positive—“Equilibrium” so far has been my favorite movie of the year. I cannot understand why they did not hype this one like so many other action flicks this year… Maybe it was because this one didn’t have a lot of Anti-Christian values. This film has a lot going for it, a good moral, good acting, great action, almost no cussing (I think that there was only two very small instances of cussing, but I have seen kids cartoons that said worse). This film rocked!

I have seen a lot of dirty trash on the TV and big screen that I would not dare let a kid see, but this one I think is fit for teenagers on up. There is some mild violence, but nothing that you cannot see on a family night viewing of the network channels. This is a must see movie!
My Ratings: [Better than Average / 3½]

Michael Whitt, age 29
Positive—This is one of the best movies I’ve seen in a while… if you don’t mind getting “mental.” Although some of the elements of the script aren’t original in nature, the gun-fighting choreography was very unique and impressive. Christian Bale does an excellent and convincing job as the central character. The movie is rated “R,” but happens to be cleaner than 99% of the PG-13 flicks these days… no cursing, no sex. The movie is violent but not in a gory way… the use of blood is minimal. The content, setting, themes, messages and unique action make the movie a good one!
My Ratings: [Better than Average / 4½]

Chris Kelley, age 28
Positive—My favorite movie of the year, and arguably of all time. An incredible combination of deep character development and extreme action makes for a strong combination that should be enjoyed by any sci-fi fan with a taste for an intellectual storyline. Christian Bale could easily take Keanu Reeves any day. A definite must see. [Better than Average / 5]

Jason Cook, age 20
Negative
Negative—This movie has a compelling storyline about “feelings” being regulated and punishable by death. But about half way through, and especially toward the end, the main message becomes clear. The “Father” or “Tetragrammaton” as he’s called is a clear reference to God Almighty (google Tetragrammaton, it’s the proper biblical name for God). The Tetragrammaton has workers called “Clerics” (Google that word, it means clergy of a religion) that kill people and sentence them to death, for “feeling” or enjoying things like art, music, and passion.

How are they sentenced to death… combustion. They are literally thrown by the clerics into a pit of fire. Eventually the “free thinkers” convince one of the clerics who is the top performer and has recently been named “the instrument of the Father” to conspire to kill the Father, so the free thinkers can take over.

I RATED THIS MOVIE AS OFFENSIVE AND NEGATIVE BECAUSE the underlying message beneath all the Matrix-like fight scenes and effects is that God the Father is evil and punishes us for our sins by sending us to burn in hell.

This movie portrays “sin” or things that are illegal, as natural human instincts like (i.e.: emotion and passion). This movie is crafty in how it makes you sympathize with the free thinkers, because it’s obvious they should be allowed to feel, but by naming the ultimate villain “Tetragrammaton” and his workers “clerics” they don’t try to hide their message of anti religion and pro-let’s indulge the sinful nature.

Watch the movie carefully, and it’s clear. I can’t support this movie, no matter how crafty it is in it’s God-bashing.
My Ratings: Moral rating: Offensive / Moviemaking quality: 4

Chenelle, age 26 (USA)
Comments from young people
Neutral—I loved this movie. It was great. The plot was cool, but the special fx weren’t as good as other stuff. I really need to point out the underlying perspective of it, a perspective that the reviewer DID NOT catch. I’m sad to bash this flick because I loved it. It was great. Good gun battles, fun explosions…

But, here’s my argument. The main character, John Preston, is what is called a CLERIC. He works for “The Father” in a society that is ruled BY Father. ***SPOILER*** Father is portrayed as a bad character near the end; someone who makes everyone behave horribly. Now, if you’ve seen this movie, Father was capable of basically mind control. I’m only explaining one perspective of this movie. I think the producers wanted to show us the “evil” of God. So, Father is evil. The Clerics (another word for PASTOR, remember?) are evil. The only non-evil is when John breaks free and kills “Father”, who actually is a lie. There is no Father; he died earlier. So even Father is a fake. ***END SPOILER***

This sounds like a bash on Christianity. Say what you want; I think this flick has more than one viewpoint and at least one of them are bad.
My Ratings: Average / 3

Garrett DeRossett, age 15
Positive—“Equilibrium” is the best movie I have ever seen. Most people I know don’t want to see it because there’s no big name actors, but even though it lacks big name actors, it still has great acting and a great story/plot. And from a Christian point of view, there is nothing that is offensive towards god. It was pretty violent, but violence is what makes a movie exciting. I would recommend this movie to anyone…
My Ratings: [Better than Average / 5]