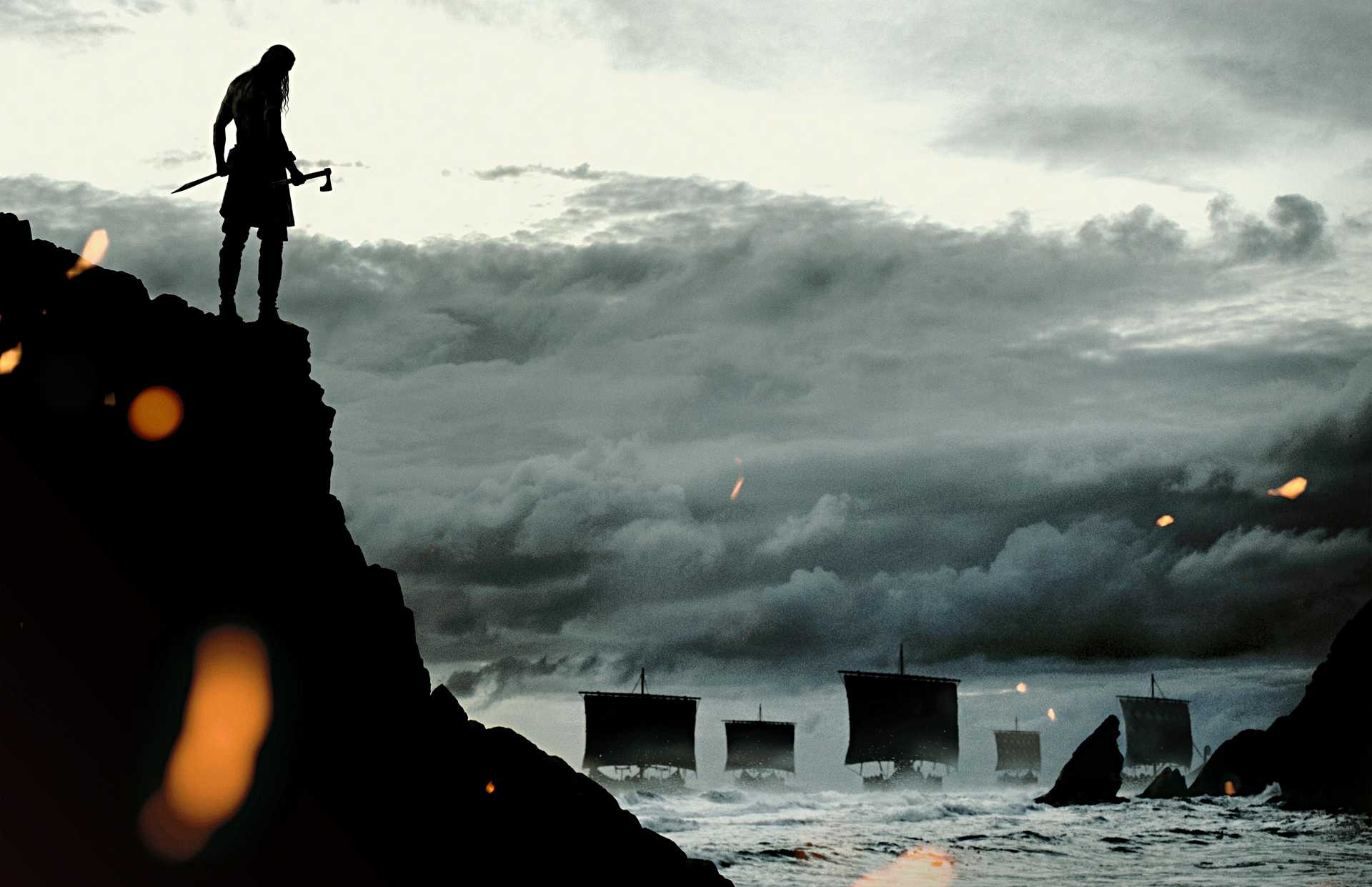 for strong bloody violence, some sexual content and nudity. 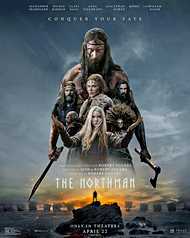 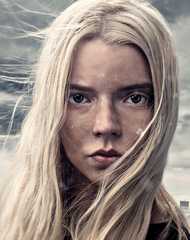 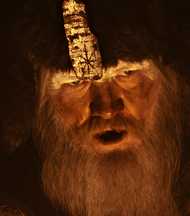 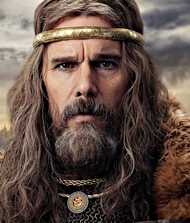 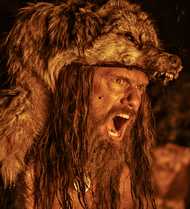 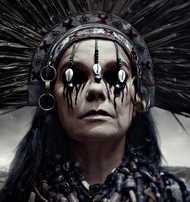 About witches in the Bible 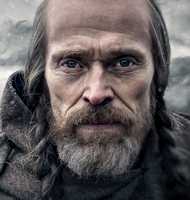 About the KINGS in the Bible 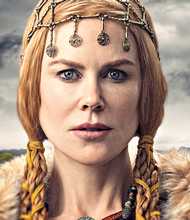 Queens in the Bible

It’s 899 A.D., somewhere in the North Atlantic. A young Norse prince, named Amleth (Alexander Skarsgård), simply adores his father, King Aurvandil War-Raven (Ethan Hawke). While his mother, Queen Gudrún (Nicole Kidman), can be a bit harsh, King Aurvandil has always been kind, yet supportive of his son and raised him in all things that relate to the kingdom and the crown he will one day inherit, which may be one sooner than Amleth realizes. I’m getting ahead of myself though.

While Amleth and his father are leaving the caves after receiving visions from a seer, the King is shot with multiple arrows. Amleth quickly runs for cover behind some rocks, only to discover the culprit to be none other than his treacherous uncle, Fjölnir (Claes Bang). After watching his uncle murder his father, Amleth runs to escape being killed himself, grabbing a rowboat and sailing out to sea all the while exclaiming, “I will avenge you father. I will kill you Fjölnir. I will save you mother.”

Years past. Amleth is now a beserker, a member of a tribe in which his role is to go from town to town burning, pillaging and seizing what they have. One night, after successfully seizing a town, he comes across a witch with a warning that Fjölnir temporarily took control of his home and ruined it and the oath he made to his father that, should anything happen to the King, he would avenge him.

Amleth has a decision to make. Does he seek vengeance for the crimes wrought against his family or just he let the past stay in the past?

With “The Northman,” I went in deeply aware of what I might encounter. Viking history, as many may be aware, is filled with countless moments of pillaging, violence, etc. Some of this I expected to play out on the screen, but there were many moments I didn’t expect to see displayed on screen and the things that did shocked me to my very core.

Some moments, no matter how graphic or historically accurate, are best to never be shown on camera. Moments such as, for example, in one particular scene, a mother gives a prolonged kiss to her grown son on his lips, is something that should never be shown. The sexual content and nudity in this film are indeed INCREDIBLY graphic, more than deserving of an NC-17 rating, but that isn’t the half of it…

The violence in “The Northman,” is so utterly stomach churning that if I hadn’t been reviewing the film I would have walked out right after the first few minutes. There are a couple particularly disturbing scenes that still linger in my mind two days after viewing the film: one in a which a group of villagers are herded into a hut and the hut is lit on fire (and we hear their screams), and another scene in which a young boy is killed on screen and the camera focuses on his and his dead mother’s body for a 2 solid minutes.

With that being said, the content below is extremely graphic in nature (particularly the violence and sexual content). Please only read on if you are seriously considering seeing “The Northman.”

VIOLENCE: I will not get into every moment of violence, as it it too lengthy, but needless to say, it’s extreme. The body count is high. People are butchered and stabbed by Vikings in multiple scenes. A king is shot with three arrows and stabbed with a spear; we see him beheaded as well. Another character is also beheaded. People are slaughtered with axes and swords in one scene. One Viking eats the flesh off someone’s neck. We see some dead bodies in water and on the ground. Someone is seen branding themself. A little boy is attacked by a man and bloodied. Amleth headbutts a man to death. Men are killed. A dead, naked male corpse is seen strung up high with his entrails hanging out. Naked male bodies are reconfigured to look like a horse and nailed to a house. A human sacrifice is tied to an altar (but the death is now shown). A dog attacks a person, and the dog is killed. Slaves have their throats cut. A man is severely beaten and bloodied, naked. A boy chops off the head of a horse and horse blood is sprayed all over the boy; we see the headless horse later. Another man is killed, and we see his intestines spill out. Another character is killed. A boy is killed. Buildings are burned with people inside them. A man is stabbed through the heart while he is beheading someone.

Children are violently ripped from their mothers’ arms. We witness a fox eating a hen. We see a skull with a scalp and hair. There’s a sequence involving a rough field game where people can beat each other with some sticks.

SEX: A mother sexually kisses her grown son on the lips. A court jester (Willem Dafoe) provides innuendo about her cup growing wet for more men and something about “hard” while doing a mock pelvic thrust. Fjölnir tries to use Olga (Anya Taylor-Joy) sexually, but she raises her clothing to reveal a bloody crotch cloth. A man and woman are seen having sex (his bare butt and thrusting shown). Sexual activity is shown in a hot spring.

NUDITY: Queen Gudrún is seen in the nude as her clothing is quickly lowered onto her (distant view and very brief). Shirtless men. Court jester mockingly displaying his male genitalia (briefly). Shirtless men in loincloths, brief. Men and women running around nude. Distant view of another man and woman having sex (his bare butt and thrusting shown). Partial views of a woman’s bare butt and breasts. Nude men strung up on a wall (dead). Full rear nudity (Fjölnir and Olga). A sword battle between fully nude men.

OCCULT: There are multiple references to the pagan god Odin and Vallhalla. We seen a couple statues to Odin. People visit a seer, acting like dogs in order to become men. In a séance a boy has a vision about his future as a man. A witch tells a character to do something. There is a second scene involving a seer and another vision that accompanies the seer. There are some discussions on the gates of Hel (different spelling). There is talk of evil spirits and demon attacks upon some of the villagers (this isn’t the case). Soldiers begin killing themselves thinking they are possessed.

About idolatry and false goods in the Bible

About idols in the Bible

What is the Occult?

The Occult—What does the Bible say about it?

ALCOHOL/DRUGS: Men drink with abandon after several different battles and contests. Some getting decidedly inebriated. Olga uses a special mushroom to create a soup with hallucinogenic properties that cause men to fall unconscious and/or see terrible visions, in some cases to the point of stabbing themselves. Amleth and his father lap up bowls of some sort of drug-laced beverage that give them a shared vision.

If there is any lesson to be found in this film, it is that human vengeance solves nothing. Without spoiling the film, I’ll just say that when vengeance is a character’s or anyone’s primary motivation in life, the results are often not favorable.

Likewise, in real life, vengeance clouds judgment. It can consume one’s every thought, desire and goal until there is nothing left but hate in one’s heart. It’s like a cancer that spreads. In contrast, Jesus tells us this…

“You have heard that it was said, ‘An eye for an eye and a tooth for a tooth.’ But I say to you, Do not resist the one who is evil. But if anyone slaps you on the right cheek, turn to him the other also. —Matthew 5:38-39

About mercy in the Bible

What is true Christian love, according to the Bible?

What is meekness? and why is it a trait of the truly wise?

Jesus is telling his followers to turn the other cheek not because it’s easy, but because it keeps us from sinning further and allowing God to take control and to help us. Our first instinct is to want to hurt the other person back, but when we turn the other cheek, we are saying, “I forgive you because God forgave me for my sins.” In Paul’s letters it states the following as well…

“Be angry and do not sin; do not let the sun go down on your anger, and give no opportunity to the devil.” —Ephesians 4:26-27

“Beloved, never avenge yourselves, but leave it to the wrath of God, for it is written, “Vengeance is mine, I will repay, says the Lord.” —Romans 12:19

“The Northman” has been hailed by some secular critics as “beautiful and brutal” and one of Director Eggers greatest films of all time. I agree there are some parts that are beautiful (like some of the performances), but it’s the BRUTAL part that I, as a Christian and a reviewer, am more concerned about here; there is a LOT of graphic brutality on display.

“The Northman” is a graphically violent, sexually provocative movie that the Holy Spirit does not need to be subjected to. I strongly discourage anyone from seeing this film, especially teens and children.

Learn about spiritual darkness versus light

Negative
Negative—This was possibly the worst movie I ever sat through. I only stayed because I was with a friend who hoped to find some redeeming quality in this film, but truly none can be found. It was extremely pagan and demonic, so I would say don’t waste your time or money and guard your heart and soul. I had to pray the “ick” off when I left the theater.

This is kind of the norm for Hollywood now: gratuitous sex and over-the-top violence. It actually gets 0 stars (only because negative numbers were not a choice).
My Ratings: Moral rating: Extremely Offensive / Moviemaking quality: ½
Dee, age (USA)
Comments from young people
Positive—I thought it was a solid movie. As a Christian I don’t mind Norse mythology stories because I know it isn’t real, so seeing it is about as harmful as watching an episode of SpongeBob in terms of realism. Obviously there’s content here kids shouldn’t see, but the violence is fake and the nudity is tolerable.

The story was well told, the cinematography was beautiful, and the acting was wonderful. Robert Eggers continually proves himself as a brilliant up and coming director. I think the pacing was a bit off, and some character development was sparse, but overall it was genuinely a good time for me.

It reminded me of sitting in history class and learning about other cultures. Their stories and beliefs aren’t real, but the message that lies within them aren’t completely forgettable. The Northman shows us that sometimes it’s better to forgo our wants and desires to achieve our destiny. And that’s a solid message to promote.See all »

Christians sometimes feel as if “bad” content nexes everything a film has to offer, but I think in situations like this we should broaden our focal points and realize that what we watch doesn&rsquott mirror what we believe. It was a good story with elements that are obviously not meant to be replicated and or lauded. Such is life. We should cherry pick the good from the bad.
My Ratings: Moral rating: Average / Moviemaking quality: 4½
Matt, age 18 (USA)