for sexual content, language and a brief disturbing image. 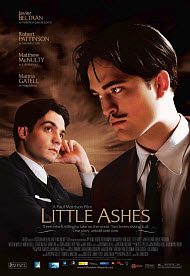 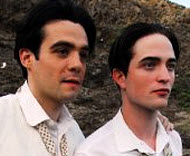 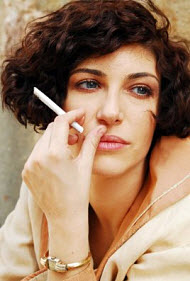 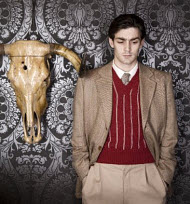 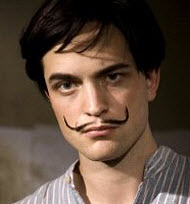 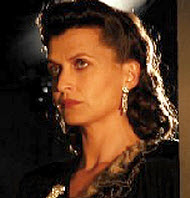 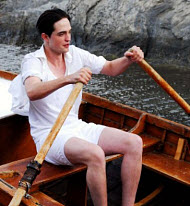 PERSONAL STORIES of men who have battled same sex lust in their own lives:

Claim: God made me a homosexual. Response

“Little Ashes” is an indie film that was released in a limited number of U.S. theaters in May of 2009 for a very short run, and that starred Robert Pattinson. [Note: Even though “Twilight” had already been released in the U.S. the previous November 2008, Pattinson had actually completed filming “Little Ashes” months earlier—before “Twilight”.]

The story takes place in Spain, circa 1922, at the Students’ Residence in Madrid, where young men (predominantly) arrived to study at the School of Fine Arts. The political landscape is one of changing mores, and there are whispers of revolution which fill the hallways of universities, and pepper the table-top-conversations of bars and cafés, not only in Madrid, but throughout the urban cities of Western Europe, as well. Jazz was popular in the U.S. and the 20’s were roaring full-steam—with the flapper influence reaching all the way into Spain. Nevertheless, the long standing conservative attitudes on life, culture, the arts, and sexuality were still heavily influenced by the Catholic Church during this period and extended into the society at large.

It is in this setting that we are introduced to Philippa Goslett’s screenplay, which will give a somewhat fictional account of what might have happened between three interesting historical characters of the time. [In her interview on the DVD extras, she explains that she did extensive research on their backgrounds and completed a couple of rewrites over a period of years, before arriving at the final story. Her desire was to make it fit within the parameters of as many facts as possible.]

First we meet Federico García Lorca (Javier Beltrán), an eager student who writes beautiful poems and is filled with a love for writing and for life, who later is to become one of Spain’s most renowned poets. We also find his best friend Luis Buñuel (Matthew McNulty), a revolutionary cinema fanatic who gains the inspiration for his short films from the disturbing political situation in Spain, one that is quickly deteriorating. Lorca and Buñuel are the best of friends who live the life of students and artists, who characteristically put down their government—as university students often do—expressing their rebellion in earnest, but do not really color too far outside the lines.

But along comes a quirky young painter, Salvador Dalí (Robert Pattinson), who dreams of becoming a great painter, who will turn the art world upside down one day, and who constantly challenges social boundaries while stirring freedom of expression. García Lorca and Buñuel become fast friends with Dalí, evolving as a triangle of trouble, in a semi-rebellious fashion, which was avant-garde at the time. “No limits,” becomes their mantra. Unfortunately, a secondary relationship begins to develop right away between Lorca and Dalí, an attraction which they feel compelled to keep secret, especially in light of the fact that Buñuel despises homosexuals and talks about it openly—not to mention the turmoil it would create, overall, if it were to become public—considering the time and place.

From this point on, the tension begins to build in the film coinciding with the matching rising tensions in pre-Franco Spain, as director Paul Morrison indicates with his sometimes, awkward historical period-montages, edited in throughout the film in black and white, running almost like a continuous computer program in the background. Sometimes it worked, and sometimes it didn’t. The themes and subject matter included: the intense, “push-me-pull-me” attraction between García Lorca and Dalí, their complicated relationship with Buñuel, set against the political landscape of Spain, and balanced by each of their own unique sparks of artistic genius.

It is apparent that these three men have a great deal of exuberance and talent, which makes for an interesting biographical sketch of the early years of some young men who were to become very famous. These facts and story have the potential to create a very rewarding film on a historical level. I, for one, have always been fascinated by Dali’s unique artistic style and have been enthralled with Lorca’s beautiful poetry as well, so insight into this period of their lives had its own built in interest level. Unfortunately, the script tends to wander a bit, and their dialogues and eccentricities seem to overpower the viewer and sometimes confuse the continuity of the film.

That was also exacerbated by a particularly unnerving thing for me while watching the DVD, and that was listening to three different versions of speaking English with a Spanish accent. Both Pattinson and McNulty are British, and each spoke English with that Spanish accent, which was very different from one another. Sometimes words or parts of sentences were garbled and difficult to decipher. Beltrán and McNulty were strong and believable in their respective roles, but, in my opinion, Pattinson was miscast. He really looked too young for the part, which made the Dalí moustache he donned later in the film (when he was supposed to have aged about 8 years), look even more ridiculous. Some of his acting looked stiff and wooden-like, as well. While he might get credit for trying a unique role, his skills didn’t quite measure up, in my opinion.

From a Christian perspective there are numerous issues that are contrary to scripture and are disturbing on so many levels. The most obvious is the same sex attraction that is acted upon in the story—leading to kissing by Dalí and Lorca in moonlit-seaside-water scene and with two additional kissing scenes that follow later in the story. (This may be particularly unnerving for any young teenage girls who may want to rent this expecting to see Edward Cullen, from “Twilight”.) While Lorca seems to be more comfortable with his homosexual attractions, Dalí seems ambivalent and unsure, which manifests a 3rd time when they begin to undress and have some body to body contact—right before Dalí pulls away and curls up in a fetal position, still partially clothed.

Lust and lasciviousness in the Bible

There is profanity, which included the “f” word, at least twice, and, finally, there is a disturbing scene where Buñuel pretends “to pick up” a gay guy in front of a public toilet for a sexual favor and then beats on him and kicks him in the groin while he’s on the ground.

There are some positive aspects to the film. For one thing, the cinematography is beautiful from beginning to end, especially along the coast and in the Spanish countryside. The artistic sets, the period costumes, and the setting—where they filmed in Barcelona—are all pleasing to the eye, especially considering the budget of the film. The acting was very good, by the majority of the cast, and the original music composed by Miguel Mera was exceptionally good. But the difficulty in embracing the film comes from the very heart of the story itself. Much like the angst of the two men burning in passion for one another in “Brokeback Mountain,” in a world where neither of them would be accepted in society, this film leaves the viewer with that same sense of sadness.

The temptations that Lorca and Dali are facing in their attractions toward one another are just that: temptations. There is no requirement for them to be acted upon. As the scripture clearly says in (1 Cor. 10:13):

“No temptation has overtaken you except such as is common to man; but God is faithful, who will not allow you to be tempted beyond what you are able, but with the temptation will also make the way of escape, that you may be able to bear it.”

HOMOSEXUALITY—What’s wrong with being gay? Answer
Homosexual behavior versus the Bible: Are people born gay? Does homosexuality harm anyone? Is it anyone’s business? Are homosexual and heterosexual relationships equally valid?

PERSONAL STORIES of men who have battled same sex lust in their own lives:

Claim: God made me a homosexual. Response

To his credit, in the film, Lorca does get on his knees and pray by his bedside to ask forgiveness for his impure thoughts, at one point, but, unfortunately, he addresses that request to Mary. Eventually he gives up and appears to surrender to these passions, regardless of the outcome. If only he could receive the truth of 1 Corinthians 10:13, after calling out upon the name of the Lord to be saved.

There is a quote at the beginning of the film that is taken from a letter that Federico Lorca once wrote to Salvador Dali. It reads as follows:

THERE IS HOPE! Discover God’s promise for all people—told beautifully and clearly from the beginning.

“Remember me when you are at the beach and above all when you paint crackling things and little ashes. Oh my little ashes! Put my name in the picture so that my name will serve for something in the world.”

This is just about the saddest 3 sentences I’ve ever seen in writing. It is quite profound and heartbreaking at the same time. It likely expresses the feeling of probably millions of men and women on the Earth today. If only they could have eyes to see and ears to hear, that there is only one name that will serve for something in the world today, and in the world to come, and that name is Jesus (Phil. 2:9).

While I cannot recommend this DVD for viewing, I can suggest that you take a moment to pray for someone’s eyes to be opened, especially a friend or a loved one who may be struggling with same sex attraction today. God is able to deliver them and the fervent, effectual prayer of a righteous saint will avail much.