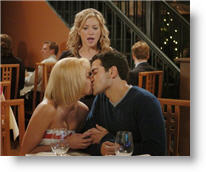 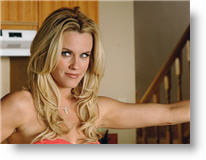 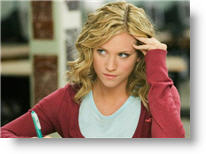 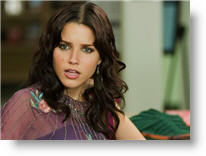 I’m ugly. Why was God so unfair to me this way? Answer

John Tucker is a three-timing player with enough charm to woo the entire high school cheer-leading squad. When his current trio—head cheerleader Heather (recording artist Ashanti), academic Carrie (Arielle Kebbel) and Beth (Sophia Bush) discover his cheating ways, a full blown cat fight in the school gym settles into a truce between the girls to plot revenge. Kate (Brittany Snow), the sweet but awkward new girl who has no friends (due her own mother’s dysfunctional habit of dating men and moving away), eagerly joins the force to “kill” John Tucker’s ability to repeat his past indiscretions.

Pranks on John Tucker include scandalous pictures turned into posters portraying John as having various STDs, but instead of ruining John Tuckers reputation, he is given an award for promoting community awareness of STDS, thus elevating his status even further. Another stunt includes drugging John Tucker with estrogen stolen from Heather’s mother which Heather uses believing it will increase her breast size. When drugged, John exhibits stereotypical symptoms of PMS and the stunt backfires as John Tucker is congratulated for exhibiting his sensitive side, adding again to his desirability factor. The main focus of the revenge campaign turns to an attempt to have John Tucker truly fall in love with Kate, and thus have his heart broken.

This movie had the potential to humorously address many of the difficult pressures of self-worth and fitting-in that text-messaging teens and tweens experience. In the beginning of the film, Kate seemed to be someone with a different point of view, less shallow and one who wasn’t going to sell out, at least in the long run. Instead, only a bit character, an ex-cast off of John Tucker who is reduced to tears at the very mention of John Tucker’s name provides the only humorous, yet realistic, view of being used and dumped. In addition, the character of Beth is known as the school slut, but this title is not presented in a necessarily derogatory light, but merely as another shade of her personal makeup.

“John Tucker Must Die” actively promotes the relentless drone of casual, teen sexual experience and an impossible standard of “hotness’ for girls and muscularity and athleticism for boys. The dialog is sprinkled with numerous profanities, including s**t, motherf****er, and countless exclamations of “Oh my God.” The fact that John Tucker has slept with countless girls and with at least two of the girls seeking revenge is presented as a normal part of teen dating. Other negative elements include Beth and Kate sharing an extended practice make-out kiss which is witnessed with delight by an observing teen boy. Jokes of “being in Beth’s pants,” John Tucker preferring girls on top, erections, genital herpes, neutering John Tucker and boys wearing thong underwear are also played for laughs.

For Christian teens desiring to wait for marriage for sex, this movie is in your face with the opposite message. Casual teen sex is presented as so normal that not having sex is not even up for debate. The Bible admonishes, “For, as it is written, ‘The two shall become one flesh.’ But he who is unified to the Lord becomes one spirit with Him. Shun immorality. Every other sin which a man commits is outside the body; but the immoral man sins against his own body.” (1 Cor 6:16-20).

Although Kate is initially introduced to the viewer as a “nice” girl she is easily persuaded by the trio of revenge seekers into seducing John Tucker via a video phone, wearing only lingerie. This film is not merely unfeeling and morally ambiguous from a Christian perspective, from an entertainment perspective the fatal flaw of “John Tucker Must Die” is the complete lack of heart the film exhibits. Real friendship is not forged in the union of the revenge seekers as their relationship is built on a faulty premise from the get-go. Getting even is an empty business. Leviticus 19:18 states, “Do not seek revenge or bear a grudge against one of your people, but love your neighbor as yourself. I am the LORD.” The girls don’t grow, learn or become more enlightened as the film moves forward, and the audience is given nothing to empathize with, cheer on, or even laugh at.

The ambiguity of John Tucker’s behavior becomes even murkier as he feigns true affection for Kate but fails to adopt real growth or maturity. The movie continues its downward spiral toward the conclusion that the only fault of John Tucker was his lack of honesty by not revealing his intention of dating and bedding numerous girls at the same time. The lesson seems to be: Shame on those silly girls for putting such an old fashioned moral trip of exclusivity and commitment in a dating relationship! This is not a funny, nor one that makes for a satisfying story about relationships for any age group.

Neutral
Neutral—…The movie was not as offensive as the trailers made it seem. It really was okay for an older teenager. I wouldn’t let any young children see it. There are a few offensive scenes, like when one girl is teaching another girl how to kiss, and there are a few sexual comments made through the movie and some mild language and a scene where the girl is wearing lingerie and a guy puts on ladies thong underwear. But the story line is kind of cute and the main characters conscience gets the better of her and she learns how to be herself (herself being a sweet kind person).
My Ratings: Average / 3

Kelli, age 31
Negative
Negative—What a dumb movie. It attempts to be a morality play, feel-good movie for silly teenager girls. They might like it. I guess, but I was bored silly and only saw this by accident. I would say this is a John Hughes type of movie for today’s teenage girls. You’re supposed to dislike John Tucker at first. but end up seeing him as misunderstood. Eh, to me all the characters are unlikable. Every character is a total teen caricature. The supposed “good girl” character comes off just as vapid as the other vapid girls she supposedly bonds with to get revenge.

I don’t recommend it because it’s offensive, but for having zero creativity. It’s nothing I haven’t seen a million times on some stupid TV sitcom or in every single John Hughes teenager angst movie. This is a totally predictable movie which anyone could figure out the outcome in the first 10 minutes.
My Ratings: Offensive / 2

Jeff W., age 48
Comments from young people
Negative—The morals in this movie just were not there, for example: Teen sex was viewed as normal including sleeping around, There was an instance where John Tucker and the rest of the basketball team along with the cheerleaders go to regionals, so they stay in a hotel and Kate (John Tucker’s new girlfriend) teases him by using the webcams they both have in their rooms and wearing nothing but her bra and underwear, and she told him to come on down to her room but wear what’s under his bed (which was a thong) but to scale the outside and told him that her bedroom was 3 rooms away which was let’s just say the wrong room. I hated the fact that all the jokes in this movie were based on something dirty. I wouldn’t recommend seeing this movie at all!
My Ratings: Very Offensive / 4

Jordan, age 15
Negative—I must say that this film was somewhat offensive to today’s growing teens. It had bad examples as to how you have a clean relationship with someone. This film is definently not for anyone under the age of 18. …
My Ratings: Offensive / 3

Alyssa D., age 13
Positive—…While there were some themes which would not be acceptable for younger audiences, there were good things about it as well. For one thing, all the reviews say that sex is a main theme and that “sleeping around” is the norm, and virginity is unacceptable to the students in this movie. However, the main character, Kate, has never had sex, and remains pure throughout the entire movie. Also, while perhaps Kate’s desire to have friends overcomes her good judgment, one must consider that she has never had friends, and desperately wants to fit in somewhere. Don’t we all? While there is a scene in a hotel room in which Kate wears lingerie, except for the purpose of showing her friends, she remains mostly covered the entire time by a bathrobe. Also, sex is not the purpose or intention of the scene. The kiss between the two girls in not extended or Sapphic in any way, Beth does in fact voice her disgust with the situation. Also, the review does not mention that in the end of the movie, Kate and the other girls form a real friendship. Also, both Kate’s mom and her friend Scott (John’s brother) try to open her eyes to how wrong her behavior is. While I agree that this movie is not for young audiences, for older teenagers and young adults, it is a movie with may laugh out loud moments and a “fairy tale ending.”
My Ratings: Better than Average / 4

Katie, age 17
Positive—I love this film. There was some parts that weren’t that good, but I thought that was very funny.
My Ratings: Excellent! / 5

Stephanie, age 16
Positive—I loved this movie. Yes, it did have bad parts in it, but most of the movie was okay. There were never any sex scenes (just Kate in her underwear, and the two girls kissing). Jokes were mainly dirty, but hey, that’s life for you. I’m not saying that sex before marriage is right, because it’s definitely wrong. But like another review said, Kate just wants to fit in and never “did it” with John anyway. John’s brother and Kate’s mom weren’t suggesting the girls behavior (which brings some good morals in). I personally enjoyed this movie, even though I wouldn’t suggest following their sexual behavior.
My Ratings: Average / 4½