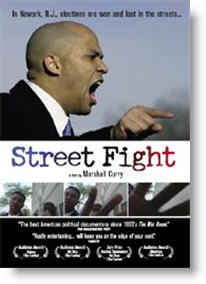 “In Newark, N.J., elections are won and lost in the streets.”

Here’s what the distributor says about their film: “This documentary follows the 2002 mayoral campaign in Newark, New Jersey in which the Cory Booker attempted to unseat longtime mayor Sharpe James.”