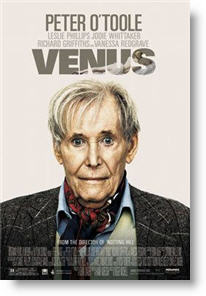 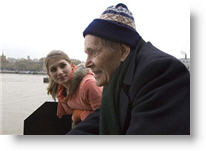 There are moments in “Venus” where the great Peter O’Toole looks straight into the camera with the playful, mysterious smirk of an actor supremely confident in his talents, yet refusing to give a hint as to how he is able to be so good at what he does. But, there are also moments, however brief they may be, where we see a side of him that is frail, vulnerable, and ultimately frightened about how life seems to have gone by far too quickly for a man once on top of the world.

This is a credit to the talent of Peter O’Toole, who in “Venus” plays Maurice, a former heartthrob of the silver screen who now does most of his acting in a gurney, playing old men on their deathbeds. He is close friends with Ian and Donald (the fantastic Leslie Phillips and Richard Griffiths), both also former actors. They sit around a table at the local diner and read the newspaper, often to check the obituaries for former friends and co-stars. They even discuss how long their own obituaries will be when it is their time to go—a few sentences, a paragraph, half a page?

Their quiet lives are interrupted by Jessie (Jodie Whittaker), a 20-something wannabe model who has come to look after Ian. She talks sparingly, eats drinks constantly, and eats even more often. She is very little help to Ian, who is frustrated and concerned that the stress she is causing him will eventually kill him.

Maurice visits one day, and begins to try and bring Jessie out of her shell. At first she won’t speak to him, but he slowly works his charm and she begins to open up. She needs a job, and wants to model, so Maurice sees it as perfectly reasonable to sign her up to be a nude model for a local art class. It becomes apparent that the appearance of a young woman in his life has sparked in Maurice a youthful lust he hasn’t felt in quite some time. He takes her places, buys her things, all in hopes to keep her around, to feel her hair, or hand, or shoulders. She allows him to do such things in hopes of getting more stuff.

“Venus” is not a film I can recommend to Christian audiences. Maurice is a leering, dirty old man who is okay with lusting after a young woman and trying to seduce her. He has no problem asking to kiss her neck, or feel her legs, or enrolling her in a nude modeling class so he can get a glimpse of her. There is some female nudity in the film, although there are no sex scenes.

There is also one very bizarre and disturbing scene where Jessie does something sexual in hopes of getting Maurice to get her something. All the scenes in the film are played to almost be cute, but they seem forced and are rather unsettling. There is plenty of profane language in the film, and slang sexual terms are also thrown about throughout the movie. The message of the film seems to be that aging is a frightening process made comfortable only by lusting after youth and desiring the things that were once attainable. This is not a film for children or teenagers, although it is doubtful most would want to see it.

Is “Venus” a good movie? Well, it features great performances. O’Toole is as good as you have heard in the film, but his character is not one that we sympathize with at all. The movie wants us to feel sorry for him, and to almost cheer him on in his attempts at sexual conquest. Maurice is a creepy old man, but the film treats him otherwise.

To me, the best moments in the movie occur when Maurice and Jessie aren’t together. When we see Maurice and his friends, it is always enjoyable and very funny. There are also a few powerful scenes where Maurice goes and visits his ex-wife Valerie (Vanessa Redgrave) who is dying of cancer. These scenes show that Maurice can be a funny, cranky, kind old man and that the film could have been something wholly different had it taken a different angle on Maurice’s life. But whenever Jessie, his Venus, shows up, the film unravels into one awkward, contrived scene after the other.