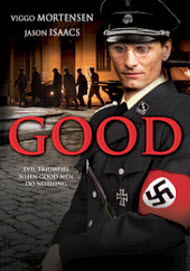 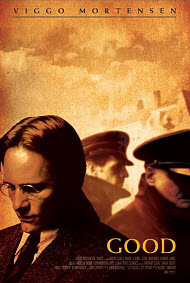 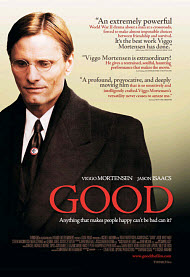 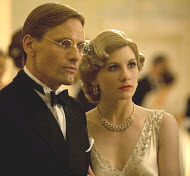 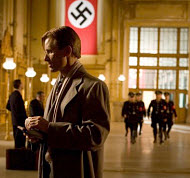 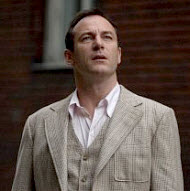 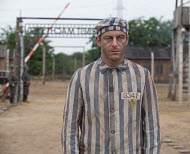 “Anything that makes people happy can't be bad can it?”

The year is 1937. Hitler and the Nazi party have taken control of Germany and are radically changing the nation in a way that many believe will soon lead to war. John Halder (Viggo Mortensen) is such a man caught in the midst of these changes. Surrounded by conflict, Halder finds himself torn between a life promoting his own ideals and beliefs and a life tied to the Nazi party, wealth and happiness.

The story revolves around a fictional novel written by Halder in 1933 whose title remains unknown. One can gather that perhaps this book was meant to represent the various pieces of literature and propaganda the Nazi party used to further their views on euthanasia such as The Right to Death by Adolf Jost and The Permission to Destroy Life Unworthy of Life by Alfred Hoche and Karl Binding. Although Halder’s book is a romantic novel, the story deals heavily with the promotion of compassionate euthanasia in a similar way that these literary pieces did. Years later, as the Nazi party is beginning its distribution of propaganda, Halder’s book is read by some of the high ranking officials in the party, including Adolf Eichmann, and he is called upon to not only join the party, but to promote his book and write a short treatise promoting the euthanasia of the sick, handicapped, and those whose lives are deemed unworthy of humanity. Halder faces great personal conflict, particularly in dealing with a mother with Alzheimer’s and tuberculosis, as well as a close personal friend, Morris (Jason Isaacs), who is Jewish and is losing his freedoms and dignity as the total evacuation and eventual imprisonment of all Jews draws closer.

The film itself is based on a play (of the same title) written by C.P. Taylor that premiered in 1981, and it is evident throughout. Dialogue, not action, is the main means of conveying the story. Mortensen is the focal point of a character change that helps explain how the Nazi’s took control so quickly in Germany. His life, which is a torrent of difficulty and stress, quickly turns when he begins to embrace the Party. He leaves his wife for a younger more attractive student, abandons most of his ideals, but throughout his every decision seems to be rationalized. Only in the final moments of the film do we see his internal struggle finally result in great remorse and a realization that his actions have, in effect, indirectly placed blood on his hands in a way he never dreamed would happen.

The story is particularly fascinating as it provides a new and distinct view on what was happening during a time period that shaped our Earth in a way that few have. So many films have shown the concentration camps and subsequent Great War that was fought, but few have dealt with the subject of the Nazi’s ideals, how they developed and how the people slowly began to accept them.

Some of the key developments I felt were a bit vague and underdeveloped. The specifics of Halder’s book and the ideas behind his promotions for the Nazi Party (as well as how mild or extreme they are) are left largely unexplained, and ultimately the film ends all too soon. The lack of action is surprisingly not a negative factor in the film. On the contrary, perhaps “Good”’s greatest downfall is that it leaves one thirsty for more details and more conversations and perhaps a greater scope on the slippery slope that led so many to embrace what was considered extreme only years prior, simply for personal profit and career advancement.

Language and sexual content are the main concerns with “Good.” The “f” word is used liberally upwards of 20 times, although there is little other language. There is no nudity, but there are multiple scenes that implicitly show sex, including various scenes where Halder is with his mistress who eventually becomes his second wife, one where a woman is only covered by a blanket, and another where Halder’s wife is in the beginnings of performing oral sex on him. Violence is virtually non-existent, although there is a concentration camp scene at the very end of the film in which Jews are being mistreated and some are dying.

There are many things this independent film has to offer. Valuable moral lessons can be learned, including insight into human character, consequences of one’s actions, standing up for what you know to be right, etc. A fascinating character study, “Good” shows how easily it can be to simply follow the current instead of fighting it. It may end a bit too quickly and may not spark everyone’s interest, but what “Good” has to offer certainly cannot be written off or overlooked.

Although it isn’t a true story, it is a true testament to how simply going along with the flow and giving into immoral ideas and values for personal gain can lead to sin and evil that one never intends. Mark 8:36 states,

“What good is it for a man to gain the world yet forfeit his soul?”