The Haunting of Molly Hartley 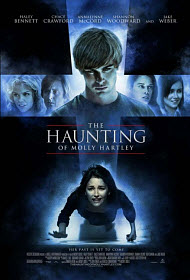 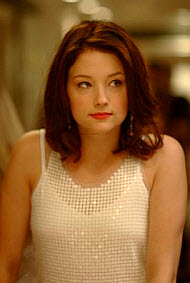 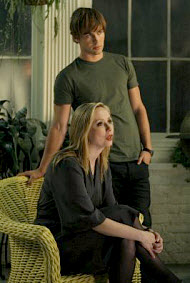 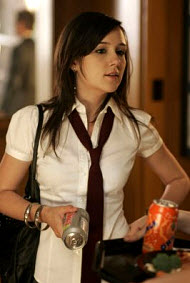 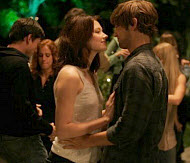 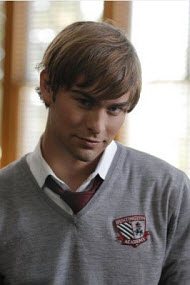 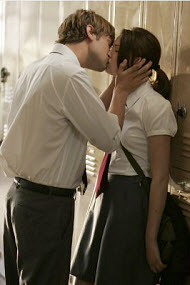 Here’s what the distributor says about their film: “A teenage girl discovers that her parents made a pact with the devil to save her life. When the devil comes to collect, terrible things begin to happen and she must figure out if and how she can save herself.

Molly (Haley Bennett) is a 17 year old girl who has physically recovered from a stab wound inflicted by her mother, but the psychological scars that remain run deep. To help her begin a new life after her trauma, her father has moved her into a new school. With her eighteenth birthday approaching, Molly is haunted by nightmares of her mother's attack upon her while dealing with the stress of being the new girl in school. Symptoms of psychosis that seem to be affecting her seem to foreshadow an onset of the mental illness that took control of her mother's life, but of several different explanations for her distress, the most unforeseen and terrifying is revealed as the truth.

Ultimately, Molly discovers that her mother and others who share her mother's concerns want her killed in order to save her from a preordained life as a servant of the Devil.”

When the word “haunting” appears in the title of a movie, you can generally expect to view a story about a restless and vengeful soul that had been separated from life by some horrible means, and its unfinished Earthly concerns are frighteningly pursued against unwary home buyers or campers or some such. That is the typical, worldly take on the afterlife, but a more biblical perspective would throw such spooky encounters into the realm of the demonic. Deceased human spirits are not roaming about scaring people in the land of the living, but there are malevolent spirits that do exist, who would deceive us into thinking this.

“The Haunting of Molly Hartley” rightly pegs the culprit realm of poltergeists, but makes a worse blunder in just about every other theological way. Can a person sell their soul to the Devil? Is it theirs to sell? Can someone else sell it for them? Is God allowing souls to be sold on the open exchange? While this is a time-worn theme in horror movies, there is no such thing as selling your soul to Satan, except, perhaps, in the sense that the unrepentant sinner will join him in one day in the Lake of Fire. But this is the underlying tenet of the movie, and there’s the Devil to pay when the title character (actress Haley Bennett) reaches the age of majority.

What’s a loving parent to do? Kill their daughter, is the movie’s answer, and so this is the goal of the parents lest they lose their beloved child for eternity. Which brings up a philosophically pointless conundrum: “Would it be justifiable to kill someone to save their life?” The answer doesn’t come easy in the film, as everyone from the criminally insane to the born-again Christians are out to get poor Molly, and the distinction between the two groups is not clear.

Christian elements are added throughout the film to lend a spiritually tweaked flavor, and, as usual, its representatives are weird and suspect. From the school chum who keeps evangelizing Molly, to the institutionalized mother who calls her to prayer, there is no salvation. This is disturbing because even when Molly wants to receive Christ, and calls on Him to be saved, she is somehow denied. How far this is from biblical reality, yet even the movie trailer proclaimed hers to be “a soul that can’t be saved.” Lines from the Apostles’ Creed are cited, the works of Dante are discussed, and the Bible (to which he alludes) makes appearances repeatedly—in only negative contexts. When requested to pray, Molly begins with the stereotypical Roman Catholic confession “Forgive me father for I have sinned…” This only sets up the audience to be shocked as the next instant explodes with violence.

Bloody violence in the movie is not outrageous, since the instance of most of it is not really seen. Most of it is viewed in the momentary aftermath and without gory excess and prurient detail. However, bludgeoning, breaking bones, stabbing, fatal falls and automobile accidents are all ingloriously presented to elicit a perpetual sense of foreboding, and there is blood.

As is typical of the genre, ominous music, nightmarish apparitions, strange voices, stalking and danger combine to offer nothing terribly new here.

Because of the Christian tidbits, certain faulty theological assumptions are made by the writers (aside from the aforementioned soul-selling), and those would include baptismal regeneration (that baptism effects salvation), dualism (that good and evil are essentially equal competitors in the universe), and that Christian faith is essentially thoughtless and without reason.

The film is set around the life of a teenager, so after lying to her father about going to study, Molly winds up at an underage drinking party where kids proclaim how “wasted” they are. There is brief teenage smoking, and the foul language, while not exorbitant, is scattered throughout the film and includes most of the usuals, including at least one use of the f-word, and an exasperated use of “god!”

While there is no nudity or sexual situations, there is a brief moment of undress when the starlet changes clothes, but then the camera peers through the window and stops on one of her bare legs. It wasn’t especially sexy, but perhaps trying to be.

People attend scary movies for some of the same reasons they might ride a roller coaster—to experience something dramatic, thrilling, and exciting, and to emerge unscathed after facing fear. The difference between the two is that one physically feels dangerous, while the other, though certainly stimulating physical response, is all in the viewer’s mind. “The Haunting Of Molly Hartley” may deliver some shivers and provide a fairly coherent adventure, but it also delivers falsehood, darkness and violence. Evil is too strong in this movie, and good is muddled to indiscernible measure. The end of the movie cannot be called. Is it a good ending or a bad ending, as far as stories go? Does “happily ever after” express how it turns out? Because the whole thing is spiritually wacky, the end is an enigma. Without giving it away, in case somebody out there still feels inclined to view this mess, let me just say that “good” is defined by God and not those who would flip it on its head (Isa. 5:20).

Nuff said. I don’t recommend the movie, and you won’t be the worse for having let it pass you by.

Negative
Negative—The first third of the movie—roughly—shouted “a 1, no, a 1½!” I couldn't shut it out; I might as well have been listening to Gilbert Gottfried whisper. The second third picked up, considerably so. I'd never seen a movie bounce from such a painful low to a moderate high, but Molly Hartley did. The last third, well… as many other reviewers far and wide will testify, was about as cogent as Tom Cruise preaching Scientology to the masses.

The first act relied on too many cheap, and I mean cheap, jump scares. (You know I mean, it's when I bust out the bold font, which I seldom do.) All but one of them served no purpose; plot was not advanced, nothing was heightened, and time was wasted. Worse still, the first act introduced Molly's fanatical christian friend Alexis. Hollywood is still very clear of its stance on Christianity—we're a bunch of raving, abrasive lunatics. I can't say I've seen a flick in recent times that eschews this stereotypical trend. I had hopes for Molly. Alexis, though forceful in her beliefs, seemed to start off on a better foot than most. 'Twasn't long 'fore I was duly corrected; I got whomped. Needless to say, the experience broke the straw for me. I've resolved to show the world (thru my films) not every believer is singular, standoffish, and hellbent on preaching hellfire and brimstone no matter the cost or effect at every turn.

The second act smoothed out—delicately I might add. No clear sense of direction was alluded to, and the mystery surrounding Molly Hartley continued building with a steady tempo. The dependency on jump scares was joyously discarded in favor of abstract atmosphere and mood. The Alexis character seemed to even out, too.

The third act is where the beast woke. Unfortunately, Alexis proved to be the hypocrite the industry blacklists Christians for. Furthermore, the suspense was maintained all the way 'til the end where it was suddenly dumped off in lieu of a quick, unresolved excuse to roll the credits.

I didn't hear any gd's; there was one f bomb. The lead, Molly, was shown in her bra, for no relevant reason. If it weren't for the vacillating ambivalence this movie lovingly embraced, it might have been decent, even with the abrupt ending still in place.
My Ratings: Moral rating: Offensive / Moviemaking quality: 2½

Jacob Keenum, age 22 (USA)
Comments from young people
Neutral—I had mixed feelings about this movie. As a scary movie, it tried to hard to get jumps out of the audience. I just got jaded to it, not very well made. The plot however was very interesting and well-played out, until well the end. When Molly comes to the point of finally losing her soul, ***SPOILERS*** she does, but it's treated as no big deal, or even an improvement! It totally not only betrays the entire movie, but also any idea of ethics.

I liked the cast in this movie, especially the girl who played Molly's “friend” who took her to that party (her name escapes me), but I can't help but think they deserve a better movie. As a Christian, and a film-viewer in General, I would recommend skipping this one.
My Ratings: Moral rating: Average / Moviemaking quality: 3

John, age 15 (USA)
Movie Critics
…all along, the film's intent is to point out what it sees as the powerlessness of faith. The sole Christian character is an outcast and a simpleton. The wicked are vibrant, beautiful and influential. …

Movieguide
…an unexpectedly cynical addition to the teen-scream genre. … Tame and inoffensive (unless you’re on the Lord’s side)…

Jeannette Catsoulis, The New York Times
…On the ‘scary scale,’ this film is tame. …

Tenley Woodman, Boston Herald
…At times, ‘Haunting’ is a scream… dull at worst and surprisingly spooky at best. …

Chelsea Bain, The Boston Globe
…Haunting, all right, but for all the wrong reasons… this inept, incoherent attempt to cash in on young girls who can't buy a ticket to the R-rated ‘Saw V’ (or are too lazy to sneak in) will be out of theaters long before the Halloween pumpkins start to rot. …