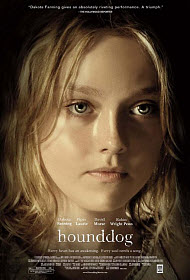 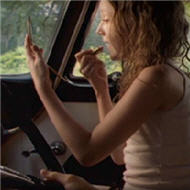 I think I was sexually abused, but I'm not sure. What is sexual abuse, and what can I do to stop the trauma I am facing now? Answer

Drunkeness in the Bible

Themes of the film

“Every heart has an awakening. Every soul needs a song.”

Here’s what the distributor says about their film: “A drama set in the American South, where a precocious, troubled girl (Fanning) finds a safe haven in the music and movement of Elvis Presley.

HOUNDDOG is a provocative Southern tale set in the late 1950's rural Alabama about a precocious young girl Lewellen (Dakota Fanning) and her journey into the beginnings of adulthood and her struggle for freedom from the abuse and repression that surrounds her.

Lewellen lives with her stern religious zealot grandmother, GRAMMIE (Piper Laurie), but spends most of her time down the hill with her much-adored DADDY (David Morse) in his falling down shack.

Daddy is wild and rough and brings home a STRANGER LADY (Robin Wright Penn) who has a mysterious history with him and comes and goes when his drunk and abuse becomes too much for her. But while she's around, Lewellen's longing heart reaches for the strange girlfriend and she attempts to seduce her with song.

Lewellen is deeply talented and finds comfort and safety, as well as a place to put her hurt and rage, in the music of Elvis Presley, even though CHARLES (Afemo Omilami), the wise groundskeeper of the mansion down the road, tries to convince her that ‘there is more to fill out that emptiness than just Elvis.’ Charles teaches Lewellen about snake medicine and imparts his wisdom that ‘you gotta always make good outa what can poison ya.’

Lewellen and her closest friend, BUDDY (Cody Hanford), are caught in a shed during a heavy rainstorm. During the storm Daddy is struck by lightning while driving his tractor and the event leaves him incapacitated as an emotional and mental child. Grammie is convinced that Daddy was stricken down by God to punish Lewellen for her alleged sins with Buddy.

Lewellen becomes Daddy's caretaker and their dysfunctional relationship becomes even more pronounced, Lewellen becoming the parent and Daddy the child. Without any guidance and with Lewellen taking care of the person who should be taking care of her, she begins to move into dangerous terrain.

When Elvis Presley comes to town for a concert, Lewellen is desperate to go but has no money for a ticket. So, Buddy tricks Lewellen into dancing and singing like Elvis for WOODEN'S BOY in exchange for tickets he has to the concert. During the impersonation, Wooden's Boy attacks Lewellen and leaves her innocence behind.

This is the beginning of Lewellen's descent into the cycle of abuse and her own pursuit of self-destruction. It is only Charles who can see the spirit in Lewellen and save her soul. He teaches her to use music, ‘the Blues,’ to turn her tragedy into a gift. Lewellen ultimately finds her true voice, giving her the strength and courage to walk away from her past and into her future”

Positive—…Right out, I will say that there is a rape scene involving the main character, Lewellen, who is a girl child on the verge of puberty (played by Dakota Fanning). Furthermore, this movie has spiritual elements—though not necessarily Christian. An overriding theme is redemption through the power of blues music. Interestingly enough, much of the blues music, especially the ending song, has a definite southern gospel rock flavor. Lewellen's grandmother (played by Piper Laurie) takes Lewellen to church and often berates her on the topic of sin. However, the movie gives us the impression that the grandmother's admonishments to an innocent child are over wrought and repressive. There are scenes where Lewellen's grandmother is seen reading a bible. Finally, however, Lewellen loses her innocence through no fault of her own. Rather she is tricked into going to a secluded place where she is accosted and raped by a teenage boy.

All in all, the grandmother's faith is depicted as hypocritical and oppressive. Redemption is shown as coming from a pantheistic view of the universe, of which the blues are a part. Although the rape scene was implicitly depicted with no actual nudity or sexual expression shown, nevertheless, the inclusion of a scene implying the rape of a minor has stirred up controversy. In particular, the controversy resulted in North Carolina State Senator Phil Berger calling for future films made in North Carolina to have their scripts approved in advance if they the normal production subsidy from the state.
My Ratings: Moral rating: Offensive / Moviemaking quality: 3½

Jeff, age 57 (USA)
Movie Critics
…Dakota Fanning takes an impressive step forward in her career, but that's about the only good thing about ‘Hounddog.’…seems grotesque and lurid…

Andrew Sarris, The New York Observer
…whatever else it is and isn’t, “Hounddog”—notorious as “the Dakota Fanning rape movie,” provoking denunciations and even death threats—is not exploitative. Not even close. … The focus of Hounddog isn’t child-rape, any more than it’s Elvis-worship. The movie is essentially an allegory—of subjugation and emancipation, of liberation through art. …

David Edelstein, New York Magazine
…There's no way “Hounddog” ain't a greasy gumbo of a mellerdrammer (sorry for the language, that's just the effect of too much Southern Gothic cliché gettin’ to me). … Under the circumstances, Fanning is remarkably collected and even dignified. As for the rest of the gang… they ought to be returned to sender. …

Lisa Schwarzbaum, Entertainment Weekly
…“Hounddog” is… trailer trash of the worst kind. …The clichés are thick as the kudzu… the movie's notorious sexual assault scene is neither exploitative nor tasteless. And it does not involve nudity, as some of the movie's more hysterical opponents—who haven't seen it—have charged. …