also known as “I Know What Boys Like”
MPA Rating: 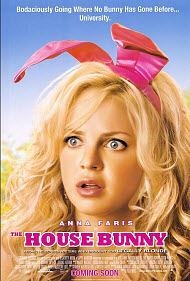 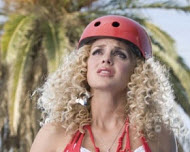 My boyfriend wants to have sex. I don't want to lose him. What should I do? Answer

My friend sleeps around. Now people think I do. How do I fix my reputation and help my friend? Answer

I am not married, and just found out I'm pregnant. What should I do? Answer

“Bodaciously going where no bunny has gone before… university.”

“House Bunny” starring Anna Faris, is a silly, lighthearted comedy about Shelley, a Playboy bunny, who becomes a house mother for a sorority of misfits. Going into this movie, I anticipated that there would be questionable morals and over-the-top sexuality thrown at the viewer (I wasn’t wrong!) but was also curious to see what would come through as the underlying message in the end.

Despite being littered with very scantily clad women (including a fully nude Faris shown from behind) and too many sexual innuendoes to count, “House Bunny” does have some redeeming qualities. First, it was laugh-out-loud funny. Now I know some other reviews out there are touting this as a “Legally Blonde” wanna-be without much solid comedy, but the whole theater was laughing hard through much of this film. Was Shelley, the main character ditsy to the point of being ridiculous at times? Yes. Was she adorable and entertaining at the same time? Also yes… This movie made a solid point of highlighting the value of accepting people for who they are and not conforming to what others want you to be. While the movie took its time getting there, and made light of some serious moral issues (sex outside marriage and modesty to name a couple), it delivered a message of accepting and valuing people for who they are on the inside and not what they look like or where they come from.

Being a Christian, I can’t recommend this movie, due to the factors mentioned above, and I wouldn’t advocate letting teens see this film for the same reasons. However, I saw it with several of my girlfriends (who are also Christian moms like myself) and viewing it for what it was (a relaxing gals night out at the movies) and not expecting much other than some laughs, we weren’t disappointed.

Positive
Positive—This is a Happy Madison Production—i.e., an Adam Sandler shindig. Not all of his usual chums make cameos, only the select few diehard cronies—e.g., Christopher McDonald (the infamous Shooter McGavin from Happy Gilmore… indeed “Shooter McGavin” were the first words outta my mouth when I saw him) and Allen Covert (incidentally, the heavily-bearded bum/caddy from the same early Sandler romp). Many other random folks costar and make cameos. Dude Hanks, Beverly D'Angelo, Hugh Hefner, Shaq.

I laughed. A lot. Seriously. There's much to be laughed at. If there were such an acronym in our vernacular for rolling-in-the-chair-laughing-out-loud, I'd interject it here 'cause that's what I was doing. Sometimes out of pure chagrin. The movie's that kind of movie. Some of the situations and exchanged dialogue were so embarrassing that I had to look away. I balled up in my weathered chair, a vintage relic from pre-stadium seating theaters, cringing in sheer agony. Truth be told, the awkwardness, the eclectic comedic material… it works. Anna Farris pulls off everything, no matter how ludicrous she or the plot turns. The House Bunny rolls on her punches… or punchiness as it were.

Bunny is not unlike any other Adam Sandler flick in that there's sex jokes, scantily clad women, and entirely predictable comeuppances in the final act. Heck, it's an entirely predictable formula from start to finish, just refurbished in vibrant colors and a loose coming-of-age story with loads of estrogen.

Lastly, Bunny ain't as balanced as “Legally Blonde”. I bring this oldie up because the former's poster touts it as being related to the latter in some shape. So… I'll probably take a little flak for saying this, but the appeal in “Legally Blonde” exceeds Reese Witherspoon. Honestly. It's actually a fairly gender-neutral tale, imho, and a darn good one at that. Bunny slightly caters to the female demographic, likely ages 14-27; however, it is ostensibly decent fare in its own right with some things to offer my sex and age group 'sides the superficial.
My Ratings: Moral rating: Offensive / Moviemaking quality: 3½

Jacob Keenum, age 22
Neutral
Neutral—As I have read, I agree with the most part. A lot of things are offensive. Watching “The House Bunny,” to me, was no different then going to the beach. There's nothing wrong with going to the beach in a bikini, but there's something wrong with bikinis at the Playboy mansion? I don't think so.
My Ratings: Moral rating: Better than Average / Moviemaking quality: 3

Ivory, age 22 (USA)
Negative
Negative—I'm getting really tired of Christians trying to find something worthy in an otherwise unworthy and unchristlike movie—seriously—if we continue to see these movies then Hollywood will continue making them and we have no hope of good solid movies coming out of LA.—a little nudity or a little crude humor is a little too much in my book. We are allowing ourselves to conform to Satan's world instead of demanding that his followers in Hollywood conform to ours. When you see these movies, it tells your kids that YES you do think it's funny. Just not for them, and that is so beyond hypocritical that it is no wonder the teen pregnancy rate has been increasing over the years as well as teen sex etc. Get a grip moms—set a standard, and live by it.
My Ratings: Moral rating: Extremely Offensive / Moviemaking quality: 1

Debbie, age 49
Comments from young people
Positive—I saw this movie last night, with my brother and I was expecting a cute comedy. I was not disappointed. Sure there was a lot of immodesty, but it IS Hollywood. Some sex innuendo, language, and corniness was also apparent, but all in all, it was a good movie.

I would willingly see it again, and wouldn't even mind seeing it with my parents.

This is a good teen movie, but a lot of adults in the theatre were laughing as well. Everyone laughed out loud at some point. :)
My Ratings: Moral rating: Average / Moviemaking quality: 5

Jenny, age 16
Positive—I thought this was hilarious with a few good underlying messages to it. There isn't much profanity but the f-word is used once, and b**ch is used throughout the movie.

I wouldn't recommend it to anyone under 15, but anyone else should find it entertaining.
My Ratings: Moral rating: Average / Moviemaking quality: 3

I’d have to say coming from a Christian… not the best movie to see cause its about a girl who lived\lives in a Playboy mansion… and like every second of the movie she's half naked, and, like I said, it was very awkward. For example on one part it shows her bare butt. Plus, they have wild parties to celebrate a girl's no longer virginity… so yeah
My Ratings: Moral rating: Very Offensive / Moviemaking quality: 4½