for crude and sexual humor throughout, some comic violence and language 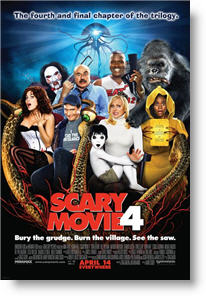 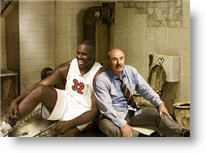 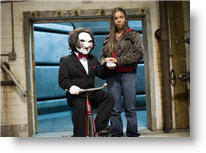 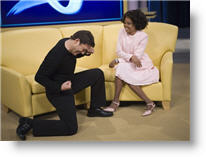 “Bury the grudge. Burn the village. See the saw.”

The fourth installment in the “Scary Movie” legacy is exactly what one would expect. Parodies of pop culture, political and entertainment icons along with more recent blockbuster sci-fi and horror films make up the loosely sewn plot. This film bounces around in parallels and storylines taken from such movies as “War of the Worlds”, “The Grudge”, “Saw”, “Brokeback Mountain” and “The Village”. Fans of the other three Scary Movies are will probably find entertainment and laughter in this latest release, though there are times when it seems as if the filmmakers are reaching too far and trying a bit too hard to gain a laugh from the audience.

Although I enjoyed some of this film, I don’t feel the need to sit through it again. There were other Scary Movie installments which I found much more comical and entertaining.

As a spoof film, there isn’t much one could hope to gain by seeing “Scary Movie 4”. It is designed for people who enjoy cheap shots taken at other popular films.

As with the other three Scary Movies though, there is a lot of content that many will find offensive (Scary Movie 1 / Scary Movie 2 / Scary Movie 3). The language is strong, both in profanity as well as sexual dialogue. The sexual references and crude sexual humor are extreme and constant throughout the course of the film. There is fake gore and ridiculously over-done violence. There are also a few scenes mocking “Brokeback Mountain”, and though they are done for the sake of a laugh—poking fun at the gay cowboy-themed movie—some will find it offensive.

Negative—I watched this movie in it’s entirety and was not very pleased. Many scenes had used toilet humor or were so overt at trying to be funny that they ended causing the audience to shake their heads in disbelief of the stupidity of the overall scene. The movie in general was poor in quality; believe it or not when I was leaving the theatre with a friend a girl walking past us talking to her friends stated that “this movie is whacked” in a negative way. There was only two funny scenes I can remember, and it was at the very beginning with Charlie Sheen and towards the middle of the film with Leslie Nielsen; the rest of the scenes were basically not funny at all and hardly anyone laughed at all. For someone who loves comedies this movie would make the daily news look shine like a golden in comedy depart. If I were you, I would avoid this movie at all costs or end up with the feeling of money wasted like I did.
My Ratings: Offensive / 1

Pat, age 24
Comments from young people
Negative—Gross, disgusting movie, I am a Christian teenager and absolutely was disgusted. No wonder teenagers these days are making so many wrong choices. If a Christian, do not watch it; if you do, you’re giving more advantages to making more …unnecessary movies ruining our relationship with God.
My Ratings: Extremely Offensive / 1

Josh, age 14
Negative—I really hate this movie, and it was such a waste of time and money!! It was very offensive, the sexual “humor” is extreme and “comedy” violence is mild while language is also mild. The very beginning is very disturbing, I don’t know how many times the guy’s private parts were the main point of this movie, and the lady’s privates, too. Very extreme crude humor is used and probably the worst movie made. This is such a dumb movie, too, nothing funny was in it, and it had no point. The father was an idiot and kept hurting his daughter, while the “f” word was used a lot. I’m such an idiot for seeing this movie!! It’s kinda like taking my eyes out and kicking them, that’s how offensive this movie is. I advise none to see this movie. Extremely offensive, I give it a “-1,000,000” on a 1-10 scale 10 being the highest in liking.
My Ratings: Extremely Offensive / 5

Lacey, age 14
Positive—Right up front I should say I’ve never seen the first three Scary Movies, I probably should. I just went out to see this with a friend cause it’s Friday night. With that out of the way, I can say this movie was definitely enjoyable. It’s not a down right riot, it’s not totally pathetic, it’s right in between. It was better than “Date Movie” by a long shot, that’s for sure.

I would tell you what I thought of the story, but I honestly wasn’t paying attention. Something about a Japanese kid’s dad’s heart stopping aliens. I don’t remember, I was too busy watching and waiting for the next joke. The jokes indeed come fast and frequent, some better than others, obviously. My favorite scene of the whole thing was easily the final one with Oprah… that was just crazy. The “Saw” scenes were also quite enjoyable. Some of the jokes do fall flat on their face, for instance the constant usage of a butt with all the aliens (butt spouting lightning in the sky, a butt sucking people into the tripod). Others, however, we’re bust your gut funny. Jigsaw was probably the funniest character in the whole thing. I’ve never seen “The Village” so that part confused me but I think I got the jist of it.

Most of the jokes, however, were pretty unoriginal and predictable. You could easily tell when a joke was coming seconds before it happened and most of the time you could probably predict exactly what it was going to be. For example, when the grudge kid begins crawling down those stairs in his creepy way, you know he’s going to fall down it. Low and behold, he does. When Leslie Nielsen started talking to the UN about reversing the polarity of a laser that takes people out of their clothes, you know he’s going to take the clothes off the whole place. Bingo. It should be noted that before seeing the movie, I hadn’t seen the trailer or any of the TV spots, my friend informed me afterword that both these scenes were shown in them.

Leslie Nielsen, by the way, was hilarious in this. Sure, his character has been done a thousand times but it worked fine for me. I too wanted to know what happened to the duck. However, just about every single girl (and a few guys) screamed when he lost his clothes. I almost did as well… that’s… just… made me shudder.

As for objectionable things, sure, you’ve got a fair share. But the thing is, this movie doesn’t deceive you into entering a movie and being surprised by all kinds of objectionable things. Upon watching the trailer for it when I got back, you can clearly see from it what your going to get out of this movie. True, it does push it’s PG-13 rating at certain points, but it doesn’t go over the top. If your easily offended, avoid it (your probably not the type who’d enjoy this kind of movie anyway). But if you can take a bit of gross out humor, go for it. I only recommend you cover the eyes of younger people when Leslie Nielsen loses his clothes. Not because it’s overly objectionable, but because it’s libel to scar them for life.

All in all, the movie is enjoyable. I recommend folks see it, but it probably is one you can wait for on DVD. I only urge folks to not over analyze it, it was a simple parody movie and nothing more.
My Ratings: Very Offensive / 3

Kevin, age 17
Positive—Wow! This movie was reeeeallly hilarious. I did like the 3rd movie better, but this was still really good. It will definitely offend many people, but it didn’t really offend me. But, showing that old guy’s butt was a little bit too disgusting, but it was pretty much hilarious! Uhm, don’t go see this if you get offended easily or even semi-easy. You WILL be offended. I don’t recommend taking children under the age of 13, DEFINITELY. It has a lot of humor that they would not understand and that parents probably won’t want to expose their young kids to. But for teens and adults, its great!
My Ratings: Offensive / 4

Bree, age 13
Negative—When I first saw the commercials for this movie, I thought it was definitely funny. Although some parts were quite hilarious, the movie was really worst than the third one. There were barely any redeeming qualities, and how it avoided the R-rating is far beyond me. I really wouldn’t recommend this movie for anyone except for those who have become immune to the senselessness of some of these movies.
My Ratings: Very Offensive / 2

Briana, age 14
Neutral—Though the language was quite frequent, it wasn’t overly too much. The crude humor was another downer, though not like the first two. The gags, though, were hilarious. The funniest were “The Village”, “War of the Worlds”, and “Brokeback Mountain”. The acting was okay, although somewhat lacking with Dr. Phil and some others. I would not recommend this for people under 14. [I am younger but, whatever.] Overall funny, although crude.
My Ratings: Average / 3

Pittsburgh Post-Gazette
…More of the same, but less funny…

Christy Lemire, The Associated Press
…their movie should be projected onto a Glad body bag… installment four is the most scornfully made yet…

E! Online
…as ever, the jokes are a jumble of the gross, the baggy, the raunchy, the mistimed, and—every once in a while—the refreshingly incorrect…