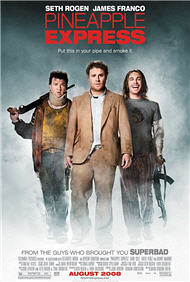 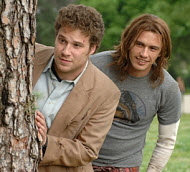 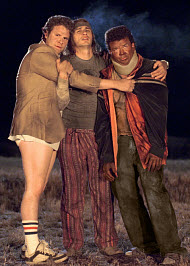 “Put this in your pipe and smoke it.”

Here’s what the distributor says about their film: “This summer, the guys who brought you ‘Superbad’ reunite for the action-comedy ‘Pineapple Express.’ Lazy stoner Dale Denton (Seth Rogen) has only one reason to visit his equally lazy dealer Saul Silver (James Franco—“Spider-Man”): to purchase weed, specifically, a rare new strain called Pineapple Express. But when Dale becomes the only witness to a murder by a crooked cop (Rosie Perez) and the city’s most dangerous drug lord (Gary Cole), he panics and dumps his roach of Pineapple Express at the scene.

Dale now has another reason to visit Saul: to find out if the weed is so rare that it can be traced back to him. And it is. As Dale and Saul run for their lives, they quickly discover that they’re not suffering from weed-fueled paranoia; incredibly, the bad guys really are hot on their trail and trying to figure out the fastest way to kill them both. All aboard the Pineapple Express.”

Comments below:
Negative
Negative—The entire message of the movie was basically, well, to smoke weed. There is really no reason on this planet any Christian should watch this movie, a warning I cannot stress enough. The language is extreme and almost tops “Alpha Dogs” number of F-bombs, which is saying a lot.

Almost every second of the movie is spent smoking weed, buying weed, talking about weed, or purchasing weed; seriously, I'm not kidding. This is probably the worst example to small children I could ever imagine giving, which is why bringing your children or even teenagers to this is a moronic idea. The only reputable message in the entire movie is about friendship, through thick and thin, which I guess is exemplified through Dale and Saul, the two main characters. Biblically-speaking, the Bible tells us to put a harness on our tongues and treat our bodies like temples of the holy spirit, something “Pineapple Express” fails to represent in the extreme.

I wouldn't recommend this movie to any believer who considers themself a follower of the most high. …
My Ratings: Moral rating: Extremely Offensive / Moviemaking quality: 2½

Napoleon Bonaparte, age 38
Comments from young people
Neutral—“Pineapple Express” is one of the funniest movies I have seen in a while. It actually made me laugh out at some uproariously funny moments. The performances were good, the screenplay was well-written, and it was a fun way to spend an hour and forty minutes of… However, the content of the movie is rather strong. While the sexual content is kept merely to dirty jokes and some short sexually-oriented conversations, blood is used a little more then marginally in some of the action scenes, but the biggest problem is the use of strong language and marijuana. The movie has a total of 161 f-words among many other curse words; marijuana is used heavily throughout the movie, and even the title is derived from a type of weed that plays an important role in the film. …
My Ratings: Moral rating: Extremely Offensive / Moviemaking quality: 4

Jonathan, age 15
Neutral—I watched this movie with a group of 5 other friends who all happened to be Christians. All of us laughed long and hard over a movie that, no matter what your opinion of the over all message, was hilarious. And our feelings ranged from “that was hilarious, let’s watch it again” to “that was hilarious, but it had way too much language.”

The comedy’s violence is based mostly around slap-stick style violence; ex. a police car hits a main character who is carrying 2 large red slushies which splatter the wind shield and leave the officer believing she has blood covering the entire front of the car. Sexual content is VERY limited for an R movie or even a PG-13 movie (no nudity, sex scenes and only several crude comments), which is a nice surprise considering this is from the guys who did superbad. The violence is frequent, but not gory, another surprise for an R movie. The films failing is its language, many swears pepper the conversations.

Weed fills this movie, FILLS IT. bags of it, boxes of it, bongs of it, joints of it. The movie is named after a rare form of ganja after all. So if you have a problem with weed this movie isn't for you. The 2 main characters even sell some to already addicted 7th graders to raise some quick cash (one of the men is arrested for this).

So, I wouldn't say this is a GOOD or EDIFYING movie; it's for entertainment. There are some messages of staying loyal to your friends no matter what. It has subliminal messages of smoking leading to trouble. But in the end the characters don't show any intentions of quitting. It's a funny, really funny, movie which many Christians might find suitable for themselves and their (age appropriate) friends.
My Ratings: Moral rating: Better than Average / Moviemaking quality: 4

Justin Chang, Variety
…‘Pineapple Express’ is one joke over the line… If there's a vague feeling of dissatisfaction from watching ‘Pineapple Express,’ it's probably because its creators seem to be repeating themselves…

Movieguide
…despite a surprisingly exciting action-packed finale, the film's buddy-movie camaraderie seems a little forced, and the spaced-out dialogue doesn't deliver as often as it should. …[2½/4]