for sequences of intense violence, some disturbing images and brief strong language. 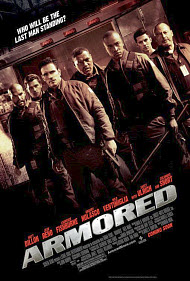 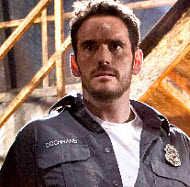 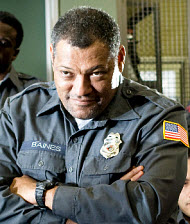 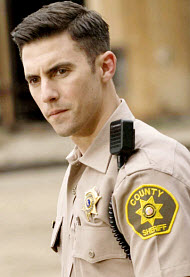 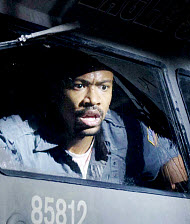 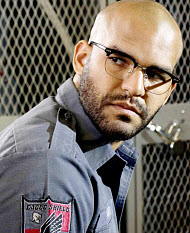 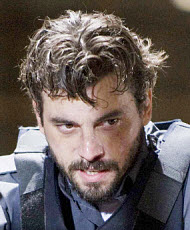 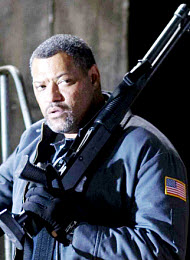 “Who will be the last man standing?”

“Armored” is a male flick through and through. There aren’t any female leads that cause distraction, nor are there cheesy plotlines or over-the-top gimmicks. It’s simply a movie about a group of armored guards who want to pull off the perfect heist in order to rob over 40 million dollars. The heist begins within the first thirty minutes and five minutes later, the heist goes wrong. While the movie carries well with its strong cast, a slightly more complicated script would have made it an even better film.

After his parents’ death, Ty Hackett (Columbus Short) is an Iraqi veteran who’s struggling to make ends meet and trying to avoid foreclosure on his house. In addition, he has custody of his rebellious younger brother. During the day, he works as an armored guard with some close friends. Among the guys at work, he’s seemingly the closest to Mike (Matt Dillon) who knew Ty’s parents. When Mike confides in Ty that the group of friends intends to pull off a heist, Ty initially refuses. After a surprise visit of the Child Welfare Services, Ty decides to partake in the heist in order to avoid losing custody of his brother.

With some careful planning, the heist begins to go perfectly well, with the men laughing at their newfound fortune. While hiding the money at an abandoned factory, an unexpected homeless man becomes an unwanted witness. Within the chaos which ensues, the man is shot. Rushing to his side, Ty attempts to bring aide to the man before he is finished off by Mike. With things quickly unraveling, Ty locks himself in the armored truck with the remaining money.

The plot is formulaic to the core, and, if not for the cast, “Armored” would have most likely been a direct DVD release. All the ingredients of the botched heist, friends turned to enemies, and the main character’s spontaneous ingenuity are within the mix. However, “Armored” has genuineness when it comes to the raw, conflicting emotions one might feel when countered with the dilemma of being caught or going further into the realm of evil in order to satisfy greed.

Before committing to the heist, Ty made Mike promise him that no one would get hurt, a promise which the friend readily made. I’m sure Mike meant it, at the time. They never imagined that there would be a homeless man added within the heist equation. However, with the extra set of eyes, it was determined to eliminate him. Ty refused to participate any longer and went with his conscience. While the others argued, they eventually relented and proceeded to go along with the heist and murdered, when they deemed it necessary. In the wake of greed, this solution is indeed evil, but completely realistic. This correlates with 1 Timothy 6:9-10:

“People who want to get rich fall into temptation and a trap and into many foolish and harmful desires that plunge men into ruin and destruction. For the love of money is a root of all kinds of evil.”

Christians have been hit by the recent economic times. We often suffer money issues just like any other person. However, those who have their foundation firmly planted within Christ have the comfort of knowing that God is loving and just and will provide for our needs.

Interestingly, there is one guard who’s shown to be a Christian. In the beginning of the film, he reads Scripture and mentions how God saved him. I thought he’d be one of the emotionally swinging members of the group, but turns out he murders someone and then kills himself after asking if God would forgive him. While Christians suffer temptation, we should be grateful that God gave us the Scripture for guidance on how to live a life full of godliness. And within the chapters, there are plenty of warnings about staying away from sin and its enormous consequences.

I do not personally recommend “Armored.” While there is no sexual content, the cursing is quite heavy with 27 uses, including 3 GDs and about 15 sh*t. There are several murders by shootings, stabbings, and explosions; these are realistically depicted and rather disturbing. It’s definitely noteworthy how Ty stood up for what was right even at the risk of his own life. If one would like to read a similar story of a murderous man who later became a Christian, I recommend the wonderful story of Paul.

Positive
Positive—This turned out to be a really good movie, I didn’t expect it to be that good. I was going to see another movie, but the people that I went with wanted to see this movie, and I am glade we did. Not only did this movie have a great storyline, it showed that it is never too late to change your life and do what’s good. A lot of movies out there are so corrupt and people love them for that, but this movie was different.

It also portrayed an African American in a good light, which is rare now a days. This movie shows that it’s OK to make the right decision in a bad situation. The action was good, and the acting was really good, because it had some big name actors in it. There is a couple of s-words and 1 f-bomb, so the movie wasn’t perfect. Thank goodness there were no sex scenes in the movie though. Not having a female present in the movie did leave a void in the sake of reality. It’s just a good all American movie that makes you feel good about being a hero and standing up for what is right.
My Ratings: Moral rating: Offensive / Moviemaking quality: 3½

Negative
Negative—This was a gory, negative movie. I could have gone my whole life without watching it. Not much cussing and no sexual stuff, but lots of violence, gore, blood and evil things. It was made very well, the acting was believable but don’t waste your time. Not something a spirit-filled Christian needs to fill their mind space with. It certainly didn’t improve my life, it left me feeling negative. Sure, the guy tries to get out of doing what they are doing and rescues some people, but he was going to rob the trucks just like everyone was. I see a lot of movies, and there is no need to watch this movie.
My Ratings: Moral rating: Very Offensive / Moviemaking quality: 5

Samantha Taylor, age 35 (USA)
Negative—…this movie is sooooo one-dimensional. It definitely fits the basura bin criteria. That having been said, it took 5 or 6 separate sit-downs to (collectively) make it through the whole film. All 88 minutes of it… 'twas really a stretch and somewhat of an eyesore oddly enough.

“Armored”’s biggest drawback is its script; I swear it feels like me and a bud penned it after school when we were 14, and we couldn’t drive or do anything more inventive with our time. That’s about how much thought was put into this movie—the cerebral equivalent of a box of cornflakes.

Think I’m too harsh? Listen here Budrow, on top of a lackluster story, “Armored” commits a cardinal sin. To the average taxpaying Joe, this next item will go unnoticed. But to the blue-collared, gainfully-employed enlisted turkeys of Air Force motorpools across God’s green earth, this detail is painful to watch. And that is the film’s so-named vehicles: the armored van’s used for hauling massive amounts of cash. Can’t fool me. I look at a van everyday, a G-Van as the story goes, and for anyone else in the above category, you’ll readily agree with me when I say this “armored” monstrosity is nothing more than a purtied-up G-Van. Sure, the body is shaped a little different than a G-Van (aka a bread truck). But there’s nothing reinforced on these movie vans. Nothing that’ll really stop anything other than a .22 round as the movie would have you falsely believe. Go look at an up-armored HMV or MRAP. That armor is beastly thick and mega hard to open, well, more so than your ordinary door. They got some kick! Now look at your shop’s mobile truck and compare it to the vans in "Armored". The doors open and swing quite freely, and that’s the dead giveaway in "Armored"—i.e. the doors open and close freely, with no indication of weight or bulk. I’m not a bodyshop guy by trade, but I’ve been on the playing field long enough to spot an impostor. Go Uncle Sam.
My Ratings: Moral rating: Offensive / Moviemaking quality: 2½

Mega Tron, age 24 (USA)
Comments from non-viewers
Negative—I rented this movie, started to watch. About 15 minutes I turned it off, after they bashed the Iraq war. Quote, "You must have made a difference over there?" Response by guy just returning from war, shaking head no, "No, no way." I could tell right away an anti-war movie. I didn’t have the time for it. I don’t think any Christians would be in a movie like that. And would be the director and producer certainly not Christian and bashing the war, so why go along with all the other unGodly influences they would be propounding in 90 minutes. Subtle things can take us way off track.