for bloody violence, language and some nudity. 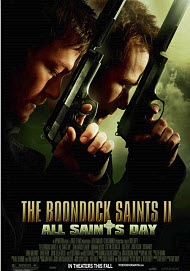 anger in the Bible

“Two brothers do battle against the Boston mob”

“Boondock Saints II: All Saints Day” is the second installment of the brutal vigilante escapades of Irish Catholic fraternal twin brothers, Murphy and Connor MacManus. Having wiped out a good portion of the Russian mafia in Boston, the Brothers have gone into seclusion in dear old Ireland with their recently reunited father. The movie begins with an old enemy “calling” them out, by having an innocent priest savagely murdered back in Boston. As vigilante executioners of god’s ordained justice, they have no “moral” choice but to return, in order to render the purpose they have been called to.

The Brothers return to Boston picking up a strangely paired Hispanic bloodletter who shares their desire for justice. He does not retain the same moral and biblical convictions of his mentors, but deeply shares the need to end lives of hooligans and hardcases of Boston. The Brothers also reacquaint themselves, personally, with the FBI having a new agent simultaneously track them and help them. Essentially using the same mysterious profiling, this agent only changes in gender from the first installment. Moving through a fairly predictable set of chapters, the threesome end lives in gruesome and adventurous fashion, banter about in sophomoric brotherly beatings, and end up in impossible situations that only divinely directed assassins could prevail.

The appeal of this movie seems to be in its vigilantism, its attempt to wield hand weapons of mass destruction, in the brotherly banter of Murphy and Connor, and in its perceived seal of approval by a divine source. While these appeal somewhere down deep to the core dark portion of some hearts, they are not carried out in an effective manner to duly satiate that dark need. At one point, the Brothers enter what I would call a candy store of weaponry, only to exit with their signature dual fisted magnum autos with silencers. Perhaps the director wanted to avoid the use of heavy machine guns, rocket launchers, snipers and just about any other sort of loud, juicy weaponry that hung on the wall for the more sophisticated and surgical use of silenced pistols. Sort of a let down though.

So the story finally ends with a large body count, victory for the vigilantes and the predicable, but sad, loss of one of the secondary heroes. And, we are left with an unfulfilling story, a layer of filth on our hearts and minds and the hint that there could be a third attempt to pollute the theaters with more violence and less substance, albeit, another 10 years down the road. Somewhere in the middle of the film, Connor captures the essence of the entire movie with his signature line: “Let’s do some gratuitous violence.”

As a Christian, I cannot imagine one person on the face of the planet that could conjure up a good enough reason to endure this movie (sadly, I have become the sacrificial lamb on this one). The language is vile, extreme, overwhelming and lengthy. The death count and method is unreportable. The purpose weak and ungodly. The “F” word is used so many times that it becomes nauseating. And, of greatest offense beyond the aforementioned, Jesus’ name is thrown about without any respect and, in many instances, as a curse word.

The whole premise of the movie is that the Brothers are somehow ordained by God to do these despicable acts, as if He needed such vigilantes to do His bidding. God, of course, does not need us to carry out justice, in any fashion (let alone savagely), while reciting prayers over the corpses, as if to lay them to rest. Job 8:3 says, “Doth God pervert judgment? or doth the Almighty pervert justice?” While God’s justice is sure, it is surely not in our hands to dole out.

I can’t imagine Catholics being at all pleased with this movie either. The Brothers are shown on multiple occasions, partaking in mass, praying at the altar, confessing and praying over the slain or soon to be slain. It really makes light of the traditions Catholics adhere to and certainly does not follow Scripture, in any regard.

There are so many Biblical commands that are violated in this movie, it’s almost senseless to address them. Some that stand out boldly are Exodus 20:13, “Thou shall not murder,” Romans 12:19, “Never take your own revenge, beloved, but leave room for the wrath {of God,} for it is written, ‘VENGEANCE IS MINE, I WILL REPAY,’ says the Lord,” and Ephesians 4:29, “Let no unwholesome word proceed from your mouth, but only such {a word} as is good for edification according to the need {of the moment,} so that it will give grace to those who hear.”

While this movie seems to attract some sort of cult status, despite its poor storyline, it just is not acceptable. Please pass on it and find an action movie elsewhere.

Comments below:
Positive
Positive—A few mentions. The violence, though seemingly more prevalent than in the first film, but I could be wrong, is constrained, all things considering. Rather, let me clarify. I distinctly remember rating the violence as HEAVY in the “The Dark Knight.” That’s because it is… the way the Joker went about killing people… was merciless, at best. Nolan, the director, handled the gloom with tacit care, but nonetheless. The acts committed (usually offscreen) were sadistic. Contrast that with Saints II. These ol’ Irish brothers run around shooting folks up like it’s Dekalb county GA. But the firefights are slowed down, way down, and the feel is all too familiar with these shoot-em-up flicks. Blood gushes out in hefty spurts, always in sync with the slow motion. I won’t call it artistic because let’s face it. Sin is sin, and the Lord hates hands that shed innocent blood. “The Lord examines the righteous, but the wicked and those who love violence his soul hates.” Somewhere somehow along the way, I, you, we… have been desensitized. We too should abhor violence, but when it’s polished up and delivered with catchy Latin rites, apparently it’s okay.

But I digress. The eponymous Saints go around guns blazing like it’s high noon in a Sam Raimi western. They shoot, backed by some diluted sense of self-righteousness or belief in a higher calling, but they don’t maim and terrorize like Nolan’s Joker. Does it justify anything? Not at all. Bearing the obvious moral dilemmas in mind, The Boondock Saints II ALL SAINTS DAY is a tough nut to crack. As a christian, I’m torn by the presentation of violence in this film. As an avid moviegoer, I do enjoy the production as a whole. Great lengths were taken to ensure the original cast returned after 10 years. Believe me. A sense of cohesion… no, that’s not quite the right word… effort. Yeah. A near tangible effort was penciled into every line of every page of the script; I mean really. You have to go the extra mile (as trite as that sounds) in order to mold a sequel and have it walk hot off the press a decade later. Lo and behold, that effort is there, and though the F bomb count is still sky high, “All Saints Day” is a polished product, worthy of being a successor to its source material.
My Ratings: Moral rating: Very Offensive / Moviemaking quality: 4

Mega Tron, age 23 (USA)
Neutral
Neutral—Let me first say, I did like this movie and was looking forward to it. It did make me laugh a lot. The interaction between the brothers was very amusing. They were pranksters and typical sibling brothers, often fighting while on their way to do their justice. They did a great job pulling off an action movie, good ol’ shoot em up, with some real laughs. I don’t remember the last movie I laughed at like I did this one. Even comedic movies.

That said, this was a very offensive movie. There was a great deal of foul language. The “F” word was said quite often and the “D” word, referring to male anatomy, was also used. Comments using that word were disturbing to me and I really could have done without that. There were numerous comments about “up the a--” used in different contexts. Again, something I could have done without. Of course, there was a great deal of violence.

The brothers did seek to right a wrong in their vigilante justice. There was a bare behind in the movie. The man was nude but when he was seen from the front, there was always something cleverly placed in front of him so you never saw frontal nudity.

From a Christian standpoint, I’d have to say one should not see it simply because you are very likely to be offended. You have to be quite lax in what you are willing to see. I rated this as neutral because I am stuck between this movie being offensive and really liking the movie.

However, as a Christian I cannot endorse it as a movie Christians should see. One has to make that determination on their own, going by what types of movies they already watch and how permissive they are in listening to foul language and violence. I do not like to hear or use foul language and this movie goes beyond the average R movie in it’s foul language. Do NOT take children, even older ones, to this movie.
My Ratings: Moral rating: Very Offensive / Moviemaking quality: 4

Movie Critics
…the pic feels like a throwback to the likes of “Dirty Harry” and “Shaft.”… it is refreshing to take in stunts without the distraction of shaky cameras and hyperkinetic cutting.

Peter Debruge, Variety
…at least a quarter of his relentless gags may make you laugh… cartoonishly violent…

Mike Hale, New York Times
…two Irish brothers from Boston who like to fight, drink, pray and kill members of organized crime in super slow-motion while sliding across a floor. … some legitimate creative flourishes… [C]

Gary Thompson, Philadelphia Daily News
…Only minutely more competent than its predecessor in terms of tone and pacing… [1/4]